Last week Sir (just about for now) Philip Green appeared before a parliamentary select committee looking into the collapse of one of his former companies, British Home Stores. (Sort of fittingly, his photo is on the home page here.) Green had postured from his home in Monte Carlo, from where his wife nominally runs his business empire, saying he wouldn’t appear unless Frank Field MP stepped down from the inquiry on the basis he had already decided that Green should contribute £600 million to plug the gap in the company’s pension fund, a company from which Green and his family had drawn something like that amount in payments and dividends over 10 years before he sold it for £1 to Dominic Chappell, a three-time bankrupt and charmless chancer with no retail experience who bought BHS with money that was apparently anyone else’s except his own, this likely being because he doesn’t have any left having spent all he did have on daily visits to the same tanning salon that Tony Blair uses. The serious issue was the prospective loss of 11,000 jobs and a £571 million deficit in the pension scheme.

“I am not prepared to participate in a process which has not even the pretence of fairness and objectivity,” complained Green, “and which has as its primary objective the destruction of my reputation.” Still, last week the billionaire was there, and there for no less than six hours. “Nothing is more sad than how this has ended,” Green told the committee. Sadder still, of course, if you were one of the now ex-employees on zero-hours contracts and no yacht in the Mediterranean.

Among the list of sanctions Green was facing was the removal of his knighthood (I just checked that wasn’t the same as manhood, since if the Queen were to do that with a sword I’m sure it would be most painful) as well as judgement as to whether he was a “fit and proper” person to be running a business. Tim Farron, leader of the Liberal Democrats, said: “Philip Green should be stripped of his knighthood. Every day he keeps his gong it shames the honours system” – though many of us thought that day had long gone. I’m not competent to judge the ‘proper’ bit but Green does look a little bit fitter than Mike Ashley, owner of Sports Direct, who was recently up before the same committee and, frankly, seemed to have bested the big man from Monaco in the pie-eating competition. (BTW, Massive Mike has/had designs of his own regarding getting his hands on BHS.) 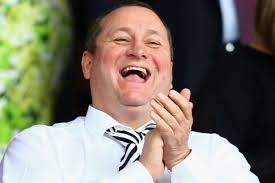 Green told the committee he would “sort” (whatever that meant) the problems with the BHS pension scheme. “I want to give assurance to the 20,000 pensioners that I am here to sort this,” he declared. However, there were no details; no cheque book either. He said the sale to Chappell had been “an honest mistake…we found the wrong guy”. His use of the plural was instructive.

Admitting the crash of the company was “my fault” he pointed out that it was also the fault of bankers Goldman Sachs – notoriously described in a 2010 article in Rolling Stone magazine as “a great vampire squid wrapped around the face of humanity, relentlessly jamming its blood funnel into anything that smells like money” – because, without them having backed Chappell, Green would “one million per cent” not have done the deal. Accountants Grant Thornton, lawyers Olswang and the Pensions Regulator were also invited to share the stage…er, sorry, the shame. Which I suppose might be fair enough. After all, there is plenty of shame to go round in this sorry story.