FINANCE: The price of a name in Qatar…and Malta meltdown

They are not short of money in Qatar. Granted, the men who are working on building the stadia that will stage the 2022 World Cup in that small Gulf state definitely deserve to be making a load more, but the ruling Al-Thani family have a lot of dosh to flash. In London, they have taken control of old institutions like Harrods and wannabe new ones like the Shard. They reportedly have around £3 billion worth of investments in New York. In Paris, they bought Paris Saint-German (PSG) football club and as a present for its fans they acquired the star Brazilian forward, Neymar, from Barcelona for a world-record transfer fee of £200 million. As the Arsenal manager, Arsene Wenger, observed: “Once a country owns a football club, everything is possible.” To be fair, the Al-Thanis had also played it the other way – in 2010, they authorised a five-year shirt deal worth £125 million for the Barcelona team to carry the words ‘Qatar Foundation’ on their shirts. The Qatar royal family also shelled out around £200 million to buy The Card Players by Cezanne, thereby valuing two painted French peasants at the same price as a feted footballer.

In also buying that World Cup in five years time the Qataris caused much controversy, not least for taking the tournament to a place in the world which geographically could hardly be less suitable for the purpose. But the winning bid aroused widespread accusations of bribery and corruption, too, which subsequently led to the removal from their posts of Sepp Blatter, the FIFA president, and Michel Platini, his UEFA counterpart. The photo on the home page shows one of the stadiums currently under construction, and my upcoming ‘Foreign’ blog will also look at that misplaced footy fiesta as well as other aspects of Qatari life right now. 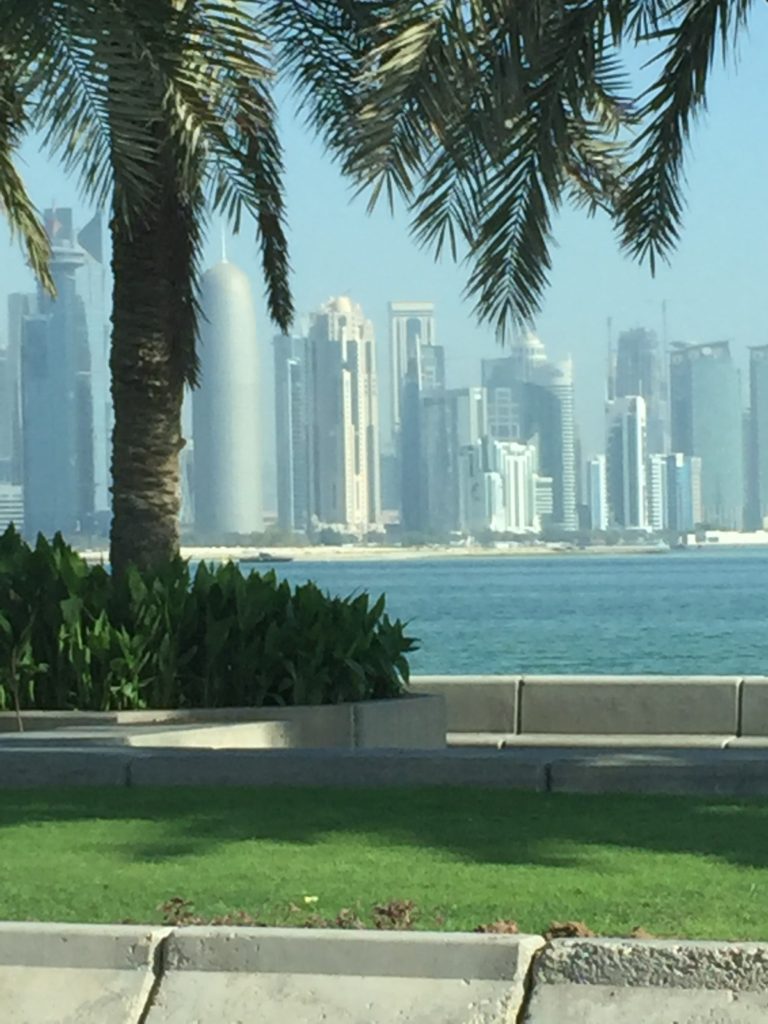 Rising high from this desert kingdom, the towers of Doha are emblematic of Qatar’s soaring ambition

Mention of countries which have a questionable financial reputation returns us to the Mediterranean island of Malta. In my first ‘Finance’ blog, posted over two years ago, I referred to the fact that the country had decided to sell citizenships: that is, if you have enough money to buy a property at the requisite price, you may become eligible for the prize that is a Maltese passport. Which, of course, means you become eligible for the rather more substantial prize that is a European Union passport. As I noted then, “it’s pretty much an open invitation to Russian gangsters, dodgy sheiks or African despots”. You may have read in the press or seen on the TV news that last week a woman journalist called Daphne Caruana Galizia was murdered by a car bomb in Malta. She was a brave and relentless campaigner against such things as the ‘cash for passports’ policy and the way in which what she called a “culture of impunity” had been allowed to flourish on the island. In her last blog, posted less than an hour before she was killed, she wrote: “There are crooks everywhere you look. The situation is desperate.”

Her family have suggested that among the people she was talking about, people whom she alleged had effectively turned her country into an offshoot of the Mafia, was the prime minister, Joseph Muscat. Yep, one of those guys who turns up in Brussels telling Theresa May where she can stick it. I wish we were not leaving the EU but given the present political/judicial shenanigans in Hungary and Poland, the increasingly ugly Spain/Catalonia dispute, and now this Maltese atrocity (the Pope sent a letter of condolence, an almost unheard of action for him to take in respect of the death of a private citizen), maybe we might indeed one day feel that we are better off out of it? Perhaps. Then again, while Qatar can buy up trophy assets around the globe, it cannot buy membership of the EU. Then again, I’m hoping there’s no chance that any Sicilian friends Malta has will be able to deliver it the World Cup in 2026…

68 thoughts on “FINANCE: The price of a name in Qatar…and Malta meltdown”