Even aviation giants could not quieten Lauda

This is a brief tale about one brave and determined man, Niki Lauda, who took himself to the top of the world in Formula 1 and then built a career in the aviation business. It’s also a story about bad stuff that can happen.

Born in Vienna in 1949, Andreas Nikolaus Lauda was the world drivers’ champion three times – in 1975, 1977 and 1984. In between the first two of those triumphs, he was involved in a horrific crash in the German Grand Prix at the Nurburgring in 1976. His car caught fire, the flames causing severe burns which marked his face for the rest of his life. For a time, it seemed the rest of his life might not last very long. In hospital, a priest administered the last rites. If you have not seen it, the film Rush tells the extraordinary story of Lauda’s duel for the world championship that year with the British driver, James Hunt. 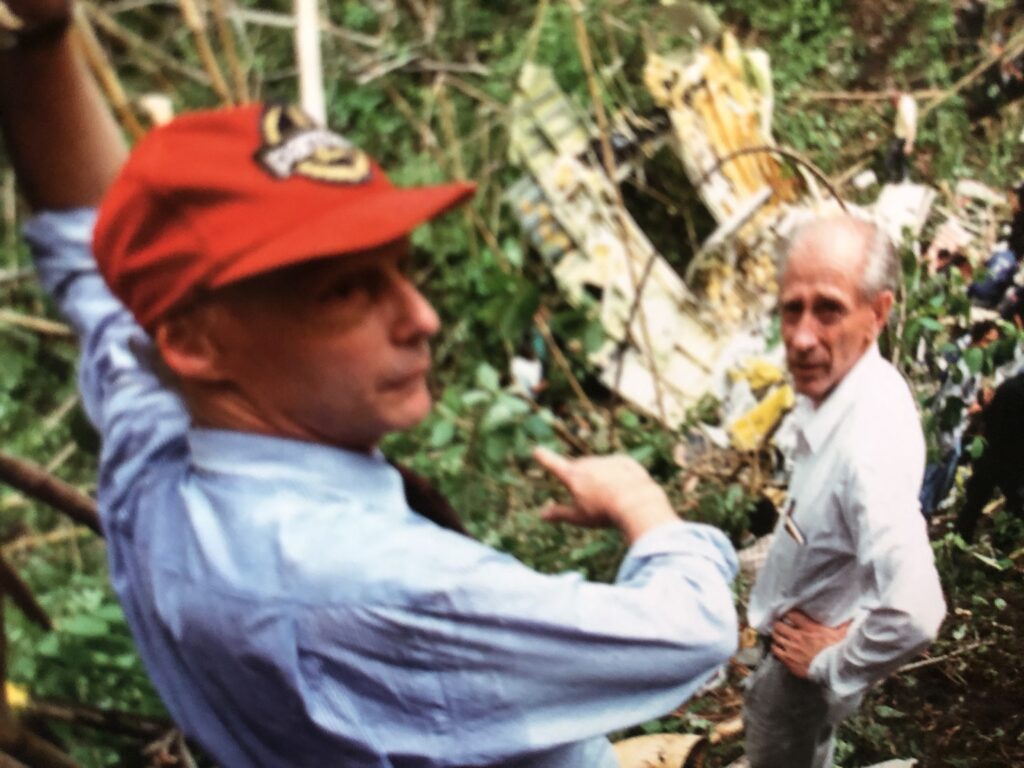 From Maurice Hamilton’s biography of him, Lauda (left) at the scene of his plane’s crash in Thailand

But on to the aeroplanes. As if he had not got enough going on in his life, Niki Lauda formed Lauda Air in 1979. On May 26, 1991, Lauda Air Flight 004 left Bangkok for Vienna. The plane was a Boeing 676. It never completed the journey. Lauda learned of its disappearance while he was at home in Vienna. Immediately he flew to Thailand in order to visit the crash site. The black box recorder had been destroyed in the heat of the fire but on the ground Lauda noticed the thrust reverse had been deployed on one engine but not on the other. Lauda knew this should not happen but – while relatives of the dead had funerals to attend – it was the reputation of his airline that was on the line. He flew to Boeing’s headquarters in Seattle and demanded to use their simulator. He demonstrated that when the thrust reverse was pushed out – “which it should never do when you’re in the air…the aeroplane turns over. You can do whatever you want, but you cannot control it”.

He insisted Boeing put out a statement so the bereaved would have an explanation as to what had occurred. They refused, saying there were legal complications. Lauda said: “OK, this is what we’ll do. Tomorrow, I will hold a press conference and say we are going to take up a 767, load it up like it was with my two pilots, deploy the thrust reverser in the air and everything will be OK. I’ll be on board and you can show me that it works.” With that, Lauda returned to his hotel. With that, Boeing issued the statement he wanted.

Moving on…the Boeing 737 MAX was the fourth generation of the 737. It took its maiden flight on January 29, 2016, and gained FAA certification in March 2017. Since then, the plane has been involved in two fatal accidents. On October 29, 2018, on an internal flight in Indonesia, Lion Air Flight 610 fell into the Java Sea 13 minutes after take-off. On March 10, 2019, Ethiopian Airlines Flight 302 between Addis Ababa, Ethiopia, and Nairobi, Kenya, crashed some six minutes after take-off. A total of 346 people died on those flights. Investigators subsequently found that a malfunction in the operating system had programmed both planes to go into a dive. The 737 MAX was grounded later in March 2019 and has not flown commercially since. Plus ca change…

Niki Lauda ended his career as chairman of Mercedes Motorsports which, not least thanks to Lewis Hamilton, is the company with the pre-eminent racing car on the F1 grid today. Lauda died in May 2019. He was some man who lived an extraordinary life.