Airline loyalty cards are handy things. I have a British Airways one, which is sensible enough given that I live in the UK, even though one immediately becomes aware of the drawback that one feels almost duty-bound to use the airline with whom you have this relationship whatever the price offered for the comparative flight by another carrier. Consequently, whenever I’m at Heathrow, it’s usually at Terminal 5 looking at a bunch of BA planes (as indicated on the home page).

As I’m sure you’ll know, the way the scheme works is that you get awarded points every time you fly. Each airline has its own rules so there are no hard and fast guidelines as to how many points a flight to New York will get you as opposed to one to Newcastle. But the system can come in very handy. And the best aspect of air miles is that they last forever – or at least until you use them. They are not time-limited. A few years ago I was travelling to Chicago with BA. The flight was very busy both ways in economy (i.e. I would have to have been wait-listed one of the ways) but there was space in club coming back. Using real money, this upgrade would have set me back something over two grand. Paying for it with my air miles cost me a few thousand of those but it felt like I was getting it for free. I once had a flight to the Middle East, which is quite a long trip and one of the ways it was at a very anti-social hour. Using air miles got me an upgrade, which again felt like it had cost me nothing. 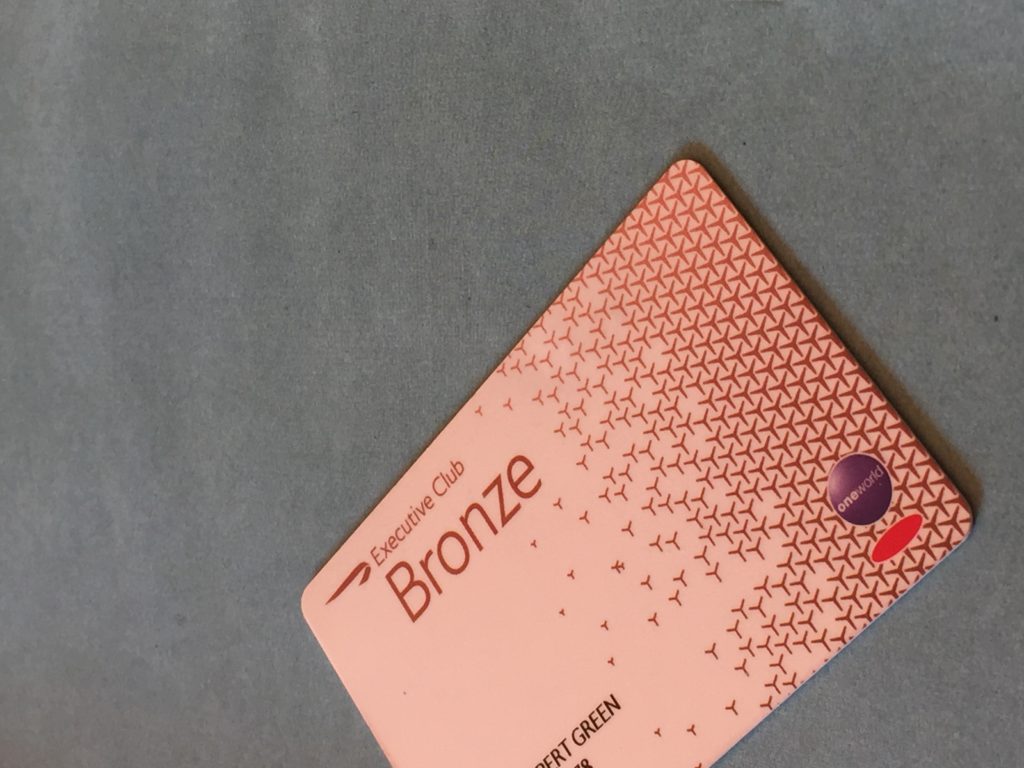 Last year I need to book a return flight to Nice, with the outbound flight being on Easter Monday. It would have cost something like £750 at best. Using air miles, and flying business class one of the ways (always a bit of a wasteful extravagance on an internal European flight, I feel, but it was the only place they had space), it cost me £120 and some air miles of which I had tons to spare. Bargainous!

At present I have a BA bronze card (as you can see here), which gives me some sort of priority regarding baggage check-in but does not grant access to airport lounges, which would be nice sometimes if one had to wait a long time for the flight. Talking about nice, the fact that I didn’t have the requisite card was made abundantly clear at Nice Airport (this was a different occasion) the other week when my wife, who has a silver card, could get into the lounge with my son – it’s one guest per card holder – but even though the place was pretty much empty they wouldn’t allow all three of us in.

I think I’m inching towards silver, although I know that gold will be forever out of reach…