FLYING: All up in the air (or not!) with Ryanair

I flew back into Stansted from Spain last Thursday. The flight was about 90 minutes late getting in. When your flight is scheduled to land at 11 in the morning and it gets delayed by that long, that is frustrating. When it’s due to land at 11 at night and that happens, that is shocking. For starters, the Stansted Express into Liverpool Street had stopped running by then. Overall, not a happy flying experience. I might add that I was flying with Ryanair.

This has not been a good month for Ryanair and its controversy-keen chief executive, Michael O’Leary. Last week the airline, which is Europe’s busiest, announced the cancellation of 18,000 flights between November and the end of March. It is estimated this will affect over 400,000 passengers, this being in addition to the 315,000 who have already been massively inconvenienced by the cancellation of a slew of flights in September and October, caused by the airline mismanaging pilot rosters because it screwed up their holiday arrangements. Also last week the company was warned by the Civil Aviation Authority that it faced legal action for misleading its unfortunate ex-passengers about their rights, specifically failing to tell them they were eligible to travel on a different airline for free and also recover hotel and other expenses incurred as a consequence of Ryanair’s cock-up. Who would have thought they would stoop so low? 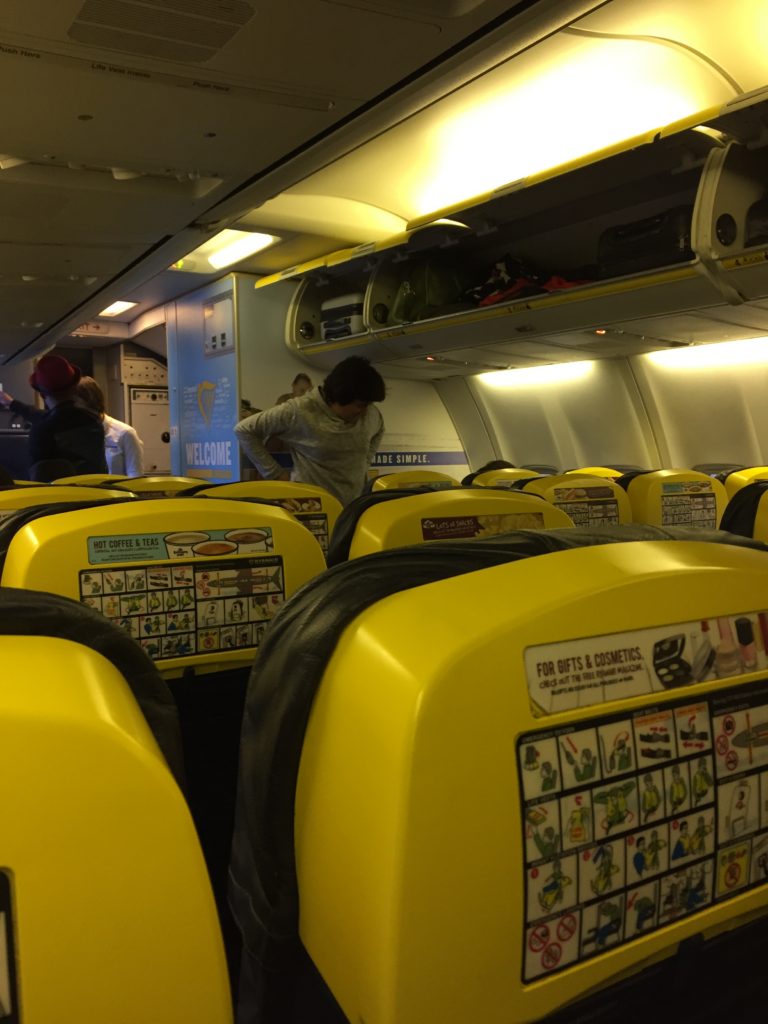 A familiar sight if you’ve ever flown on Ryanair: that shade of yellow isn’t too good if you get airsickness

Ryanair has a lot of clout. For example, The Times pointed out that the company accounts for 90% of the flights into the Sicilian airport of Trapani. The cutbacks it has announced could apparently cost the local economy there £35 million. But is the commercial power that Ryanair has part of the price we have to pay for a return flight costing only £39 (as mine did)? The company was in the vanguard of the modern-day ‘unbundling’ of the elements which go into buying an airline ticket. Nowadays the prices can be extraordinarily low but then you pay extra for putting baggage in the hold, the baggage allowances are strictly observed (hence you see poor little kids shuffling huge suitcases to check-in) and you pay in order to get a bottle of water on board. Everything has been pared back; is it any wonder that things sometimes go wrong? And when they do, we rage about the fact that they have, as if we’d just bought a Rolls-Royce rather than a clapped-out banger. There’s a sensible old saying: if the price of something looks too good to be true, then it probably is.

In the interests of balance, I should point out that the chief cause of the problems that afflicted my flight was not the identity of the carrier I was on but a computer glitch which occurred around 10.30 in the morning and affected flights throughout Europe for the rest of the day. Not that I knew any of that then. What I did know was that the queue at the UK border at gone 1 o’clock in the morning was huge; it took 25 minutes to get through. Eventually, after another huge queue, I managed to get a taxi into London, although not before having to suffer the fact that the initial section of the M11 was closed for resurfacing (but other than in the middle of the night, when else could they possibly do that?). I got home around 4. International travel, hey! Don’t you just love it?