FLYING: An extraordinary vision of war

OK, admittedly this isn’t about any flight I have taken – I’m damned sure a Sopwith Camel would be way beyond me: I’m not a pilot and those planes don’t do passengers – but at the Estorick Collection in North London there is a wonderful little exhibition about which flying is absolutely at the heart.

Mention the First World War and, like it or not (probably not), the images that will probably spring to mind will be of muddy trenches in the Somme rather than the spectacular skylines of the Dolomites. Yet that is what is illustrated here, quite vividly so in the works of Sydney Carline. He was an artist who had been taught at the Slade School of Art before becoming a pilot in what, from a British historical perspective, is not so much a forgotten war as an unknown one.

In this conflict, Britain was intervening on the side of Italy. (I know; confusing, isn’t it?) On this particular front, Italy was trying to resist an invasion by the combined forces of Austria-Hungarian and German troops (I know; confusing, isn’t it?) and it was feared that defeat for the Italians would free up large numbers of their adversaries to wage war elsewhere. Thus it was that Carline and his colleagues took to the air to do battle in a rather more beautiful part of the world than the nondescript killing fields of northern Europe. Between missions, he would sketch what he had seen from his lofty vantage point in the sky and commit the results to oil paint once he had returned to earth. They are quite glorious, as you can see by way of example on the home page as well as below. 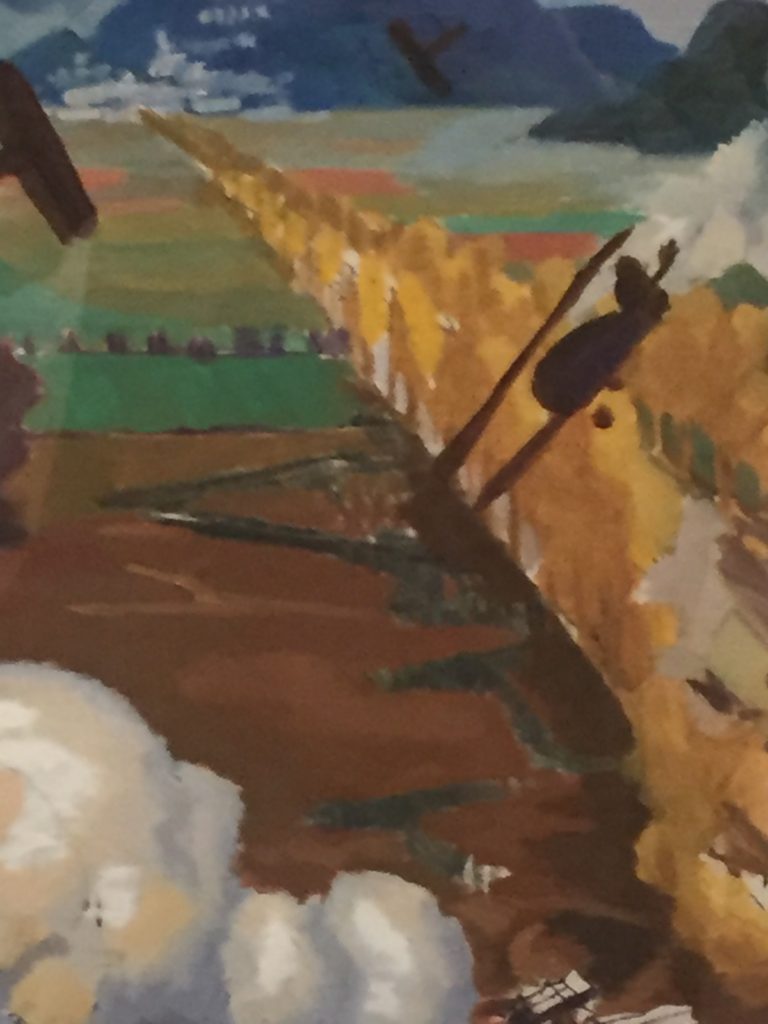 As I hope you might gather from the painting above, Carline brings to life the exhilarating sense of a pilot’s job, his own job, while flying these dangerous missions in his Camel, a plane so difficult to handle that apparently more than 350 trainee pilots were killed in them in 1917 alone. And Carline was doing this while figuring out how he might show what he’d seen once he’d got back to base! Paintings from the air are a comparative rarity in art, which is no surprise, and what Carline achieved in both depicting the frightening drama of aerial battle and the geographical sense of valleys and mountains is tremendous, an achievement all the more remarkable for being an incidental adjunct to his own bravery.

In another room are black and white pictures from the same region, albeit on the ground, taken by two official war photographers, William Brunell and Ernest Brooks, which evocatively depict the everyday connection between the British squaddies and local womenfolk, whose men were away in  battle elsewhere. They, too, tell a fascinating story and are well worth a visit but for obvious reasons they don’t make for such vivid illustrations here as does Carline’s work.

War in the Sunshine: The British in Italy 1917-18 is at the Estorick Collection, London N1, until March 19.

73 thoughts on “FLYING: An extraordinary vision of war”