When one goes abroad it is always helpful to have the words translated into English. Indeed, sometimes you’d be lost without that assistance. On other occasions it is not that big a deal; a smattering of the lingo often enables one to at least get by in, say, France, Italy and Spain. But on a recent trip to Greece I was reminded how essential a translation service is. As the sign in the airport car park makes abundantly clear on the home page, in Greece one is not only trying to deal with a foreign language. We’re talking (I say that bit metaphorically, of course) a completely different alphabet – all the way from alpha to omega!

Yes, this was beyond Double Dutch. It was indeed all Greek to me. Although the officials at Athens Airport were most obliging. They let me join my friend in the club lounge for his flight home, even though this meant I would have first to go through security to go with him there and later undertake the same rigmarole to get to my plane, which would be leaving from a different bank of departure gates. To complete the final part of the manoeuvre, I had to go down to the baggage carousel in arrivals before entering the correct departure terminal. I have to confess that the underground switch felt weird, like I was doing something furtive even though I had been given specific instructions to do just that. 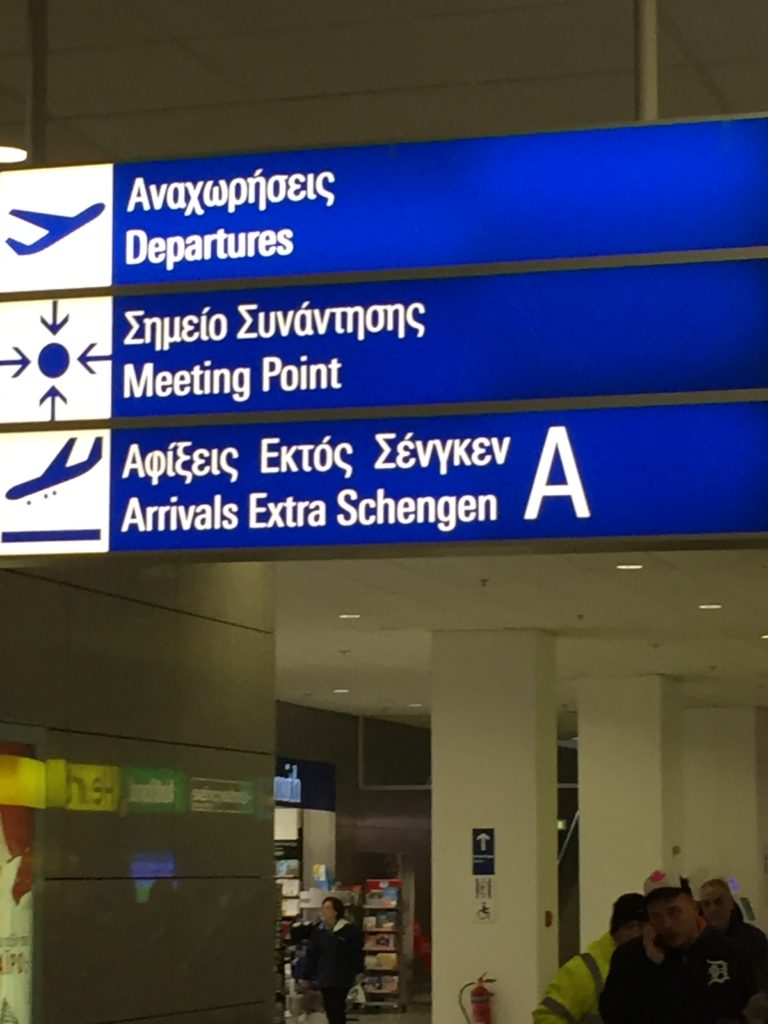 The whole reason for this palaver was that I was taking a flight to London while my friend was going to Zurich. Greece is one of 22 of the 28 European Union countries to be in the Schengen Area, as referenced on the sign you see above. (While not in the EU, Switzerland is in the Schengen Area.) This zone comprises countries which have officially abolished passport and other types of border control. Four of the EU nations outside the area are Bulgaria, Croatia, Cyprus and Romania, all of which will be obliged to join in due course. The UK and Ireland were both granted permission to opt out.

On March 29, as matters stand, we’ll be opting out of the EU altogether. If one can feel nostalgic about something before it’s even happened, that had been my sentiment on arrival in Athens as I followed the signs for EU passport holders, being aware that my time as one of those is likely to be almost up.