Air travel has never been more normal, more routine. It causes controversy, of course, such as whether Harry & Meghan are using too many private flights for a couple so earnestly bleating about the effects of aviation on the climate and the environment. This is especially the case when they lie about it. The other day Harry solemnly declared that “99% of the flights I catch are commercial”. Then someone came up with information that proved 50% would be more like it. I guess in the world we’re all in it should come as only the mildest of surprises that the queen’s second grandson is Trumpian in his attitude to the truth.

Being honest here myself, I think I’d fly by private jet all the time if I could afford it. Smaller airports would be one plus. A much bigger deal would be that there’d be no need to suffer those wretched lengthy queues to go through security, having thrown away all the liquids you intended to take but forgot you couldn’t carry on. It would have been so much nicer if Harry had ‘fessed up. 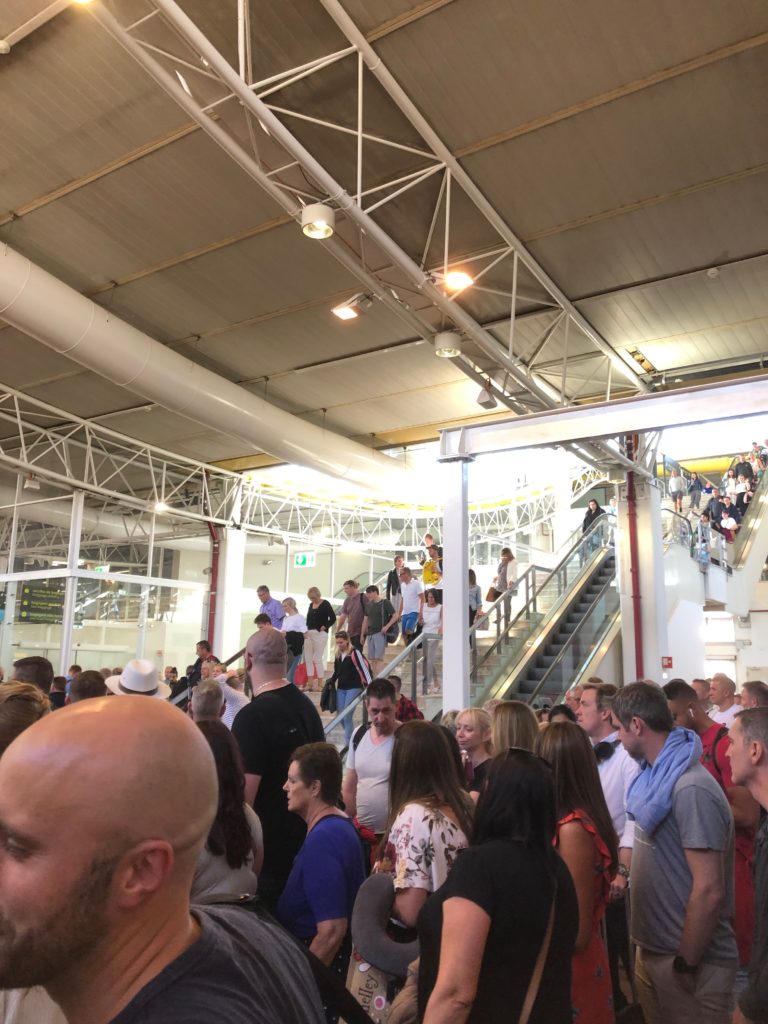 Arriving passengers descend into the baggage reclaim area at Faro, joining those already milling around

But I guess it would not solve everything. You’d still need to get into the airport and/or get out, which is apparently particularly grim news if you live in Los Angeles. Fodor’s Travel, the long-trusted American bible on the subject, recently declared that LA had the worst airport in the world. Noting that access is probably the second most important facet of an airport after security, the guide wrote: “Thanks to the improbably stupid design of its catastrophic horseshoe motor-loop, it regularly requires 30 minutes to travel the short mile from the outskirts of the airport to most of its terminals. And because Los Angeles was built as a city beholden to the automobile, there its no other way to arrive or depart from this maddening complex of suffering but through this interminable traffic.” (I thought things were bad enough at Atlanta and Orlando, for example, when after eventually collecting your luggage from the carousel you have to put it on another one and reclaim it again after you’ve exited customs.) The situation at LAX is so awful that a $14 billion renovation project is underway. While that’s going on, of course, the traffic is even worse!

Airport hell is not only an American phenomenon. For example, take Faro Airport in the Algarve. The upgrade here has been completed. The improvements mean that what used to be a ho-hum five-minute experience of getting through passport control has been extended into a good half-hour as the queues weave their way around and about, the numbers of recently disembarked passengers becoming increasingly narked as more people arrive from a staircase to add to those who entered on the ground floor. On the other hand, it means the odds are good that your luggage will be ready and waiting for picking up once you eventually emerge into the reclaim area.

BTW, the home page shows a British Airways plane, this during a week when BA pilots have voted to stay at home rather than take to the skies. Looks like Harry has got another good excuse for preferring private…