FLYING: High jinks and (not) putting on the Ritz

Robert Louis Stevenson famously opined that “to travel hopefully is a better thing than to arrive”. The emphasis of the sentiment, of course, is that often the anticipation is preferable to the reality. And that’s a fair point. But what about to travel hopelessly?

The other week I caught a flight for which take-off was delayed by two hours. It was only one hour late arriving at its destination. (Which was the correct one, in case you’re wondering.) I guess that’s what they all do: have a timetable that suggests the flight duration will be, say, five hours when they know it should be four. You’re late taking off but you arrive on schedule and they then congratulate themselves over the tannoy for “having made up the time”.

It’s a bit like the safety procedure. We all know it has to be done and it should be done and occasionally it needs to be heeded (you know, the “in the unlikely event…”stuff) but are we really supposed to think that assuming the brace position is going to save us in the event of the worst occurring? I guess it might help with dental indentification, though. And, indeed, nor are those passengers who drink gin and tonics on an industrial scale going to help anyone much if things go awry.

A recent flight I was on was delayed because of a problem with the air conditioning. A stewardess informed us that if the problem didn’t get resolved, we’d have to change planes. Perfect: a night at an airport hotel. Travel doesn’t get much better than that. More optimistically, the pilot then announced: “If we can’t get the problem fixed then we might seek permission from air-traffic control to fly an alternative route.” What did that mean? That we’d fly all the way from the UK to the Caribbean only over warm places? Or only over cold ones? Or maybe just fly very low? 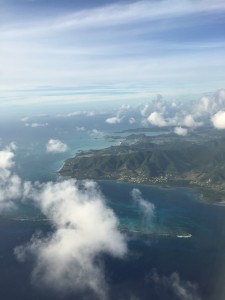 Another thing. I don’t know if you’ve ever flown British Airways but what is it with those scones with the raspberry jam and clotted Cornish cream they serve for afternoon tea? I think since time immemorial. It seems they’ve been around for so long that I wonder if the Wright Brothers ate them for mid-flight sustenance? Mind you, the longest of their first-day flights lasted under a minute, so eating was hardly a requirement. On the other hand, it was in 1903, and some of those scones do look of a certain age.