FLYING: Kewing for take-off and landing

Kew Gardens is a gorgeous place to visit, as I referred to when writing about the restoration of the huge Temperate House there in a recent blog. There is much more than that to see, though: there’s the Palm House, where the trees do go all the way to the top, and a greenhouse containing a glorious pond of lilies – Monet would surely have considered that to be something to die for if he wasn’t already dead – and a general sense of wellbeing is created by being among so many spectacular examples of majestic trees and colourful plant life. As the BBC emphasized on its many programmes about the Chelsea Flower Show, which concluded last Saturday, being amid and surrounded by nature has been medically verified to be of help in combating mental illness. If you’re feeling down, a trip to this part of southwest London would provide an excellent tonic.

There is one downside, however. Aircraft. I don’t think I’ve ever been when the gardens are not either on the flight path into Heathrow or one out of it. Kew is a pleasant residential London suburb and I guess the property prices are comparatively reasonable for the capital, a consequence of the almost endless sound of jet engines. 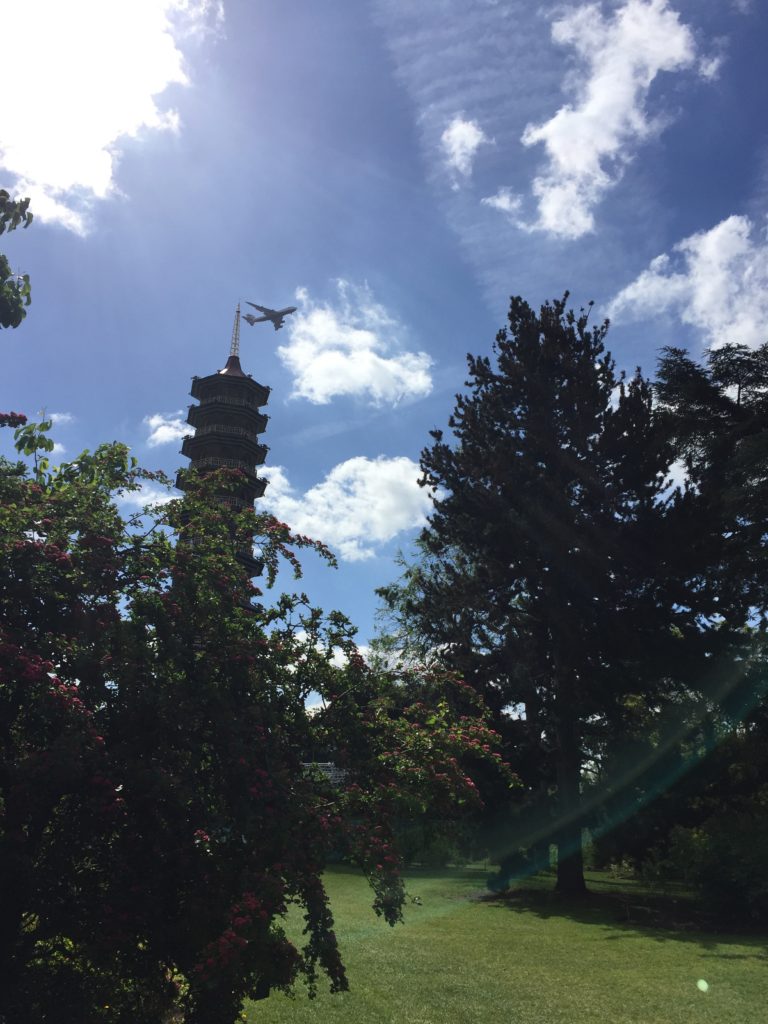 Out of a (pretty much) clear blue sky: a plane flies over the Kew Gardens’ pagoda en route into Heathrow

As well as the noise it can be a dangerous business lurking around Kew. In February a block of ice weighing an estimated 20 kilograms fell out of the sky and landed in a street there. The authorities suspect it fell from a low-flying plane heading into Heathrow (who on earth is an authority on such a subject?) and for sure someone would have been killed if they had been on the receiving end of that. “It was like the start of a disaster movie,” a man who saw it land told the Evening Standard. It might all be enough to drive a man to drink, which reminds me about the photo on the home page….

55 thoughts on “FLYING: Kewing for take-off and landing”