FLYING: London City Airport – on a wing and a prayer

The other day I caught an early flight from London City Airport. Very early. Or at least I thought it was very early. On the other hand, there were two flights scheduled for Ibiza before mine left. How do those clubbers do it? It surely can’t only be the Red Bull. Mind you, I’m not saying it was the same crowd but there were a couple of groups of guys who had evidently decided that beer o’clock fell at 6.15.

If you live to the north or east of London, City is a great airport to get to, combining the accessibility elements of both Luton and Stansted in one place without the inconvenience of having to travel to either. (Let’s not even think about Gatwick.) Everything about the airport is agreeably small: the check-in area (as shown on the home page) is smart and modern, the shopping area is handily compact, and then there are the planes. The latter is chiefly the case because the airport only has a single 1,500-metre long runway, which limits the range of planes that can use it – “only multi-engine, fixed-wing aircraft with special aircraft and aircrew certification”, it says here. And smaller planes means they get loaded with the luggage quicker, which means you are more likely to take off on time. In theory at least. 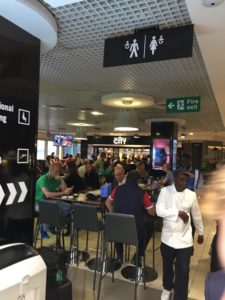 The airport is located in the Royal Docks in Newham, about seven miles from the Bank of England and considerably closer than that to Canary Wharf and those other edifices which have have Manhattanised a huge area of East London. Given that the aforementioned are the two major centres of finance in Britain it is no surprise there is a considerable amount of business traffic through the airport, hence flights to such as Zurich as well as to Venice. In 2015 the airport served nearly 4.5 million passengers, an 18% increase on 2014. It has limited schedules on Saturdays and Sundays.

Of course, the City of London and Canary Wharf are also currently two of the majors centres of finance in Europe, though it remains it be seen what the Brexit effect will be on that. As for exiting the airport – I mean aboard your flight – that can be a bit steep. One moment you’re trundling along the runway, the next you’re up with those skyscrapers. Just put your trust in the pilot and enjoy the view.

57 thoughts on “FLYING: London City Airport – on a wing and a prayer”