FLYING: Not so nice at Nice any longer

Everybody knows that bigger isn’t always better and I think airports are often a good example of that. Things change but it assuredly ain’t necessarily progress. For example, depending on which side of the argument you’re on, Heathrow is already way too big or it’s not sufficiently humungous to do the job it should be doing. It’s rather like many of the ‘debating’ points regarding the EU referendum: you take one contentious circumstance – say perhaps national security – and, again depending on which side you’re on, we’d be better off if we stayed in and/or we’d be better off if we came out.

Anyhow, back to the tarmac. In the (g)olden days – let’s say around 15 years ago – flying into Nice Airport (shown on the home page) in the South of France and hiring a car was a comparative pleasure. You collected your baggage, hopefully, walked out of the terminal and the hire-car facility was just across the road; literally, one minute’s walk away. If you’d known in advance which vehicle you’d been allocated, you likely would have been able to see it before you left the airport building. But tempus fugit (pun intended) and all that, look at the situation today. Your car is now a bus ride away.

OK, so it’s a free shuttle bus, but the bus is not so roomy when there’s a ton of people trying to do the same as you…and, oh yes, this being a total shocker, several of them have luggage. Often a lot of luggage. It’s an airport, after all. All those suitcases could turn you into a head case. (In latter years when we have been there as a family, I get the car while Jane and our sons collect the bags. I then meet them in the car park, the very place where the hire cars used to be. Simples.) 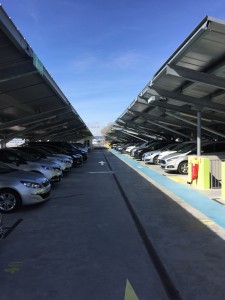 OK, it’s bigger, but is the car-hire facility at Nice Airport essentially any better?

I am aware that this is not a phenomenon that only applies to Nice. I am also aware that its airport has got considerably larger and there isn’t enough room close to the terminal in which to hold all the cars that are going to be picked up. Be that as it may…

…I ought to point out that this mild rant is based on the assumption that you’re landing at Terminal 1 and not Terminal 2, the former being the more probable scenario for international flights but in any case you wouldn’t be able to see your car from Terminal 2 because it will now be somewhere in a multi-storey car park. But whatever else has happened, at least Nice hasn’t yet gone the route of Atlanta Airport, for example, where you have to get your baggage off the reclaim belt and then put it on another one before later collecting it from a different one elsewhere in the terminal – this fun and games coming immediately after a transatlantic flight. And at least at Nice, getting through passport control is pretty quick these days. That may change depending what happens on June 23.

93 thoughts on “FLYING: Not so nice at Nice any longer”