FLYING: Ready for take-off in some style – and at quite some expense

Bilbao Airport, just inland from the Basque capital city and located at Sondica, used to be, frankly, an ugly place. But, hey, it’s an airport. Unless you’re a Tom Hanks character lost in some movie, you’re only passing through. Its replacement, on the other hand, is eye-catching rather than an eyesore. As you can see from the photo on the home page, the visual aspect of the building from the airfield is indeed evocative of flight.

The new terminal was opened in 2000. It was designed by the celebrated and controversial 64-year-old Spanish/Swiss architect, Santiago Calatrava. Reportedly at one point he complained that the signage detracted from the aesthetic appeal of his work, although in the end he did acquiesce and accept that it’s pretty important that an airport is functional as well as elegant. It would be scant consolation if you missed your flight to be told not to worry because the place was up for several architectural awards.

There was more. The Spanish Airport Authority decided that the original design didn’t provide enough space in departures for suitable shopping amenities. That was altered. Oh, the landing experience wasn’t perfect either; there was no arrivals area. Once you’d cleared customs, you stepped straight outside into the elements, and rain is not unknown in these parts. That also got dealt with. 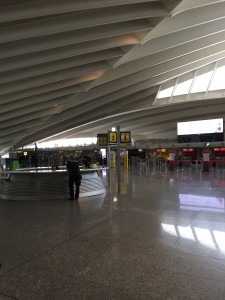 There is a website called ‘The Full Calatrava’ which purports to “objectively inform of failures and overspending” on Calatrava’s projects. The list is scarily long. It suggests that the cost of correcting his own errors at Sondica amounted to €29 million, which would sound a heck of a lot of money if the site didn’t also claim that the overspend on the World Trade Center Transportation Hub in New York was €2 billion over the top. Calatrava’s apparent reputation in this regard reminded me of an old quote to do with a different kind of architecture, the designing of golf courses. Hall Thompson, the owner of Shoal Creek in Alabama, hired Jack Nicklaus to create the course he wanted. He said later: “I gave Jack an unlimited budget and he exceeded it.”

From a personal perspective, I don’t think of this particular white building as being a white elephant, although I’d perhaps feel differently if it was my budget at stake. And, of course, I’m only ever passing through.

59 thoughts on “FLYING: Ready for take-off in some style – and at quite some expense”