FLYING: Taking a trip with TAP (and other airline acronyms)

My latest flight was to Lisbon, the Portuguese capital and veritably a fabulous city. It was a notable flight: it may have been the first one I’ve caught that took off 15 minutes after it said it would yet landed 20 minutes before it said it would. And flying to Portugal is not downwind. Clearly they’d built an over-generous amount of compensation into the timetable, which isn’t something you mind about when it works in your favour. (Of course, arriving above the airport earlier than scheduled meant some time spent circling, waiting for permission to land.)

I flew TAP Portugal, the national carrier. There’s probably a nifty acronym for it but not one that comes to my mind. Not like one of the classics: TWA – Try Walking Across; Sabena – Such A Bloody Experience, Never Again; and Alitalia – Always Late in Takeoff Always Late in Arrival or, alternatively, All Landing in Tokyo All Luggage in Athens. The flight was as smooth as one could hope, although it wasn’t a journey endowed with great views, to be fair mostly because it was cloudy most of the way. I remember years ago flying to Milan and when the cabin crew came round with the food, my wife apparently explained my absence by saying: “He’s gone off to get the good view of the Matterhorn that the captain mentioned.” Another time, flying to Nice, it was possible to enjoy the marvellous sight of the weird moonscape that is the summit of Mount Ventoux.

Anyhow, on this particular journey, on arriving in Lisbon Airport and having collected the luggage, which thankfully wasn’t in Athens, we found there were only red and green channels (no blue) in the customs hall. And getting out was a total bottleneck, to the extent it might have made one want to neck that bottle of duty-free spirit. 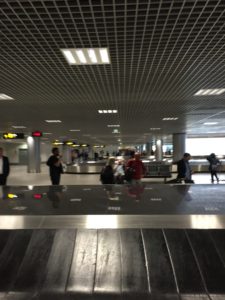 The baggage reclaim area at Lisbon Airport, in the nice shiny new part

Basically, the airport is a work in progress, construction upon construction, with no danger of not recognising which is the new bit and which is the old. And once you’re out, having survived the crush of those two channels, what would you imagine is the first thing you see in the arrivals area? Of course – a Starbucks coffee shop. Exactly the same as in Dubai, and probably many other international airports. You don’t have to catch a flight to the USA to feel that you’re being greeted with a message that implies ‘Welcome to America!’ Even if you’re on the opposite side of the Atlantic.

54 thoughts on “FLYING: Taking a trip with TAP (and other airline acronyms)”