We are approaching a full year (the anniversary will be on March 23) since the first government lockdown was ordered on account of the coronavirus. On July 4 the restrictions were lifted and pubs and restaurants could reopen. Many people went on foreign holidays, trying to make the most of a belated summer break. One thing I’m sure most of us thought was that we would not be in a worse situation this year but, even with the roll-out of a major vaccine campaign now underway, it seems that we are indeed in a worse place. The view that’s shown the home page, of planes on the tarmac at an airport, is perhaps not one many of us will be familiar with any time in 2021. Boris Johnson said yesterday: “I don’t want to give away too much by way of summer holidays. I am optimistic but things have got to go right.”

There will be more of the sort of thing in newspaper headlines as shown below in the coming weeks and months. As it is, quarantine is finally being enforced with some vigour for people flying into the UK and people are being encouraged (some would say ordered) to stay at home: in one’s own property to protect against covid and in this country to avoid travel altogether. Priti Patel, the home secretary, said last week that “leaving the country without good reason is to become illegal”. Going on holiday would not constitute a good reason. She particularly criticised the social-media influencers for “showing off in sunny parts of the world”. I guess it’s not fun being locked up in the UK and seeing photographs of other Brits sunbathing abroad. She said travellers would be required to fill out a declaration form explaining why they want to fly. I am sure this is not a process that the airlines will be keen to have their staff involved with checking. 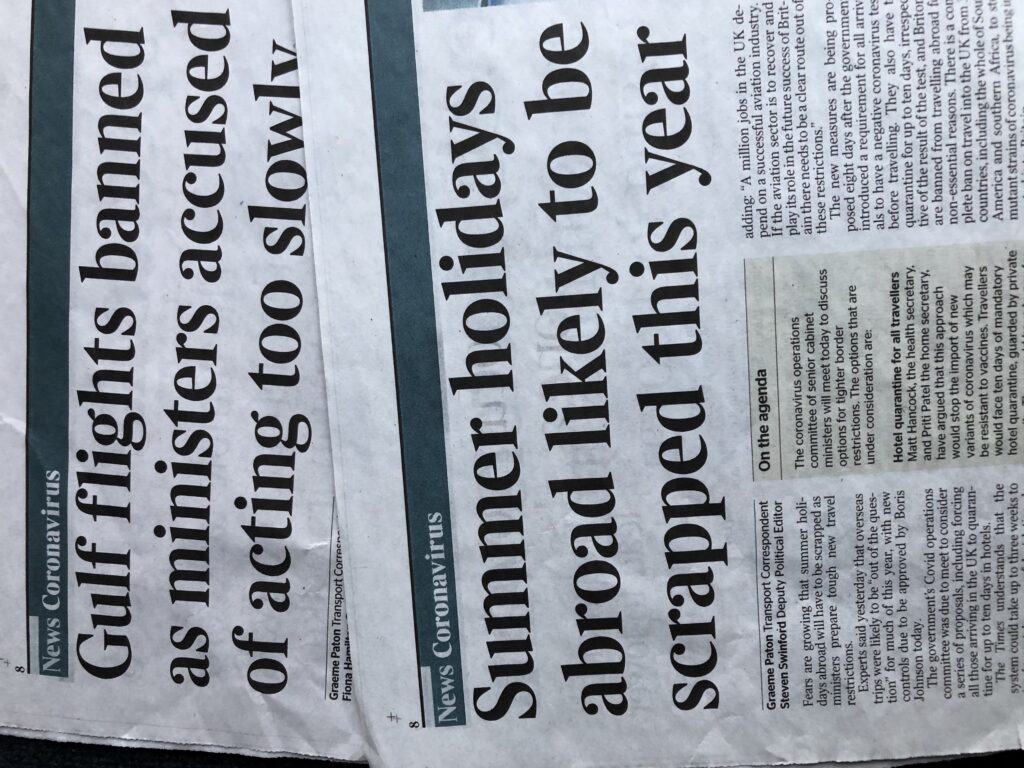 Two recent stories from The Times: lousy news for the public and even worse for the aviation industry

Is this really how things are going to pan out? Julian Bray, an aviation consultant, thinks it is. He told The Times: “It’s pretty obvious ‘regular’ summer holiday traffic is out of the question. The destinations that people want to visit are all going through the same thing we’re facing. It is not the case that the UK’s closing its borders and everywhere else is fine.” Indeed it isn’t. And as we have become increasingly aware over recent days, a lot of the everywhere elses are less well placed than we are as regards getting immunised.

Which will surely have an effect on where we can fly to and when we can do it. If every adult in the UK who wants one has had at least their first dose of vaccine by, say, the end of July, but in Spain only 30% of people have, will the authorities in that country (and others) be willing to allow Brits to fly in and maybe put in jeopardy the health of their own citizens? As things stand, there is no set-up that provides for ready proof that someone has had a jab. Oh well, as D.Ream (and Tony Blair) liked to say: ‘Things Can Only Get Better’.