FOOD: A part of Paris in the heart of London

I don’t know how many times I’ve eaten at L’Artiste Muscle but every time my feeling is that it was too long ago. If one were compiling a list of restaurants that might be up for a Michelin star – and 19 restaurants in the UK, eight of them in London, gained one of those accolades this year – then this place would be nowhere near it. This is not fine-dining. This is fun eating. It’s the Left Bank right here.

The restaurant is in Shepherd Market, London w1, the heart of Mayfair and a location that is quite widely recalled for the encounter in 1987 between Jeffrey Archer, best-selling author and then a Conservative MP, and Monica Coghlan, a “lady of the night”. (Or, if you prefer, a sex worker before that term had been invented.) Archer won a libel case against the Daily Star over its allegations that he had had sex with her – the judge suggesting that why would he when he had such “fragrant” wife at home? – only for him to be jailed later when it was established that he had committed perjury at the original trial which had, of course, occurred at his instigation. From fragrant to flagrant, one might say.

I don’t know that ‘fragrant’ is the right word to describe the glorious aromas that invariably emanate from the kitchen at L’Artiste Muscle, only a few feet from where you’re sitting if that’s at an upstairs table (which you can get a sense of from the photo on the home page), but they certainly encourage an appetite. As does the menu: snails in garlic butter, moules au beurre maitre d’hotel, boeuf bourguignon, steak frites, a casserole of white beans, duck and sausage, tarte tatin. For example. If the weather is good, you might try enjoying your meal at one of the outside tables. The restaurant is on the corner of a small square and traffic is only a minor irritant at worst. 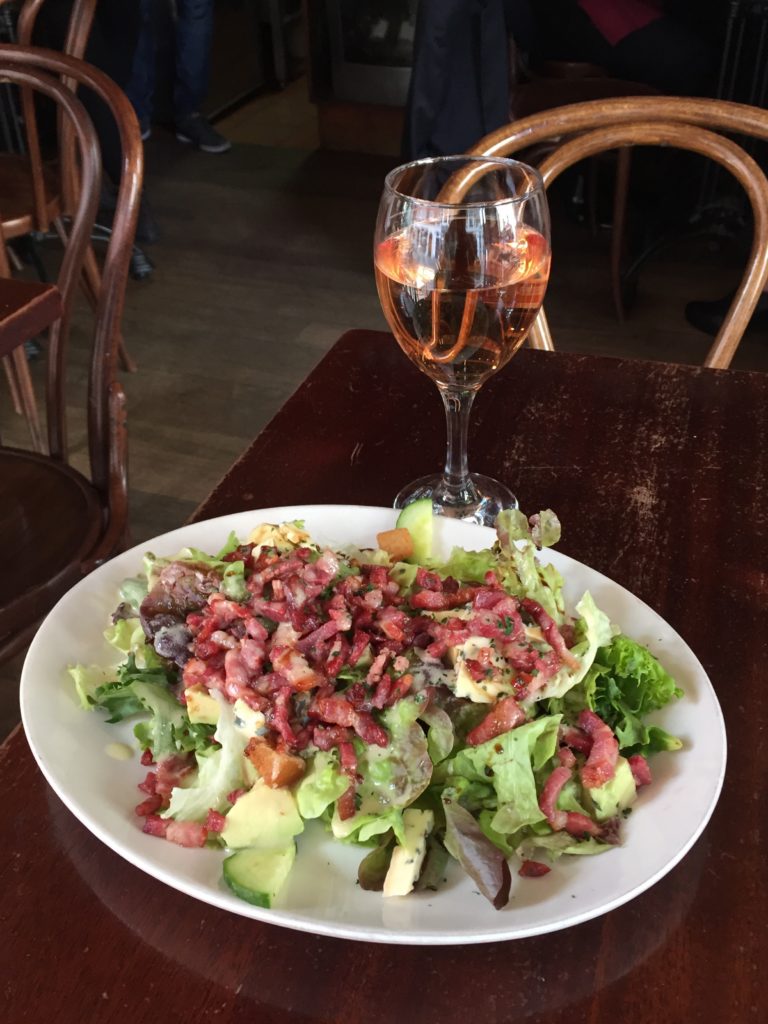 Obviously there are no pre-prandial smells to greet the arrival of a salad but, despite the foregoing recommendations, the large version  of Salade de l’Artiste is my usual go-to dish when I’m here. It comprises blue cheese, croutons, lardons, avocado and two halves of tomato. It is spectacular. With a glass – OK, perhaps two – of rosé, it makes for the perfect summer lunch.

In what is hardly a posh eating environment, the major incongruity is the mix of clientele. Some tourists, some locals, all casually dressed, and then the gents in suits and braces. This is hedge-fund territory, and it’s quite amazing how much red wine they seem to get through in an hour. But it all adds to the atmosphere. I mean, how French can one be? This is like being in a part of France that belongs in London as surely does Thierry Henry. And I think we can all say Va Va Voom! to that.

93 thoughts on “FOOD: A part of Paris in the heart of London”