FOOD: A room with a view

As you can see from the photo on the home page, you get a tremendous view over London from the 10th-floor restaurant at the Bourne & Hollingsworth Garden Room in Charing Cross Road, WC2. Situated atop the Assembly Hotel, close to the National Portrait Gallery, if the conversation dries up at least there’s a spectacular outlook to enjoy. The floor-to-ceiling windows guarantee every customer an iconic sight of one sort or other – the London Eye, the Shard, Nelson’s Column, Canary Wharf and more. Take your pick. One of the problems with this panorama is that it makes it difficult to concentrate on the menu. I think we said “just give us two more minutes” about five times before we actually got around to ordering.

And, of course, the main reason for being here is to enjoy lunch or dinner. On a previous occasion I had chosen the bavette steak and fries (a customary go-to sort of choice for me) which was perfect. But I couldn’t have that again. Or could I? No, not even I would do that. Instead, after a very fine beef carpaccio with horseradish, I went for the parmesan chicken schnitzel served with an autumn slaw. My friend, pleading the excuse of having a dinner engagement as well, skipped the starters completely and chose a dish of roast cauliflower, red pepper, buckwheat, pistachio, pomegranate, mint and spiced coconut yoghurt. Granted, since this was a little over a fortnight ago, we were eating in the month which for some people became styled as ‘Veganuary’, though to her credit she didn’t use that as an excuse. 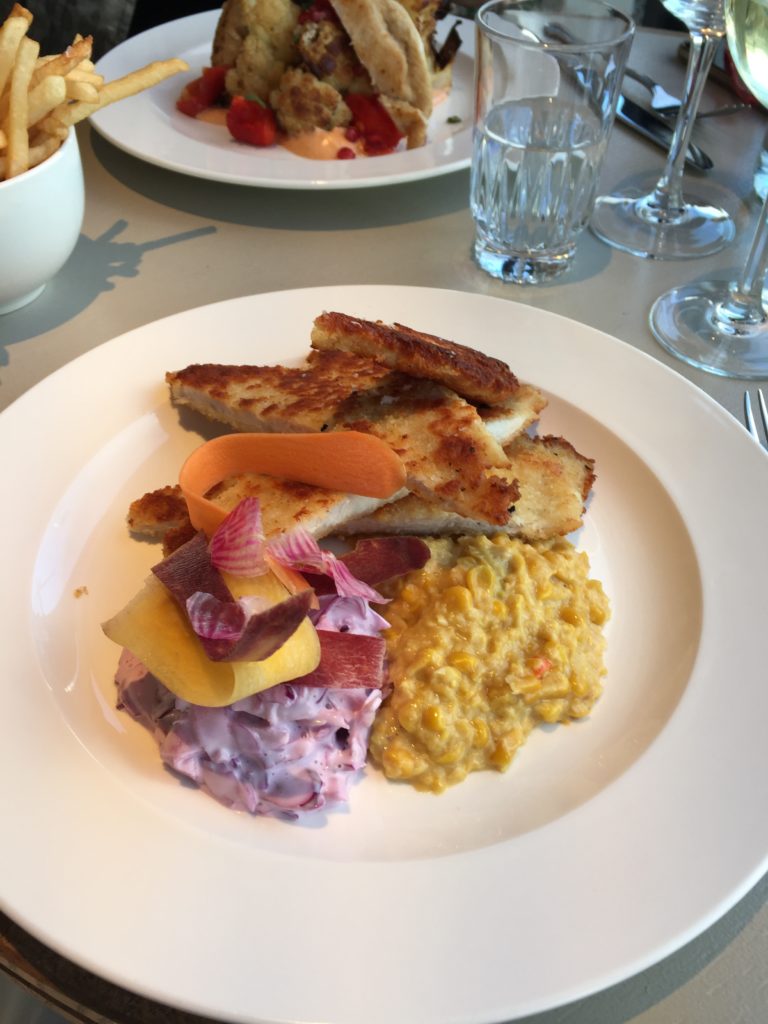 The chicken schnitzel was hugely enjoyable…and featured a pretty huge plate of food; too much for me

On the dessert list, the spiced plum crumble with custard and the chocolate, orange and amaretti cake both sounded divine but both had to be avoided. In general, three-course lunches are a thing of the past for me. So are desserts, at least pretty much so. I do have quite a sweet tooth but – and I realise this is a sign of getting older (although I don’t know anyone who is getting younger) – it does become a bit more of a battle to keep one’s weight in check, and cutting out the puddings (and cheese, for that matter) helps in that regard. We all need to eat to live and now and again it’s great to feel one is living to eat. I just do that with less sugar involved these days.

The B&H Garden Room has seating for 100 guests. If you want the view but not the food, you could just have a drink at the bar. I grant you that there are undesirable calories in alcohol as well but I’m not ready to jettison the whole lot just yet.