Chiltern Firehouse opened as a restaurant in 2013, just 124 years after it opened as the Marylebone Fire Station. Obviously, in its original form, it was a base from which firemen would help people to get out of flaming buildings. In its newer incarnation, it’s a place you couldn’t flaming well get into. In fact, according to one London journalist a couple of years ago, “there’s even a waiting list for the waiting list”. It was the place to be seen, the successor to Nobu, which itself was the successor to The Ivy, which was…well, you get the picture.

However, you will have gathered that I did get in. (I had been for lunch once before, an occasion on which we could only get a table if we sat outside but, since it turned out to be a lovely June afternoon, that was fine.) In its pomp, the restaurant was not distinguished by its menu so much as by its clientele. It’s in Chiltern Street, London W1, close to Baker Street, and while Sherlock Holmes might have turned up his nose at the absence of opium, I’d be surprised if Benedict Cumberbatch hasn’t been there. Lindsay Lohan practically lived in the place during her stint in London performing in Speed The Plow. And, to be fair, there was no need to speed up the service, which was on the right side of attentive without being oleaginous.

(Speaking of service, I do dislike the way one ridiculous Americanism has begun to sneak into waiter/waitress argot over here: the question “Are you still working on that?”, as if they figure that eating their food is a chore. The sensible reply has to be: “Yes I am. If you could lend me a pneumatic drill and an electric saw, that would be most helpful.”) 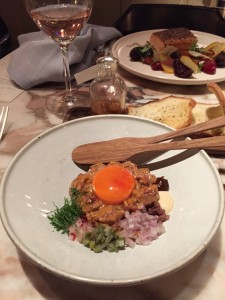 Steak tartare: going to ‘work’ on an egg 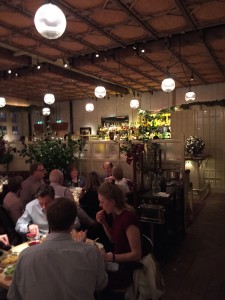 So the cast (sorry, guest list) these days is not so stellar that it precludes my eating inside. And, once there, how was it? Actually, delicious. The menu featured some interesting dishes, such as shrimp and grits with mustard greens and bacon, but I’m not keen on either shrimps or grits so I gave that one a miss. But the tuna cubes with English mustard, anchovy and potato galette made for an excellent starter and our main courses were seared salmon and steak tartare (if you can’t tell which is which then my photography is more suspect than I suspected), the latter coming with Firehouse hot sauce, which was excellent, and an egg yoke, as it should. There were chips as well: evidently out of shot, not yet served or already eaten, I can’t quite remember which.

OK, it has to be said that Chiltern Firehouse is expensive. OK, make that over-priced. If you go, I’d suggest either see if you can do it on expenses or go as someone’s guest. (I failed doubly in this matter.) Or possibly try to put it on Lindsay’s tab?