A crosstown journey, from Spitalfields to Soho – pretty easy by tube, could be an hour in a cab. First stop, pretty close to Liverpool Street station, is  Canto Corvino, (2, Artillery Row, London E1), an Italian eaterie that has got several rave reviews. Quite appropriately: Corvino means ‘raven’ in Italian, and what’s an extra consonant between friends. The room is a delight, especially on a sunny day, as this was. With the large windows open wide, you almost feel you’re eating al fresco even when your table is not one of those closest to the street (see photo on the home page).

There wasn’t any raven on the menu so I started off with a plate of burnt asparagus, Jerusalem artichokes and summer truffles. Typing that just reminded me of how good it was. As for the main course, I had pretty immediately decided on the gnudi ‘Amatriciana’ with blood sausage. I adore many pasta dishes and this sounded perfect. Then the waiter completely flummoxed me by explaining the special: rabbit ragu with wild garlic pappardelle. I guess that might be a good definition of being spoiled for choice. The rabbit won, partly because it might not be there next time, and it was surely the sensible choice. Utterly delicious. I’ll simply have to go back to give the pig a go.

I can say with certainty that the burrata and anchovies on toast looked sensational, as did the black bream ceviche with fennel, olives and oranges. (Especially if you like that kind of thing.) For sure, the cherry ice cream and cantaloupe sorbet tasted marvellous. 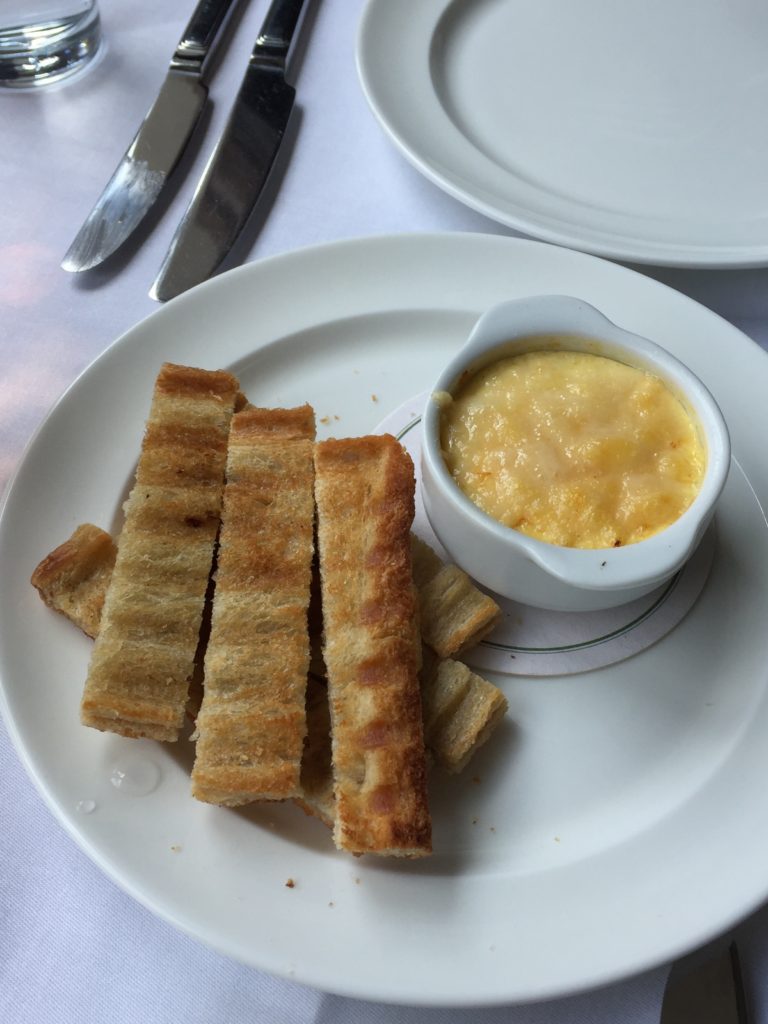 Here’s your starter for 10 out of 10 at Cafe Monico: parmesan custard with anchovy toast – stupendous!

From deep in the city to the centre of the West End. Cafe Monico (39-45 Shaftesbury Avenue, London W1) reads like a misprint, but it’s not. The place has nothing to do with Monte Carlo but is named for its original proprietors. It is on two floors, the upper area granting views of the mingling throngs on the avenue below, one of the hearts of theatre land. (Monico is squished between two such establishments.) Before eating upstairs, the downstairs bar serves a sublime kir – always a good start to a brasserie meal.

In charge of the kitchen is Rowley Leigh, whose celebrated Kensington Place restaurant opened as long ago as 1987. His signature dish is one of the starters, parmesan custard with anchovy toast. There are two strong tastes in play here, and obviously you have to like them both to find the dish to be as divine as I did. The devilled kidneys on toast were perfect and a salad of tuna with white beans and red onions was everything one could hope for. The menu is a classic of this type of dining, moules frites and steak tartare included. (Given my normal inclinations, it shows how alluring the fare on offer was, at least to my eyes, that I got by without ordering the tartare.)

So two places, not for the price of one but to which one should return ASAP.