FOOD: Eating on the dock of the day

Dock Kitchen is a terrific restaurant by Portobello Docks, just off the Grand Union Canal, in London w10, at the top end of Ladbroke Grove; in fact about a 15-minute walk from the tube station of that name. A view of the exterior is shown on the home page and, as you can tell, it was a divine day for an al fresco glass of rosé before lunch. Two, to be truthful. But then it really was time to get inside for the grub. (I enjoy eating outside as much as the next guy – unless that next guy is a gourmand who’s not eaten for 48 hours – but the sun was gloriously bright, which was good, and I had forgotten to bring headwear, which was bad.)

The interior design is by Tom Dixon, whom I gather is a big noise in this department. In charge of the kitchen is Stevie Parle, who made a name for himself at the River Café. The cooking area is open, so you can see your food being prepared, and whatever you’re going to be eating will be preceded by zaatar-flavoured flatbread, which is absolutely fabulous. 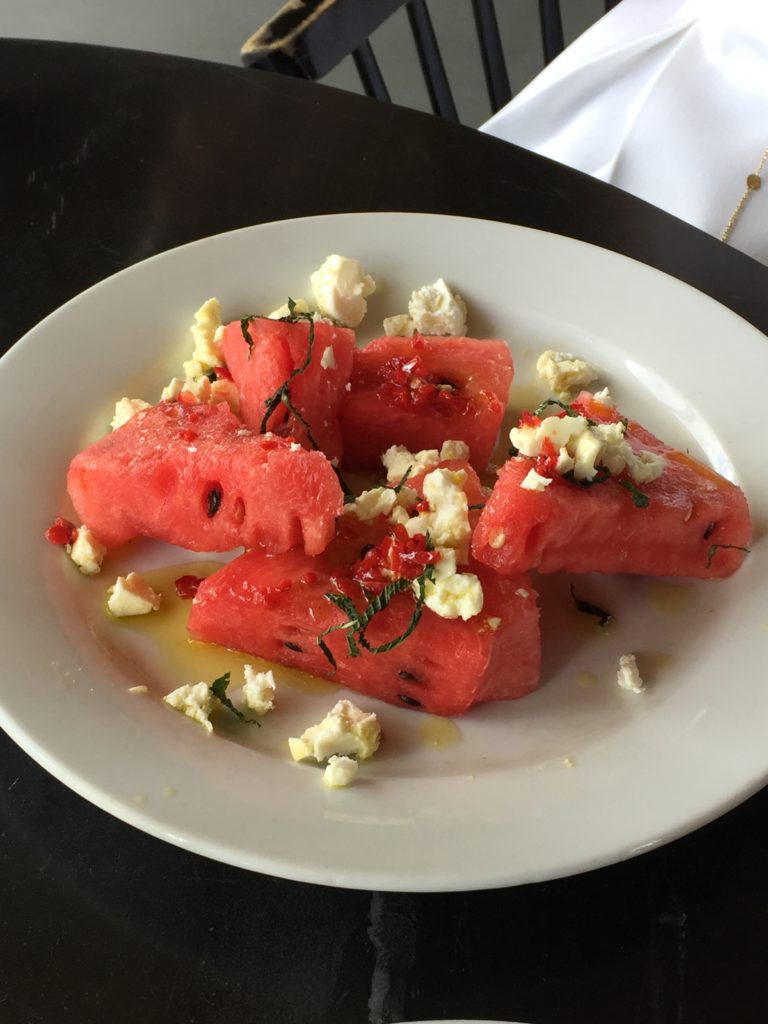 Watermelon, feta, chilli and mint: it sounded good from reading the menu – the reality was even better

It was quite a shock to myself that I didn’t order the steak tartare equivalent (chopped raw beef on toast) as a starter. Instead I opted for the ajo blanco with charentais melon, as one would after having it explained. It’s a delicious almond-based variation on gazpacho, itself a dish I’ve had problems with in the past. I once ordered it in Mallorca and was surprised to get a plate of carpaccio; fortunately I like that as well. Put it down to my crap Spanish. Anyhow, you can see from the photo above that the other melon-themed starter was pretty tremendous, too. For mains, the grilled bavette with slow-cooked courgettes, borlotti beans and anchovy butter was wonderful, and the chicken livers with spices and pomegranate molasses looked likewise. There was never going to be any room for dessert, although that may have been in part because I had insisted on ordering a side dish of shoestring fries. I mean, you can’t eat steak without chips!

There is a shop on a level below the restaurant, and if walking down seems like too much of an effort, you could always take the lift. I didn’t notice if it’s an Otis. (haha)

56 thoughts on “FOOD: Eating on the dock of the day”