FOOD: Getting the chemistry right – from Vauxhall to (Little) Venice

It is almost 20 years since Pharmacy restaurant opened on Notting Hill Gate. It was cooler than a freezer-fresh martini; the brainchild of Damien Hirst, a celebrated artist, and Matthew Freud, a celebrated (sad, I know) PR guy. And the cuisine? Who cared – this wasn’t about the food. It was about the limelight.

It was also about providing a vehicle for Hirst’s singular artwork, but eventually the financial burden of being a gallery masquerading as an eaterie became too much and the place closed down. Hirst sold the art for a fortune at Sotheby’s. A decade later and he’s back with Pharmacy2, located in a large exhibition room in Vauxhall, which might not have quite the cachet of Notting Hill or Holland Park but then Clerkenwell and King’s Cross didn’t used to be what they are today. Give it time.

Hirst has this time granted his restaurant a restaurateur, Mark Hix. The interior is pharmacy-themed, with medical instruments, pill wallpaper and innumerable boxes of tablets. It may well be that other than a professional chemist no one except Keith Richards, who rather fancied himself as a human laboratory, has seen so many drugs in one room – albeit I suspect these are actually only the packaging, and inside they’re emptier than a politician’s promise. 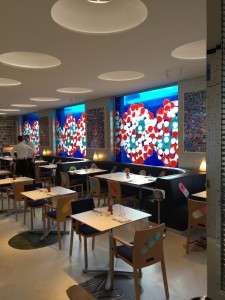 The windows are not only pretty, they hide the view of trains going out of Waterloo 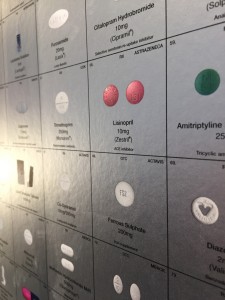 Unlike the food, which was gratifyingly filling. First up I had brik a l’oeuf canard with rose harissa, an envelope of soft pastry with an egg inside and magrebi sauce on the side. Utterly delicious. There were options to move on from North Africa to elsewhere abroad but I was stymied, as so often, by my recurring inability to see beyond the steak tartare. No, not even for the Heaven and Earth, apparently a German-style black pudding. But some days you can’t beat steak tartare, which was delicious and accompanied by a richly yoked egg – which of course can be beaten!

We’ll see how the property prices develop in Vauxhall but northwest across London a lot has been going on. Sheldon Square is an impressive office/residential project at the back of Paddington Station. That doesn’t sound such a great locale but it improves once you realise you’re only a gondolier’s shout from Little Venice. There can be few more pleasant spots in London to enjoy a cup of tea or coffee with a sandwich than aboard the Waterside Cafe (shown on the home page). Agreed, the view is not the Grand Canal, but it’s still very beautiful.

In Sheldon Square itself there are camper vans serving all sorts of street food – Mexican, Indian, Thai – while if the weather’s not so good there is Smith’s Bar & Grill. I might have gone for the confit duck leg even if steak tartare had been on offer, which it wasn’t, but I wasn’t complaining.

Oh, and finally…last November I wrote about ‘Joe Allen and the missing salad’. I’m glad to see it has been found, I gather without police assistance. La Scala Salad has been returned to the JA menu in Covent Garden. I think it should have a court order slapped on it to make sure it doesn’t abscond again.

76 thoughts on “FOOD: Getting the chemistry right – from Vauxhall to (Little) Venice”