I recently went for lunch to Joe Allen in Covent Garden. It was the first time I had been in ages, albeit maybe the 100th time in all. We go back a long way, Joe and I. The eponymous owner, whose original premises are in New York City, opened his place in Exeter Street WC2 in January 1977, the very month I moved to London.

So, yes, there have been many visits and very many enjoyable meals. The brick-walled, semi-basement dining room is alluring as it has always been, and the food – which is essentially a host of American-style favourites (or should I write favorites there?) – is invariably excellent. So where’s the beef? My beef is where’s the salad? 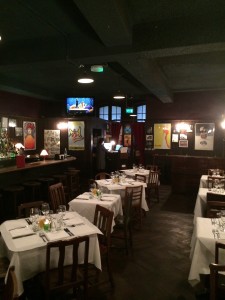 Specifically, where’s the La Scala Salad? This one hasn’t been tossed. It’s been lost. Inspired by the house salad of the La Scala restaurant in Los Angeles, dating from the 1950s, it traditionally consists of salami, chickpeas, mozzarella, iceberg lettuce and vinaigrette served in  large bowl. My recollection is that the Joe Allen version had mayonnaise rather than vinaigrette and the cheese was something harder than mozzarella, more like cheddar, but that’s only my recollection and I’ve had many hot dinners and cold drinks since this LA salad was last spotted on the JA menu. I guess sending a couple of tweets doesn’t amount to much of a campaign but I have suggested they review restoring it to the menu, to which I was told they haven’t been serving it for some while (I know; my point exactly!) but the chef will be duly nagged.

I do hope so. It’s such a wonderful dish and making it appear again shouldn’t be as hard as rocket science, and I’d prefer it to rocket salad. I guess I’ll keep having to check on http://www.joeallen.co.uk

55 thoughts on “FOOD: Joe Allen and the missing salad”