Last week saw the eighth annual Scotch Egg Challenge at The Canonbury gastropub, not far from where I live in North London. I can’t say that wild horses wouldn’t have kept me away because in fact a stray cat did, but I’m sure the evening was a lot of fun. Four judges, all food critics, took part in a blind tasting to decide which was the best offering from those cooked up by chefs from throughout the UK. I think that if they actually ate them all they’d look a bit like Humpty Dumpty did before the fall.

The term ‘scotch’ egg is apparently an abbreviation of ‘scotched’ egg, which is its proper name. Scotching meat (it says here; yep, Wikipedia again) involves hacking it to tenderise or roughly mince it, referring to the sausage meat surrounding the egg. Something that is scotched is generally regarded as being coated in breadcrumbs and fried. Of course, if you’re a vegetarian or vegan, the whole thing is a non-no, but I’m neither and on the right occasion I think the delicacy is a definite yes-yes. This is especially the case when we’re talking about the scotch eggs prepared at another local hostelry, The Albion (the front of which is depicted in early-evening wintry light on the home page). These are absolutely delicious. 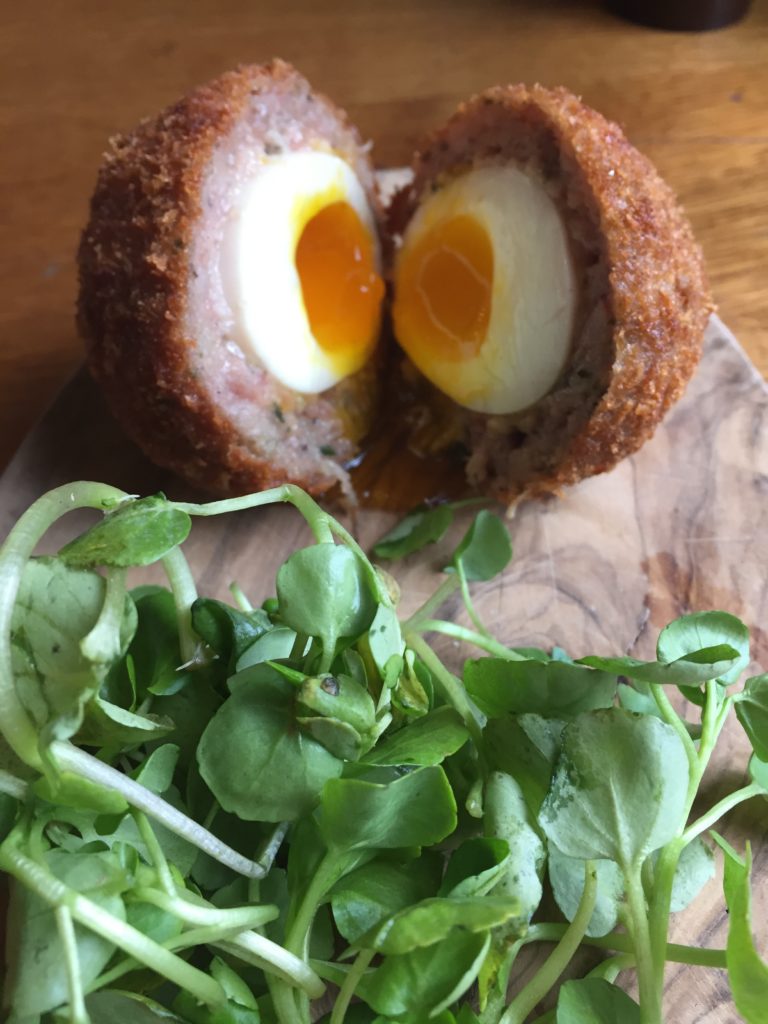 Served warm with a side of lamb’s lettuce, the Albion scotch egg costs £4 and it arrives sunny and runny

Given that the fare at The Albion is so perfect, and also that I am arguably the worst cook in Britain, I have no inclination to try to make my own. I did look at a recipe or two but you know the sort of thing you get…boil the eggs and then quickly scoop into iced water…mix together the sausage meat, egg, flavourings and seasoning…peel the cooled eggs…take a good chunk of mince and pat it out evenly to cover one hand…roll the egg in flour and place it on the mince…I mean, I could go on, but I won’t. I’m told by people who know way more than I do about this stuff, which would cover most people in the UK, that even when there are particular guidelines to be followed, some TV chefs – well, Nigella Lawson at least – don’t bother with boring things like portions, so if you follow strictly what they suggest you do the odds are that you’ll end up with some minor culinary disaster.

Which reminds me…there is a novel by John Lanchester called The Debt to Pleasure. In it the narrator recalls preparing a feast involving a pheasant. He is punctilious in following the cooking instructions and he is hugely looking forward to opening the oven door to see the magnificence of his creation. What he finds instead is a major culinary disaster. He has followed the cooking instructions well enough. What he’d skimped on was the bit about the preparation. He’d forgotten to pluck the bird! Even with a cook as hapless as me, you’d never get that sort of problem with a scotch egg.