FOOD: Not entranced by the entrance but otherwise awesome

Something strikes you as you walk into Social Eating House. It’s a curtain, which is hanging just beyond the door. After that, things can only get better – and they most certainly do.

The dining room is welcoming, with the atmosphere of somewhere that’s been around forever (in a good way) even though you know it hasn’t. The restaurant was opened in 2013, post the unveiling of Pollen Street Social, a Jason Atherton establishment across the other side of Regent Street. Its chef, Paul Hood, migrated to here from there. If one was inclined to be genealogical on the subject of restaurants, one could trace this back to Gordon Ramsay, Atherton being an alumnus of his. I prefer this place, although that is obviously a matter of taste. Talking of which…

My friend and I simply had to have the same starter. Kind of boring, I know, but because it was pressed Cumbrian salted beef shin with spiced tartar, yolk jam and horseradish, I’m sure you’ll understand. (Pickled carrots were also present, though they weren’t a great selling point for me.) When it came to the main courses, we diverged: Cornish hake on the one hand while for me it was the vegetarian option since I figured venison haunch after what I’d just eaten might be rather overdoing the red meat. And what a choice: macaroni with cheddar and parmesan cheese, chanterelles and shaved mushroom. It was utterly awesome. I think you may agree that indeed it looks good enough to eat. I don’t think it could have been improved upon if truffles had been involved, and from me that is high praise. 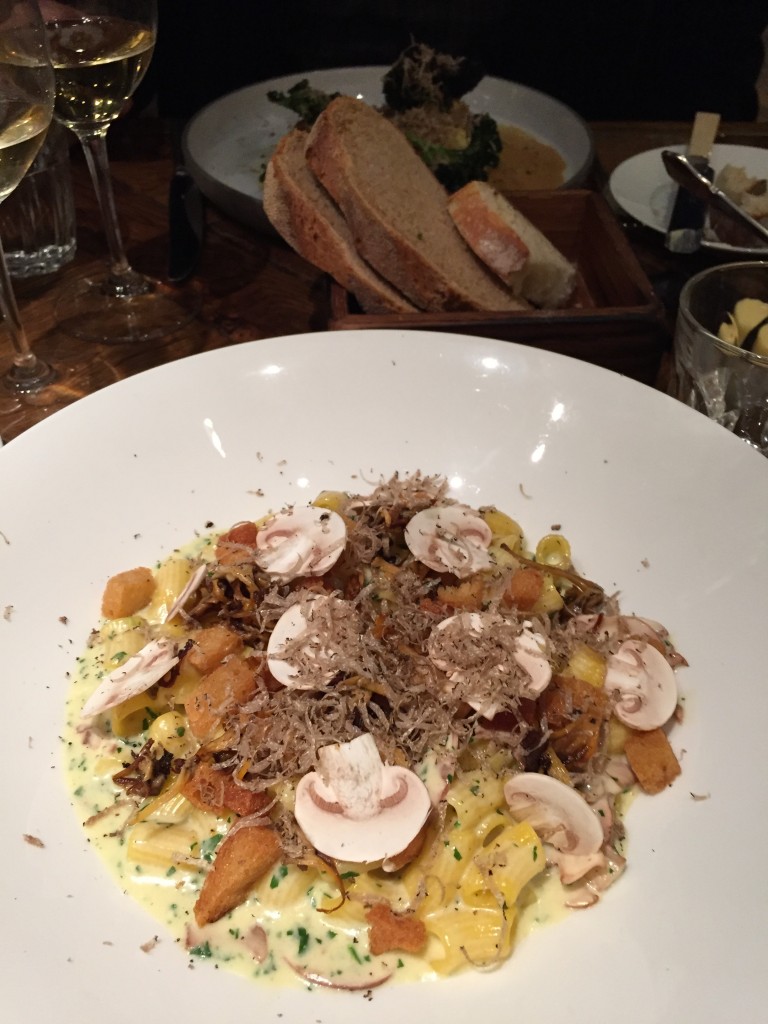 An extraordinarily appetising dish, even if the photo is a bit awry, inadvertently showing a bit of bread

From Poland Street we stay in London W1. It’s a briskish five-minute walk, or 542 steps on the iPhone Health app, from Social Eating House to Savile Row, famous worldwide for its tailoring and known rather more locally for the restaurant Sartoria, which in days of yore began life as part of the Terence Conran chain of eateries. (Talking of health applications, don’t worry: I didn’t eat at both places on the same day.)

The room (shown on the home page) suggests understated luxury, as do the menu prices. I kicked off with battuta di manzo scozzese, or black angus beef with pickled truffle and anchovies, if you prefer it in English. (Spell-check wanted me to make the first word of that in Italian read ‘bathtub’, which wouldn’t be so good.) It was divine. Since this is an Italian restaurant, I couldn’t resist the spaghetti carbonara, the traditional Roman dish which is probably my favourite pasta course. The chef, Francesco Mazzei, is from Calabria rather than the capital, but I wasn’t going to let that deter me. A very good decision. It was rich and tasty and topped off, as it should be, with an egg yoke.

The fritto misto and the sea bass being devoured elsewhere around the table looked wonderful, too, but you can’t have everything. Well, you could, but just think what the health app would tell you!