Where we live in London, you can always go for a walk if you’re feeling a bit down on or around Upper Street. It’s vibrant, cheery; it’s in the heart of Islington. There’s always stuff going on: street entertainment, new shops and pop-ups, new bars and restaurants. It even has an Austrian eaterie, for goodness sake, and you can’t say that about many places. (Well, obviously, unless you’re in Austria.) Chris Corbin and Jeremy King, who invented The Ivy and Le Caprice (you’d think the wheel as well judging by some of their – highly deserved – reviews), have just opened a new venture in the area. It’s called Bellanger and it’s pretty large.

Unlike where I’m talking about. That’s called Oldroyd, at 344 Upper Street, London N1. There are a couple of tables downstairs before you climb up to the main dining room. I say ‘main’ but I sincerely doubt there is room to swing a cat. Not even a kitten. It made my son Ben, who lives in a student flat, suddenly feel as if his accommodation was quite spacious, even though that would be specious. Fay Maschler in the Evening Standard called it “snug”, which is a bit like describing Buckingham Palace as “large”. 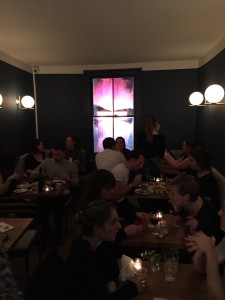 As you can see, it’s a very small room

The restaurant name is eponymous. Before opening his own place, Tom Oldroyd had acquired experience in London at, inter alia, Bocca di Lupo and Polpo. The range of dishes, and the portions in which they are served, means that Oldroyd – like many restaurants these days – encourages the sharing of dishes; they have taken the tapas out of Iberia and made it universal. For example, the wild mushroom croquetas with truffle mayonnaise was a starter dish we ordered to share between the four of us, although I was soon minded to think I should have claimed it all for myself. It tasted sensational. We asked for another helping just to make sure. The seaweed and cider saucisson and the duck liver parfait were terrific, too; they just paled a little in comparison. My main course was squid, chorizo, chickpeas and aioli and that was pretty much up to the standard set by the croquetas/truffle combo. 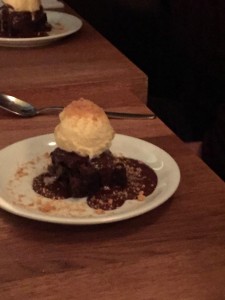 Hot chocolate topped off with vanilla

I seldom eat desserts and didn’t on this occasion either. But in this tiny establishment, my sons found room for still more. They went for the ginger and hazelnut brownie, with chocolate sauce and vanilla ice-cream. It certainly looked wonderful and they said it was. We left what was assuredly a crowded house vowing to return. I hope that starter’s still on the menu when we do.

66 thoughts on “FOOD: Ordering at Oldroyd – small but perfectly formed”