Some reviews seem rather pointless these days. Of movies, for example. There are no cinemas open. Restaurant reviews are another. There is nowhere to eat out. This may change over the course of the next few weeks, especially for places that can offer outside dining, but right now restaurants are out-of-bounds. Small wonder that supermarket sales of alcohol are up something like 30%. That represents in part what would otherwise have been profits for some pub landlords.

No one is accusing Pret a Manger of providing fine dining but time was when you could eat a decent sandwich inside. The photo on the home page was taken on the day the government closed pubs and restaurants (March 20), thereby putting the kibosh on that. Before all hell broke loose, however, I did manage to try out a new restaurant (for me). Terrific it was, too. Everyone knows that Indians love cricket; it’s their national sport. I cannot readily explain how an Indian restaurant of nearly that name has branded itself Kricket (with a ‘k’), but I’m figuring it wasn’t a typo. 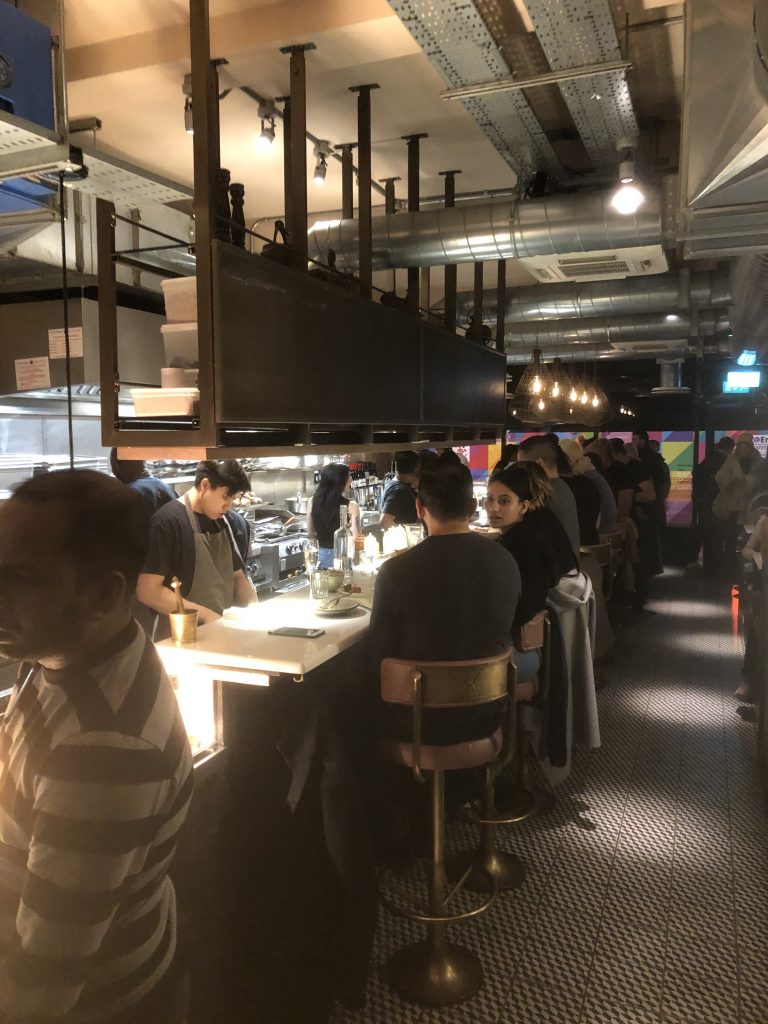 Inside Kricket: when it reopens, I think the stools at the counter are going to have to be a bit further apart

There are three Krickets in London: in Brixton, White City and Soho, the latter being in Denman Street, W1, very close to Piccadilly Circus tube station. Which was the one I went to. This is very fine food indeed, as far removed from a regular curry house as a Michelin-starred restaurant would be from McDonald’s. There were five of us and we shared dishes (something that we likely won’t be doing again for months, if not years, ahead). I’ll start with a starter, the samphire pakoras with date and tamarind chutney and chilli garlic mayonnaise. I could have finished there, too. They were so good I could have happily carried on treating them as both my main course and dessert. But that would have been selfish; there would have been none left for anyone else. As it was, I still had room for the pork cheek with fennel and some aged beef kebab with bone marrow and onions.

In mid-January, as photographs can attest, some 40,000 families sat down for a vast communal meal in celebration of the imminent Chinese new year. This was in Wuhan. We all know how that turned out. This may mean the end of tapas eating as we know it. We’ll be back, at least for some while, to the age-old British way of every man/woman for himself/herself.

Will there be any upsides? It depends on how you view it. Jonathan Meades, who used to do restaurant reviews for the Sunday Times aeons ago, had a particular recurring complaint – waiters who kept the bottle of wine you had ordered somewhere other than on your table, out of arm’s reach. “I’ve paid for it,” he would say. “It should be my right as to when I top up my glass.” I think we can regard that as sorted when the big reopening eventually occurs. Ditto over-zealous waiters checking every single minute that your food is OK and asking if you’ve been here before so you “know how it works”. I’m no bilinguist but I’ve always thought I could understand menu-speak. Until there’s a vaccine, those guys will have gone the way of the dodo.