If you are going to call your restaurant ‘Paradise’, then it had better be good. I mean, even in London it’s not as if there are scores of Sri Lankan restaurants one is looking to distinguish oneself from. Anyhow, Paradise occupies the premises which formerly was Spuntino, a terrific (I thought) eaterie in Rupert Street, London W1, which closed some while ago. I wish better fortune for Paradise, in what could generously be described as challenging times to be looking to establish a venture in the hospitality sector. 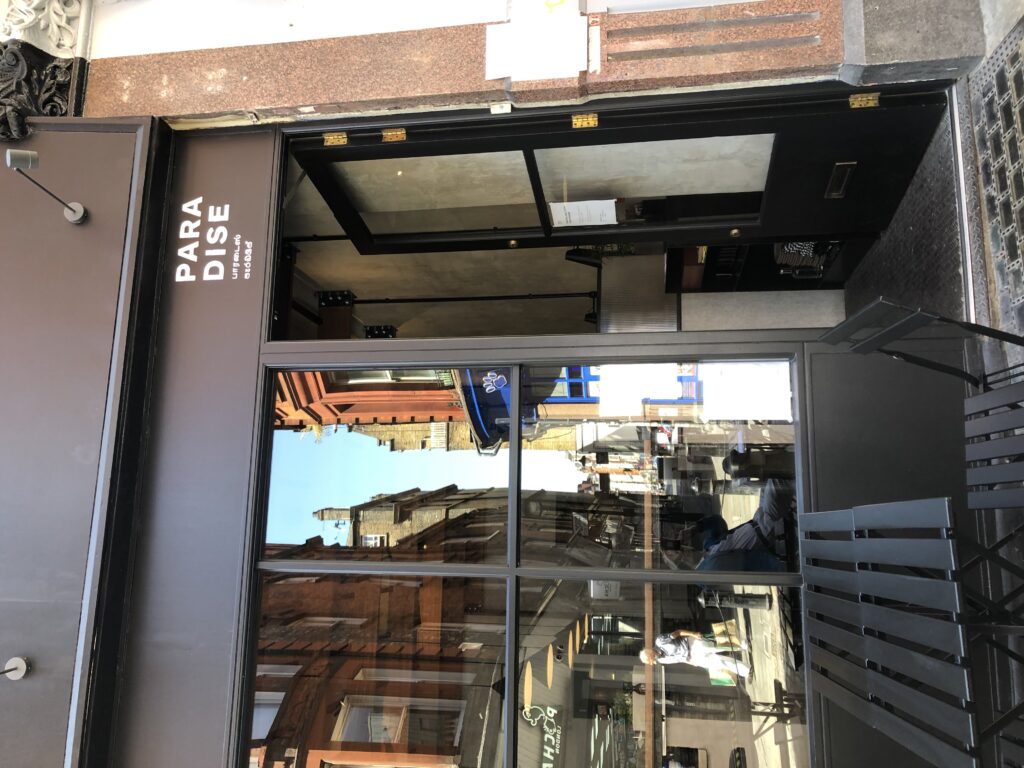 I read the other week that the late Frank Zappa, the legendary jazz/rock musician, once said that writing about music was like dancing about architecture. That’s a sharp analogy; a smart way of saying he regarded it as futile. In some respects, the same may be true of food. It is impossible in words to do justice to the sound of music. Similarly to try to describe the sense of taste via the medium of language. On the other hand, that would be the end of food blogs as we know them, so I’ll press on. 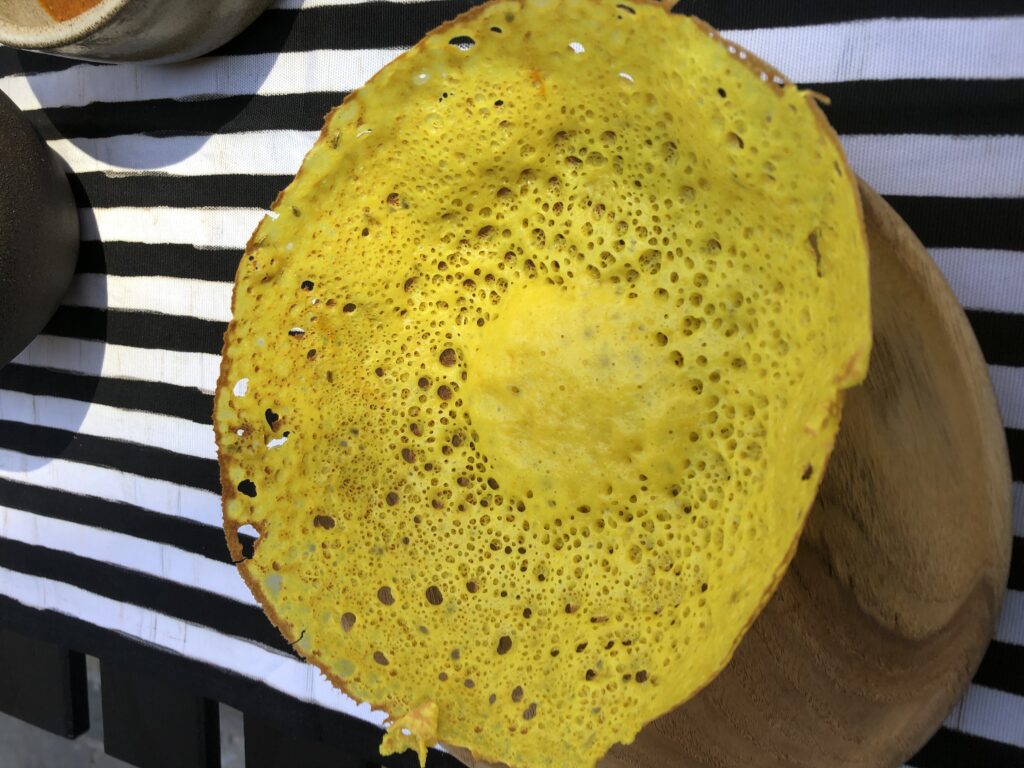 Hoppers are apparently a pancake-like Sri Lankan speciality, this one made of turmeric and fennel seed

First up at Paradise were three options of ‘short eats’, which in my case decisively came down to the mutton shoulder rolls. (The crab option would always be a non-starter starter for me, and I didn’t fancy the chickpea/coconut offering.) There were two of them, utterly delicious, served with a chilli ketchup on the side. There is an advisory on the menu that reads ‘ Some of our dishes are very spicy’. Officially, this did not apply to this particular sauce on the side but for sure it was on the strong side of tasty. 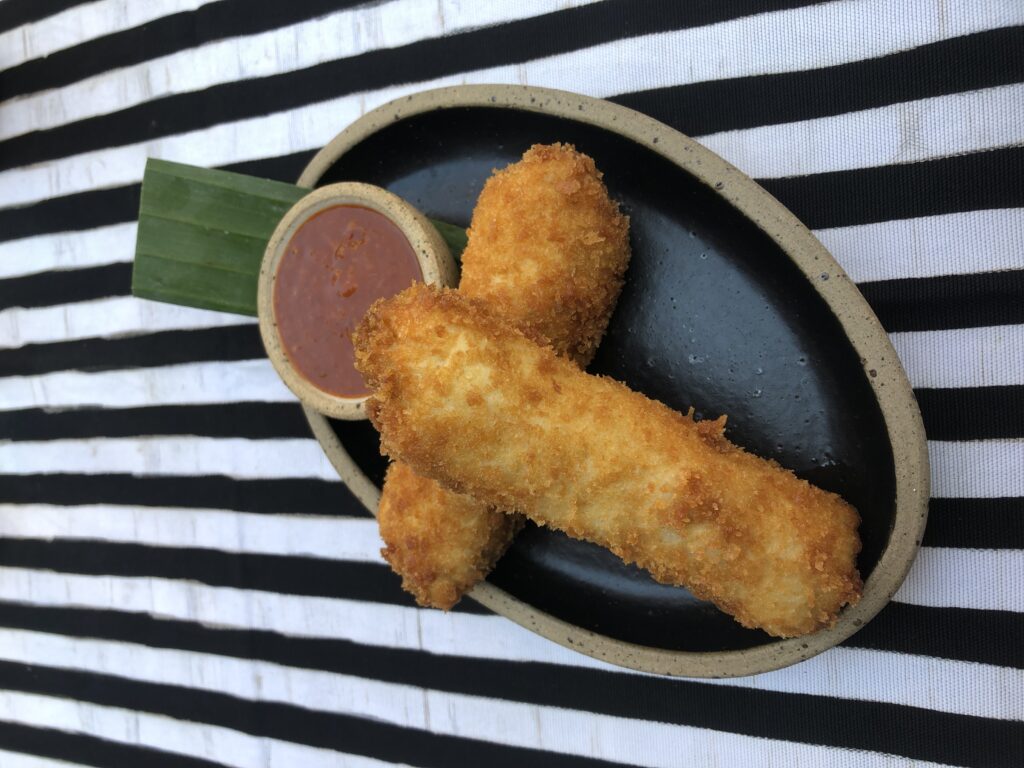 The mutton rolls with fermented chilli on the side; frankly, at £5.90 it’s pretty much a meal on its own

Main courses are either from the sea or the land. I went for the latter, specifically the roasted chicken curry with crispy chicken skin. Ordinarily I agree with those who find it hard to get over-excited about chicken but this was a distinct exception. The portions of chicken were tender, the curry sauce was ideal (for my not-too-spicy taste), the impact of the tangential ingredients, such as cardamom, was judged to perfection and the crispy skin set the whole thing off wonderfully. I also ought to mention the Tuscan red wine I had a glass of, which was the closest thing to rosé they had on offer and in the heat of the day was just divine. 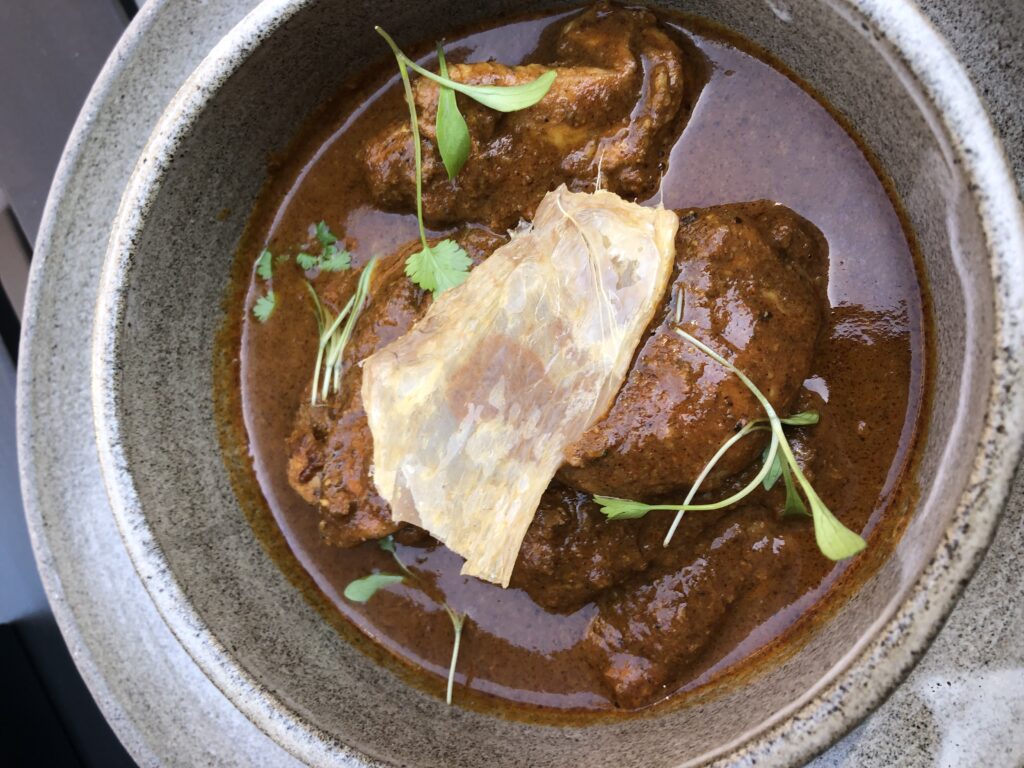 This curry was one of two ‘land’ choices: the alternative was beef brisket with tamarind and cinnamon

Finally, back to Frank Zappa. I suspect his reservations about writing about music would not have extended to food. After all, on arguably his finest album, released in 1969, the tracks included Peaches en Regalia and The Gumbo Variations. The title of the album? Hot Rats. No thank you. Instead I’ll leave you (below) with a bowl of  turmeric dahl in garlic oil. Much nicer. 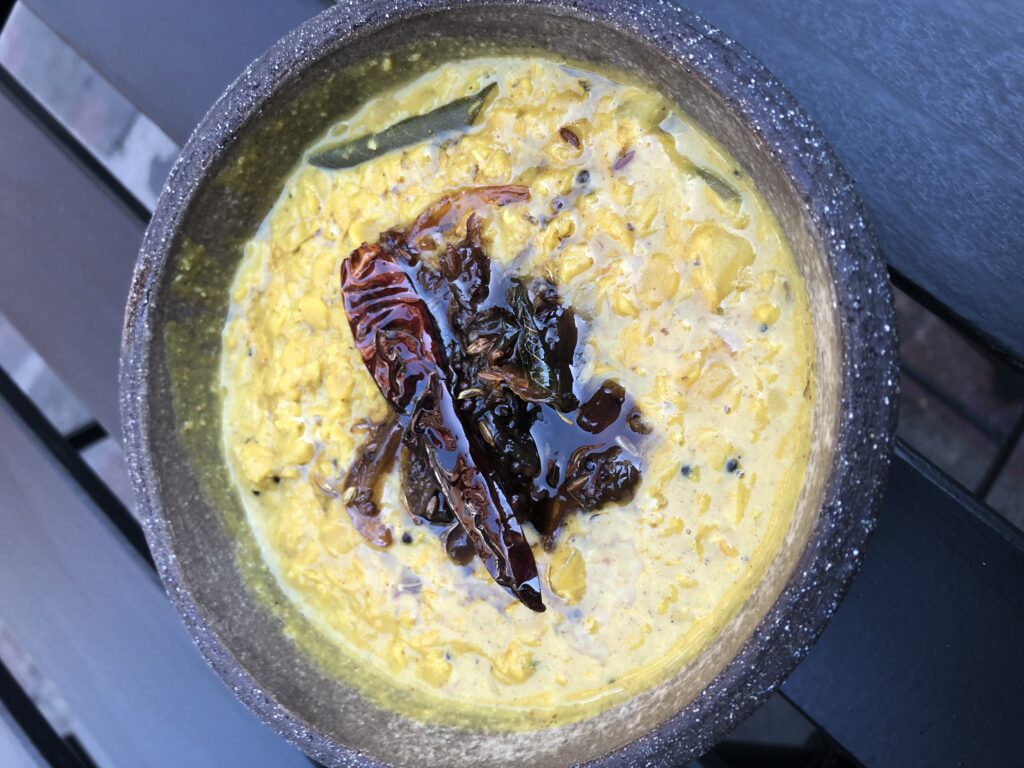