FOOTBALL: Arsenal give the nod to PSG in the Champions League

On Wednesday evening, Arsenal were at home in the Champions League group stage – ‘Match Day 5’, as it’s described –  against Paris St-Germain (PSG), the regular French champions of recent seasons and likely for the foreseeable future given their lavish funding. This was effectively a shoot-out to decide who would top the group. Both had 10 points from four fixtures, having drawn 1-1 with each other in Paris during the first round of matches in September and both having won the three matches each had played against the two other teams in the group: Ludogorets Razgrad of Bulgaria and FC Basel of Switzerland. Arsenal had played the former twice, PSG likewise with the latter. Both were assured of qualification for the knock-out stages beginning in February but topping the group would mean having the second leg at home in the round of the last 16 and probably getting a less daunting opponent (although given that two of those ‘less daunting’ opponents would potentially be Bayern Munich and/or one of Real Madrid or Borussia Dortmund, in either of those instances it really wouldn’t seem to make much difference) in the draw which will be on December 12.

The mathematics were, as often, quite complicated. If either team won, they would be guaranteed to top the group. If it was a 0-0 draw then Arsenal would have to match PSG’s result in the last game on December 6 to finish top. If it ended 2-2 or in a higher scoring draw, then PSG would be in that position. If it finished 1-1 and they both got the same result as each other on December 6, it would come down to overall goal difference. Clear as mud so far? 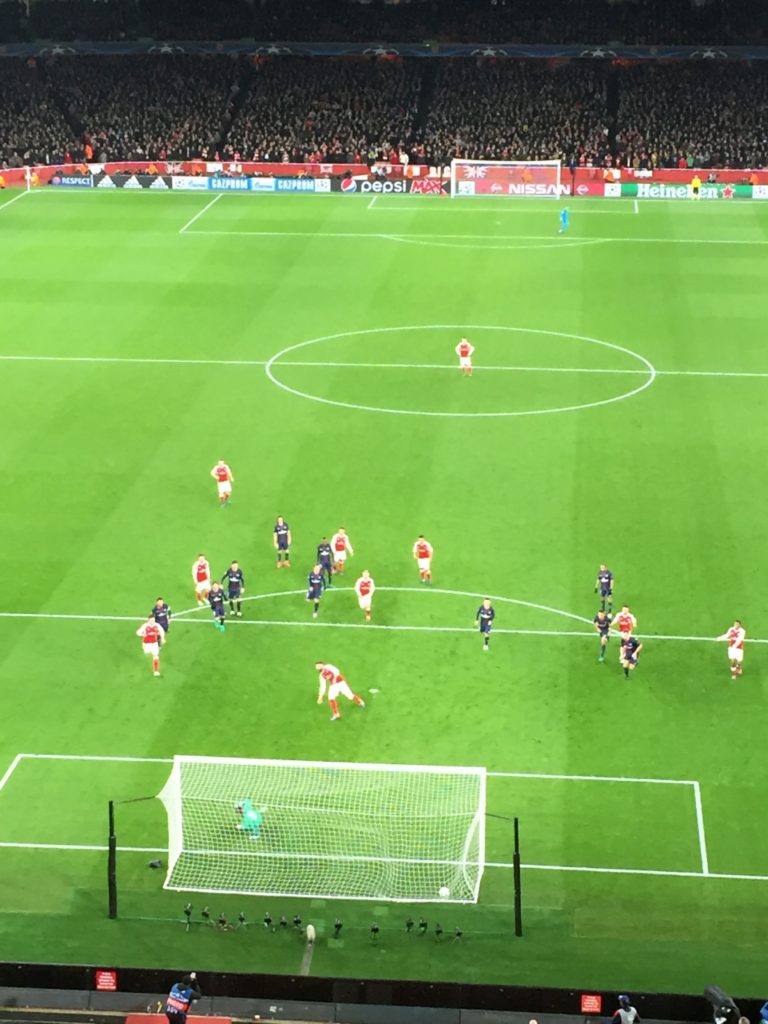 In fact, of course, it ended 2-2. So the blue Fly Emirates team from Paris had the better of it compared to the red Fly Emirates team from London…in the Emirates Stadium. (See photo on the home page.) Not much danger of ambush marketing there! Given that PSG’s last game is at home to Ludogorets, it would seem that, as per usual, Arsenal will come second in their group and will have to travel to play someone indeed daunting in the second leg.

As for the match, PSG took the lead in the 18th minute when Edinson Cavani stretched to knock the ball in from close range. Arsenal could have no complaints and on the balance of play were pretty fortunate to be level at the break, their equaliser coming in first-half injury time via an Olivier Giroud penalty after Alexis Sanchez had been tripped by Grzegorz Krychowiak, a decision PSG resented to the extent of initiating a bout of ‘handbags’ before Giroud took the spot kick. A ricochet off Marco Verratti led to a PSG own-goal on the hour but the Gunners were only able to sustain their advantage for 17 minutes. Their manager, Arsene Wenger, had been on the verge of substituting Alex Iwobi with Granit Xhaka but, as the old adage dictates one should, he delayed doing that until his team had defended a corner. Lucas Moura headed the resulting cross towards goal and a slight flick off Iwobi’s head flat-footed goalkeeper David Ospina and PSG were level at the 2-2 scoreline that suited them a whole lot better than it did Arsenal. Or at least it does until they get Bayern Munich in next month’s draw.

52 thoughts on “FOOTBALL: Arsenal give the nod to PSG in the Champions League”