FOOTBALL: European soccer not the same for the Gunners…and Bloody BT!

After two decades of enjoying the lavish banquets of Champions League football, Arsenal supporters this season are having to make do with supping gruel. They play on Thursday nights in the Europa League, so the famous Champions League banner (which make an appearance on this page!) will not be waved at the Emirates Stadium for at least another year. As it happened, while Arsenal opened their rather reluctant campaign against Cologne with a 3-1 win last Thursday, all the news surrounding the match concerned the Cologne fans, who ‘celebrated’ their club returning to European competition for the first time in 25 years by causing sufficient havoc for the kick-off to be delayed by an hour.

Reportedly 20,000 Cologne fans had made the trip to London, which showed commendable enthusiasm for their team – “all these fans have known is relegation after relegation,” said one of them; in fact, five demotions in the past 20 years – but logistically it wasn’t so great. They had only been allocated 3,000 seats between them. (Some of them are shown in the photo on the home page.) Some of them had apparently bought tickets off Arsenal fans, themselves less excited about their club’s participation in Europe’s lesser footy competition than their German counterparts, and the inevitable complications that brought, with the inbuilt plans for segregating opposing fans being ripped apart, meant there was some chaos when Cologne took the lead and Arsenal fans realised the people sitting near them in the home sections of the stadium were in fact cheering on the enemy. This effect was multiplied by the fact that both team’s first-choice colours are red. In the end it was pleasingly surprising that only five arrests were made and, more importantly, nobody was seriously hurt. Arsenal’s former home was sarcastically nicknamed the ‘Highbury Library’ by away fans, on account of the comparative passive nature of the majority of its inhabitants, but the fact that the home fans of the Gunners are not the most fervent in the land was perhaps just as well on this particular night. As the manager, Arsene Wenger, said: “Our supporters dealt with the situation well.” 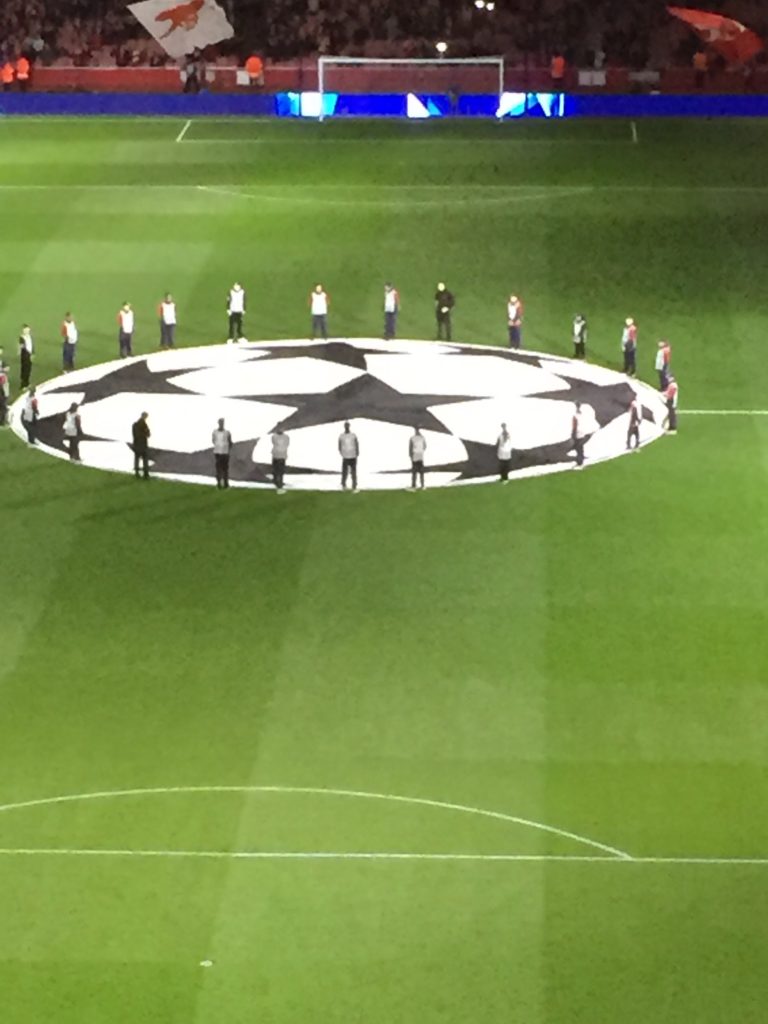 I legitimately had a ticket for the game but when my son announced the kick-off had been delayed until 9.05 because of crowd trouble, we just said ‘sod it’ and went to the pub. I watched the second half on the telly. However, if the Cologne fans behave like that when they play away to Red Star Belgrade in December, I hate to think what might happen. Best to give anywhere in Serbia a swerve that evening, I think.

Finally, among the newspaper commentators on the affair was Archie Rhind-Tutt in the Evening Standard. Archie and his splendid name were a staple of the German football coverage on the marvellous European Football Show (EFS), wonderfully hosted (mostly) by James Richardson from 6-30-7.30 on BT Sport on Sunday evenings. Until, that is, bloody BT went and announced its cancellation at the end of last season. John Nicholson wrote then on Football 365: “To watch it is to feel like you’re among your cleverest, funniest friends…it was also an absolute groundbreaker in that its host and pundits were all journalists. Not an ex pro in sight…” Too right. I am thinking of how to take revenge on BT, but moving my email account would be a huge hassle and to stop watching football on the channel would be a pointless self-sacrifice. But I’m working on it…

94 thoughts on “FOOTBALL: European soccer not the same for the Gunners…and Bloody BT!”