FOOTBALL: From Russia with Low (it’s pronounced a bit like ‘love’)

Joachim Low is the manager of the current world football champions, Germany. Either under that name or West Germany, they have won the World Cup four times, the same number as Italy, one less than Brazil. England, the only home country to have won it and the only home nation which will be competing in the 2018 renewal in Russia next summer, have won it just once, beating Germany in the final in 1966. Moving on…

The draw for next year’s tournament took place in Moscow on Friday. (The official logo is shown on the home page.) Four years ago in Brazil, England got stuck with Italy, Uruguay and Costa Rica and failed to emerge from the group stage. This time around, as second seeds, they were drawn with Belgium, Tunisia and Panama. On paper at least that looks more like the group of dreams than the one of death. (Hoping the dreams aren’t caused because the team’s performances have sent us to sleep.) But then we got bested by Costa Rico in 2014 and then by Iceland in the European Championships last year. It has at times seemed unfortunate for England that the matches were not played on paper rather than on grass.

At the moment, the host nation will officially be the worst team there. Russia’s squad, known as the Sbornaya, is presently ranked 65th in the FIFA rankings, just behind non-football giants Saudi Arabia (63). A trifle bizarrely, the opening match of the tournament will feature the two worst teams: Russia vs Saudi. I’m sure Vladimir Putin will concoct something in due course to distract from this embarrassment, or else he’ll simply make sure he goes nowhere near any of Russia’s matches. 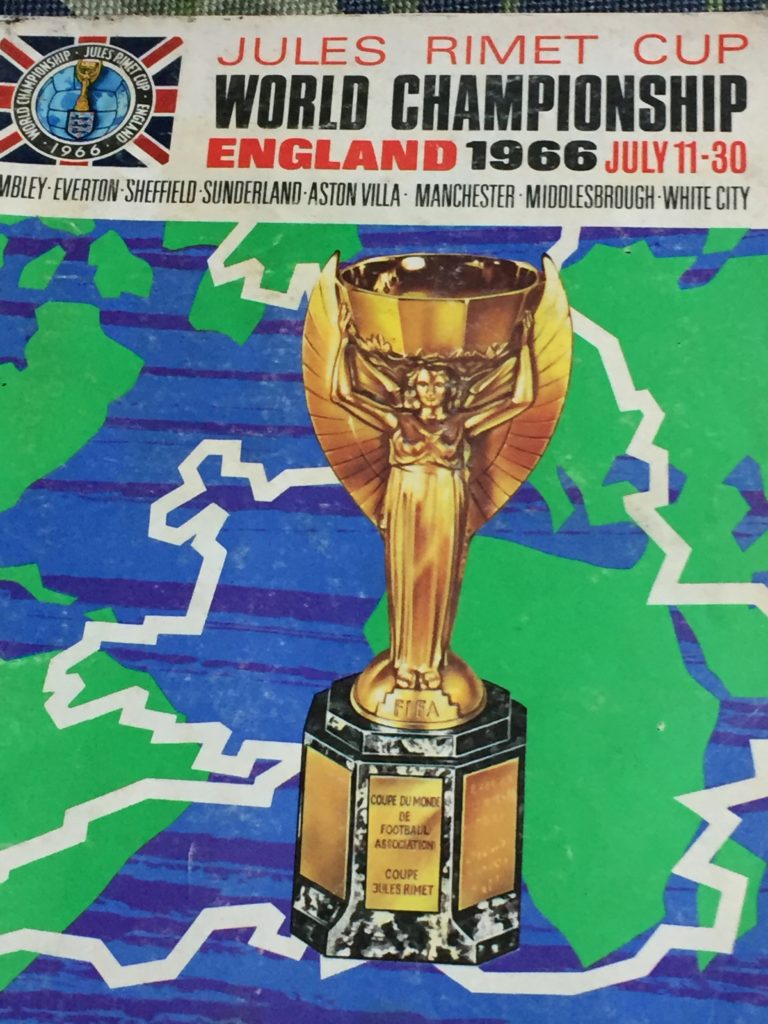 Those were the days…the programme for the 1966 World Cup in England, which had a very good ending!

Russia was awarded the World Cup by FIFA on December 2, 2010. Since then the country’s image, as well as its football team, has taken one hell of a beating. It’s been fighting wars in the Ukraine and Syria, had its athletes barred from competing in the World Athletics Championships in London last August and maybe from the next Winter Olympics because of drug-related offences, and it has been accused of cyber meddling in elections elsewhere around the globe, notably in the United States. (Which did not qualify for this World Cup.) Still, we need to keep politics out of sport, yes?

That might have been even harder to do next summer if Syria had made it through to the finals. That war-torn nation, which had to play its home matches in Malaysia for security reasons, was only eliminated after a playoff with Australia. Even so, there has to be huge potential for this World Cup being very much a political football if events should conspire, unlikely as this is, to pit Iran against the Saudis, their arch enemies. In 1970, a playoff for a place to participate in the 1970 World Cup in Mexico led to a four-day war between El Salvador and Honduras in which 3,000 people were killed. On the football front, El Salvador made it to the finals where they lost all three matches. Honduras would have made it to Russia if they had not, like Syria before them, been beaten in a playoff by Australia. I’m afraid you can’t keep politics out of sport.

Anyhow, I’m looking forward to the World Cup, albeit I won’t be going there; I’m happy I’ll be watching it from my sofa. With England’s matches, sometimes from behind it.

69 thoughts on “FOOTBALL: From Russia with Low (it’s pronounced a bit like ‘love’)”