FOOTBALL: Going to ‘Wem-ber-ley’, yes, but it’s the getting home that’s the killer

The FA Cup semi-finals have been and gone for another year. No replays any more, which I think is a good thing (they should get rid of them altogether in my opinion; if they can abolish them for this stage and the final, what’s so precious about the third round?) but also no longer ‘neutral grounds’ for the semis. Que sera sera used to be the football anthem if your team had reached the final at Wembley. Now it merely means you’re in the shake-up.

I remember the FA Cup Final of 1966, Sheffield Wednesday vs Everton. The Owls led 2-0 after an hour and then contrived to lose 3-2. I was inconsolable. Oddly enough, Wednesday have to accept (probably a small) part of the blame for both semis now being held at Wembley. In 1993, they reached that stage and were drawn to play Sheffield United. The other semi was Arsenal vs Spurs. Completely reasonably, the FA scheduled that match for Wembley. The all-Sheffield affair was allocated to Leeds, where the pitch was a dump but at least Elland Road is pretty close to Sheffield. The Steel City fans went bonkers – the ground was too small; this would give the victorious North London team an advantage when it came to the final; and we want a grand Wembley day out! And so on. 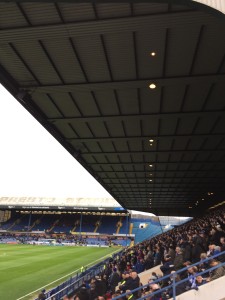 Hillsborough, home of Sheffield Wednesday and until the tragedy of 1989 – and the FA’s switch to hold all semi-finals at Wembley – a regular home of last-four football

They duly got what they wished for. The next year the semis were Manchester United vs Oldham and Chelsea vs Luton, both again at Wembley. No danger of sell-outs there! But the seed had been planted and, after a shortish reversion to common sense before the FA got in dire need of more revenue from Wembley, we now have what we have. Prior to 1966, and for a couple of decades after that until the horror-show of the Liverpool/Forest Hillsborough semi-final of 1989, Sheffield Wednesday’s main connection with the latter stages of the FA Cup was as a regular provider of a semi-final venue. Wembley was romantic – the singing of Abide With Me; the only club match of the season shown live on television – but you could only go there once (replayed finals excepted). Now football is wall-to-wall entertainment and the notion of the fans’ convenience – as in “let’s hold this in Leeds” – doesn’t enter any equation. The train companies, who had known the date and time of this year’s semi-finals for aeons, couldn’t be bothered to try to get fans home to either Liverpool or Manchester on the Saturday evening, at least assuming said fans wanted to be sure that if they’d bought a ticket they could stay to watch until the end. No wonder it’s often referred to as Notwork Rail.

Anyhow, as you’ll know, this years semis ended with wins for Man U over Everton and Crystal Palace over Watford. We’ll find out who wins the famous old trophy on May 21. But one final (pun intended) thought. The losers of the last two finals – Hull City and Aston Villa – have been relegated from the Premier League the following season, so perhaps something there for the Palace fans to think about. But surely not for United’s?

48 thoughts on “FOOTBALL: Going to ‘Wem-ber-ley’, yes, but it’s the getting home that’s the killer”