FOOTBALL: One Sunday in September: the story of Leicester Gritty vs Aston Vanilla

On Saturday afternoon, Leicester City host Norwich City in the Premier league. The home team, who were initially quoted at odds of 5,000-1 to win the title, have a lead of two points with 12 games to play. Also on Saturday, Aston Villa travel to Stoke City. At this stage they are a seemingly forlorn nine points from safety. Who could have predicted this? As of now we know that Leicester might win the Premier League and they look close to nailed-on to be in the Champions League next season, an extraordinary turnaround from this time last year when they looked nailed-on to be relegated. It’s not mathematically over for Villa but they don’t look so much nailed-on to be going down as…well, they’re being crucified.

There have been 26 rounds of matches in this season’s campaign. We won’t know until it’s over which really were the most significant moments in it but right now a candidate for the Numero Uno position has to be a game that was played on Sunday September 13, 2015, the fifth match of the season for both teams. They were Leicester and Villa, the match being played at the former’s King Power Stadium.

After four games, Leicester were in third position in the table with eight points (two wins and two draws), behind Manchester City (12 points) and Crystal Palace (9). Villa were 12th, one of five teams on four points (one win, one draw, two losses). It was early days and no reason to suspect that Villa’s season would be a whole lot worse than Leicester’s, especially for a team that had been strong enough reach the FA Cup Final four months beforehand. 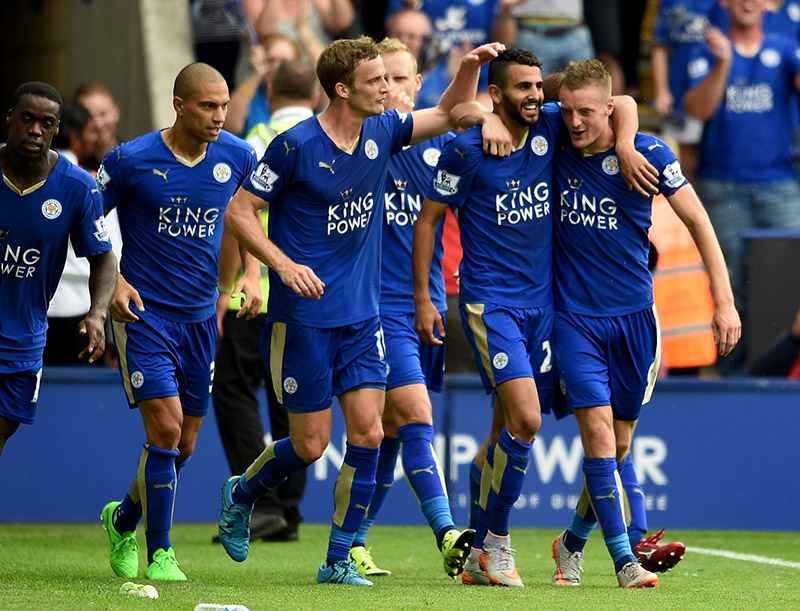 A hard-working ethic and spirit, plus some outstanding individual talent, has propelled Leicester to the top of the Premier League

This was even less so when Villa were the dominant team in the first half and led at the interval thanks to a goal from Jack Grealish. When Carlos Gil made it 2-0 after 63 minutes, Villa were on their way to being only a point adrift of their Midlands rivals. But with 18 minutes left Ritchie de Laet volleyed one in for the home team and Villa, who had looked composed and confident, began to get the jitters. Badly. With eight minutes left, Jamie Vardy (of course) bundled in an equaliser. If anyone was going to win this match, there was no doubt who it was going to be. In the final minute of normal time, Nathan Dyer nodded a brave header past Brad Guzan in the Villa goal – he was knocked out in a collision with the goalkeeper during the process – and the recovery was complete.

For Villa, there has been no recovery. They didn’t win in the league again during 2015. Their manager at Leicester that day, Tim Sherwood, said afterwards: “I’ve never felt this bad. Ever.” Although perhaps he did few weeks later when the inevitable sack arrived. For the Foxes, a first home defeat of the season arrived the next time out when Arsenal were the visitors. Everyone (except perhaps Gary Lineker?) thought Leicester had made a marvellous start to the season but now reality would check in. Well, the reality is that Leicester have only lost twice more since. What they did that balmy Sunday afternoon at the King Power may have instilled the self-belief that they may yet ride all the way to the title.