The Premier League is big business and part of the huge revenues its clubs generate derive from the sales of replica shirts from their official merchandise outlets. They bank on shifting a lot of shirts. And they have nifty ways to maximise their profits from those sales. For example, you want the name of your favourite player on the back of the shirt? Well, if you’re a Manchester United fan, it will work out quite a bit cheaper if your hero is Fred rather than Aaron Wan-Bissaka.

These days, of course, teams don’t only have two kits – a home one and an away one, the latter for when they are playing at the ground of a team which has an identical or similar-looking strip as their own, such as when Man U play Liverpool. There’s always the third kit, too, the reason for which is to make more money by encouraging kids to persuade their parents that they really do need all three. I mean, except when they play each other, Premier League teams Norwich and Watford (who both wear yellow) and Wolves have no colour-clash concerns. One change kit would serve nicely. But that wouldn’t be as lucrative. As if to rub salt into the wounds of the traditionalists, Wolves (whose shirts are old gold) played recent matches against Manchester City (sky blue) and United (red) wearing black shirts. In the photo you see here, Leeds United (who normally play in white) changed to a pointless light-blue ensemble for a match against Arsenal. When Spurs play at Arsenal, they don’t change their white shirts. But then if you have a third kit to sell, I guess the best way to promote it is to have the players wear it with some regularity. 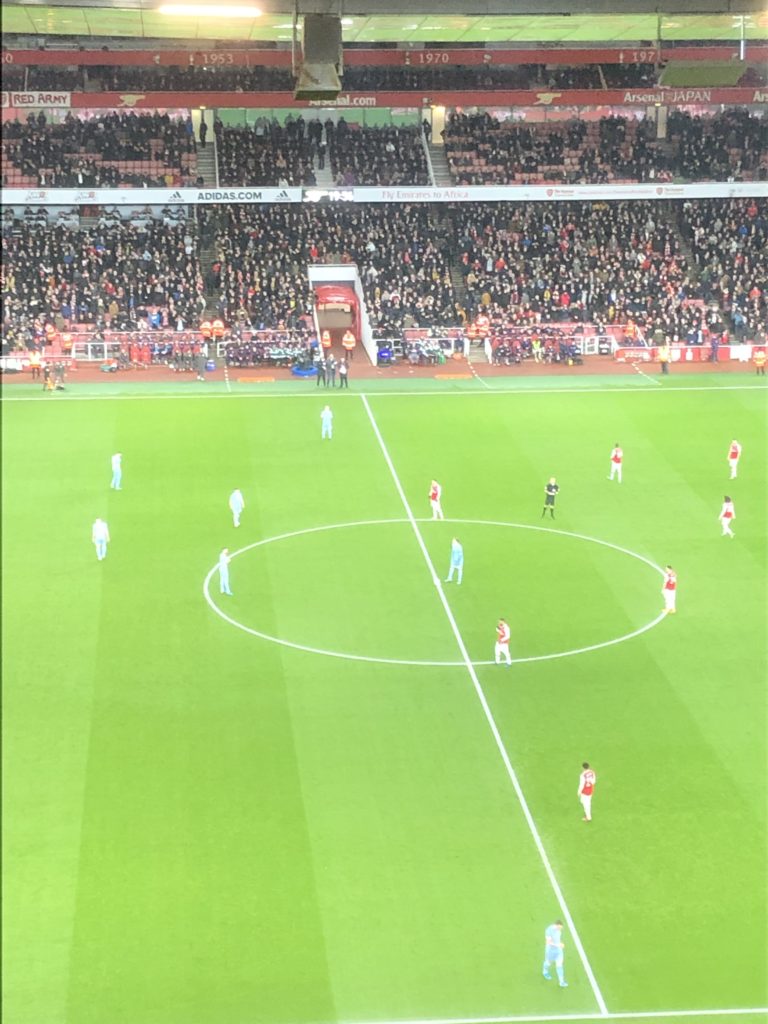 More recently, and rather more perniciously, there is the matter of the logos displayed on those shirts. Ten clubs in the Premier League (i.e. half of them) have the name of a gambling company emblazoned on their tops, among these being West Ham United (see photo on the home page). Reportedly, of the cumulative £350 annual income that Premier League teams receive from shirt sponsorship, £69 million is from betting companies, although none of the so-called Big 6 – Arsenal, Chelsea, Liverpool, Man City, Man United and Tottenham Hotspur – have such connections. (If you think 10 out of 20 is a high number, in the Championship, which is sponsored by Sky Bet, 17 of the 24 teams have shirts sponsored by gaming companies, perhaps notably Stoke City, which is owned by the owners of Bet365 and who play at a ground called the Bet365 Stadium. That’s a full house right there.)

To state the obvious, it is less than ideal that football, which has a high proportion of young people paying close attention to it, should be providing such a relentless promotional platform for an activity which can be addictive and harmful. To drop down into the Championship again, Derby County’s shirts are sponsored by an online casino called 32Red, one of the consequence of this deal being that the club’s most high-profile player, Wayne Rooney, has 32 as his shirt number. The government is committed to a review of the 2005 Gambling Act and changes in the laws concerning shirt sponsorship are expected. Whether this will be before Brexit actually gets done is, I suspect, a moot point.