FOOTBALL: The game’s most detested genius

Tonight sees the opening game of the new Premier League season, with Liverpool playing Norwich City at Anfield. The hosts are, of course, the current European champions. This story is about one of football’s world champions.

Asif Kapadia has made two hugely critically-acclaimed documentaries: Senna and Amy, the latter about Amy Winehouse. Both she and Ayrton Senna are dead. Diego Armando Maradona is (somehow) not, despite the drugs, the prostitutes and his sometime connections to the mafia-related underworld. Kapadia has used both his names in entitling his latest docudrama Diego Maradona, because there is Diego, who is a good guy, and Maradona, who is not. I think you should see the movie (the photo on the home page is a still from it), but this is not a film review. This is a brief blog about the most brilliant, controversial footballer who has ever lived. 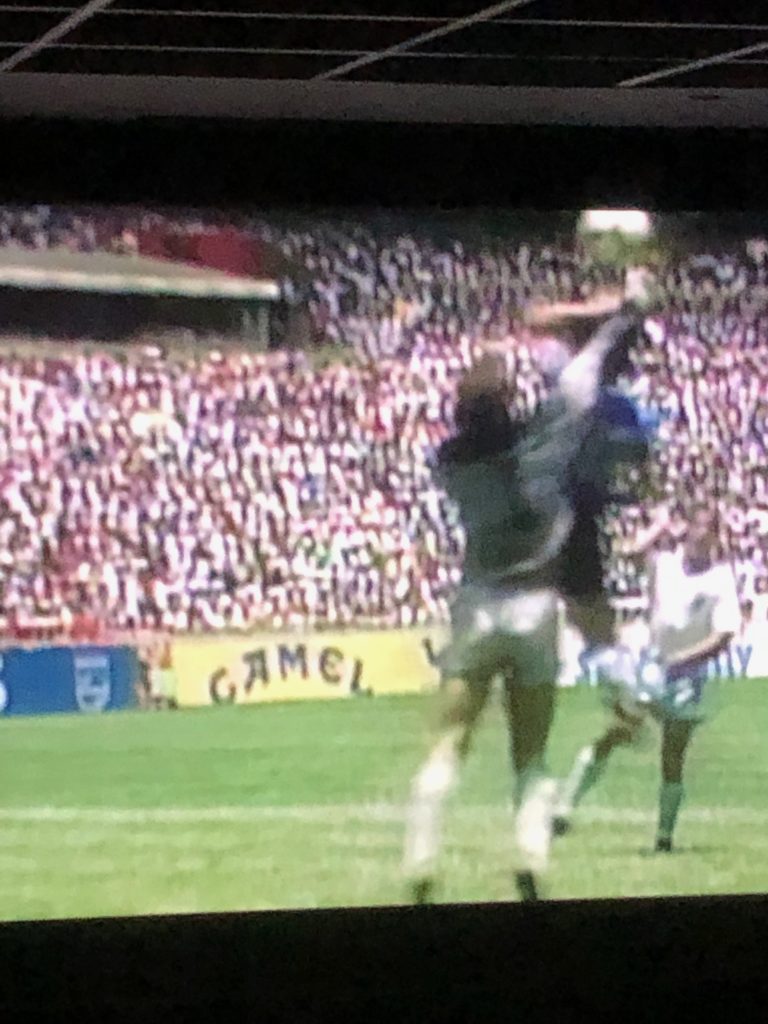 The Hand of Die(God): Maradona uses his fist to score that goal past England goalkeeper Peter Shilton

The apogee of Maradona’s career existed between 1986 and 1990, taking in two World Cup Finals and the best years of his playing days at Napoli, a club reviled by fans of other teams in Serie A for hailing from a city the rest of Italy regarded as a dump; corrupt and dirty. To give another plug to Kapadia’a film (which absolutely does justice to what I am about to describe), the ‘what the fuck’ look Maradona gives when the first question he gets at his Napoli-signing press conference is about the Camorra (the Neopolitan Mafia) is priceless. It’s telling how the club president chose to answer that one for him…

Argentina’s win the 1986 World Cup in Mexico was climaxed with a 3-2 victory over West (as it was then) Germany in the final, but it’s best remembered in England (and, celebratedly so, in Scotland) for his ‘Hand of God’ first goal in the quarter-finals, this soon being followed by one of the greatest solo goals ever scored. His triumphalism at that moment was in part inspired by the recent Britain/Argentina war over the Falkland Islands, which Argentina lost after years of telling its people it was winning. “England was beating us 20-0”, reflects Maradona.

He was by then a Napoli player, having joined from Barcelona. Napoli had never won the Italian league at that point. With Maradona, they won it in 1987 and 1990 (plus the UEFA Cup in 1989). Maradona described that first title as the greatest moment in his career. What, more than winning the World Cup the previous year? Yes, because he had won the league in the country in which he lived and “because they took away the chance for me to play in the World Cup in my home country”. In 1978, aged 17, he had been shocked to be omitted from the squad which would beat Holland in the final in Buenos Aires. Since Argentina won the tournament, however, one cannot say that the manager, César Luis Menotti, made the wrong call.

In summer 1990, with Napoli recently crowned as champions again, the World Cup was staged in Italy. The hosts played Argentina in the semi-finals. In Naples. Before the match, Maradona had encouraged the locals to support Argentina given that the rest of the country routinely despised them. Not many followed his advice but after Argentina had prevailed in a penalty shoot-out, Maradona being among the scorers, the boos rained down on him when Argentina lined up for their national anthem ahead of the final in Rome, in which this time they were beaten by the Germans. In the country he called home, the natives let him know in no uncertain terms just what they thought of him. For the Napoli tifosi, he was the saviour of their club. For the rest of Italy, he was sin incarnate.

Kapadia’s work highlights Maradona’s upbringing in the impoverished shanty of Villa Fiorito and his subsequently chaotic private life. But, football-wise, there is this: I think no one disputes that if you take away Maradona then Argentina don’t get to play in consecutive World Cup Finals; Napoli don’t twice get to win Serie A. In essence, the guy not only won a World Cup single-handedly, he won two league titles on his own. There has never been a more brilliant footballer. Nor one so controversial.