There was little doubt, on paper at least, which was the most appetising opening Premier League fixture of the 2016-7 season: Arsenal v Liverpool at the Emirates Stadium in North London. Both teams enter this season with a lot to look forward to, including Arsenal attempting to win the Premier League for the first time since 2004 and Liverpool seeking to win it for the first time ever. The last time they were champions, in 1990, the Premier League hadn’t been invented. On the other hand, Liverpool have won the European Cup five times to Arsenal’s none and the previous weekend they had beaten the Spanish champions Barcelona by a scarcely believable 4-0. Yes, Barcelona! OK, it was a friendly but it was still Barca, with Lionel Messi, Luis Suarez and all.

But, of course, Arsenal v Liverpool was not being played on paper, albeit the grass on Arsenal’s pitch is smoother than a ream of Basildon Bond. And, of course, it wasn’t played on a Saturday. When the fixtures were released in mid-June, you could safely have stuck your mortgage on Sky shifting this to 4 o’clock on Sunday, which is what duly occurred.

This being top-flight English football, neither of the managers were English. Arsene Wenger, a Frenchman, has been in charge of Arsenal since forever, wining the league three times but increasingly too long ago for many Gunners’ die-hards. Jurgen Klopp, who’s German, has been at Liverpool for less than a year, arriving to great fanfare shortly after resigning from Borussia Dortmund where he twice recently won the league in defiance of the mighty behemoths of Bayern Munich. Comparatively extraordinarily these days, four of the seven goals this Sunday were scored by Englishmen, three of them for Arsenal. But that wasn’t enough to stop them losing 4-3. 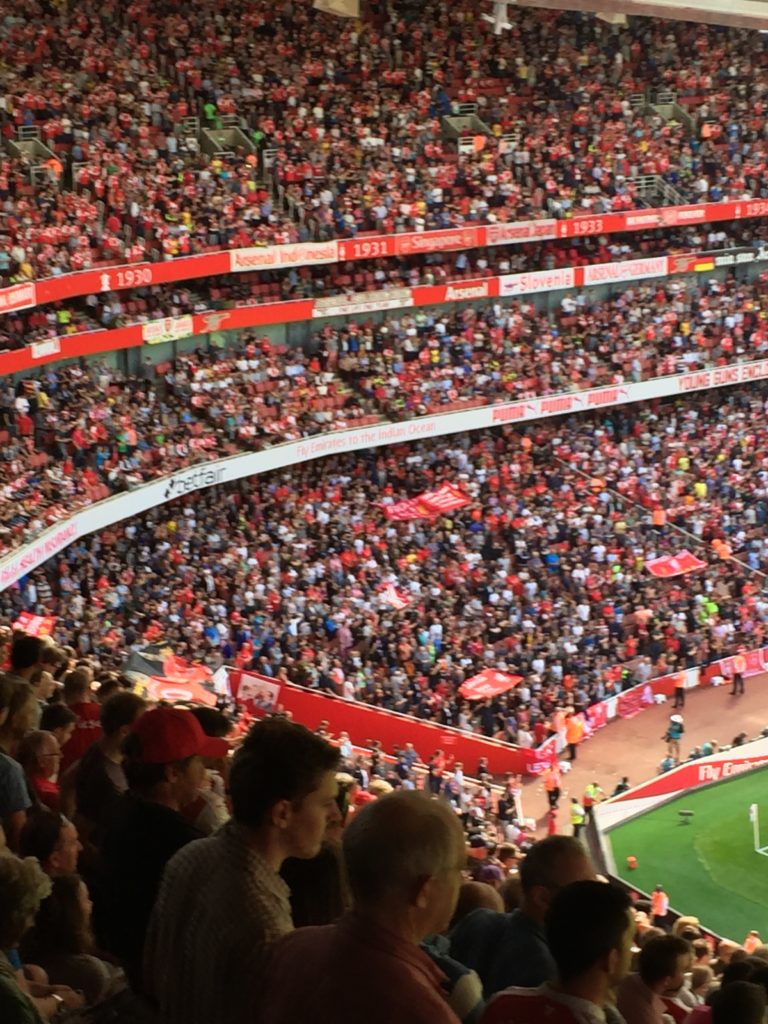 For the past five seasons, Arsenal have begun with a home game. This was the fourth time since 2012 that they have lost it, the second time to Liverpool. They lost this one from 1-0 up because in a frantic 18 minutes either side of half-time Liverpool went berserk to lead 4-1. One often hears it said when a team has won, say, 3-0 that “it could have been ten”. In this particular spell, the four could have been five – only a tremendous save from Petr Cech denied Philippe Countinho his hat trick – but that’s unquestionably efficient finishing. There were still 15 minutes left when Calum Chambers nodded home to reduce the visitors’ advantage to a solitary goal but that proved to be enough.

The away fans were left to serenade their team and trot out the inevitable renditions of You’ll Never Walk Alone. For Arsene Wenger, the sound of some boos cascading down from the terraces might have made him wish that, at least for a  few moments, the place bore witness to the old jokes, with reference to Arsenal’s former ground, about the ‘Highbury Library’. But football being what it is, the next celebration is only ever one win away. Or even one at home.