England got their Russian World Cup campaign underway with victory against Tunisia in the Volgograd Arena yesterday. Just like old times. A couple of decades ago, England began the 1998 tournament in France with a 2-0 victory over the same opponents in Marseille (an image of which is shown on the home page).

I have a cutting from that year, a smart-ass preview piece from The Guardian in a regular feature it ran in those days called ‘Pass notes’. Dated Monday June 15, it provided information about England’s opponents for the match. Under ‘Position?’ they had “North Africa, with the Med up front and the Sahara at the back”. For ‘Anyone putting in the crosses?’, it was “Not since the 14th century, when the last indigenous Christian community disappeared. We’re talking Islam right across the park.” It continued: ‘United?’ “More or less. There’s a bit of fundamental argy-bargy…but Tunisia wins the fair play award compared with its neighbours.” It then finished with reference to four England players of the day:

Shearers? Tunisia’s sheep population: 7.6 million.
Seamen? The coastline is 700 miles long and the fishing industry employs about 22,500 people.
Batty? Like I said, there’s a bit of fundamentalism but nothing like the countries on either side.
Owen? External debt is currently around $10 billion.

Overall, excellent I think, the ‘pass notes’ title having added relevance because it was discussing an upcoming football match. It was also reminiscent of a conversation I once had with a football writer in which I said of a match shown on TV the previous night: “Paul Gascoigne’s passing was awful”, to which he quickly replied: “Surely you mean his passing was tragic?” 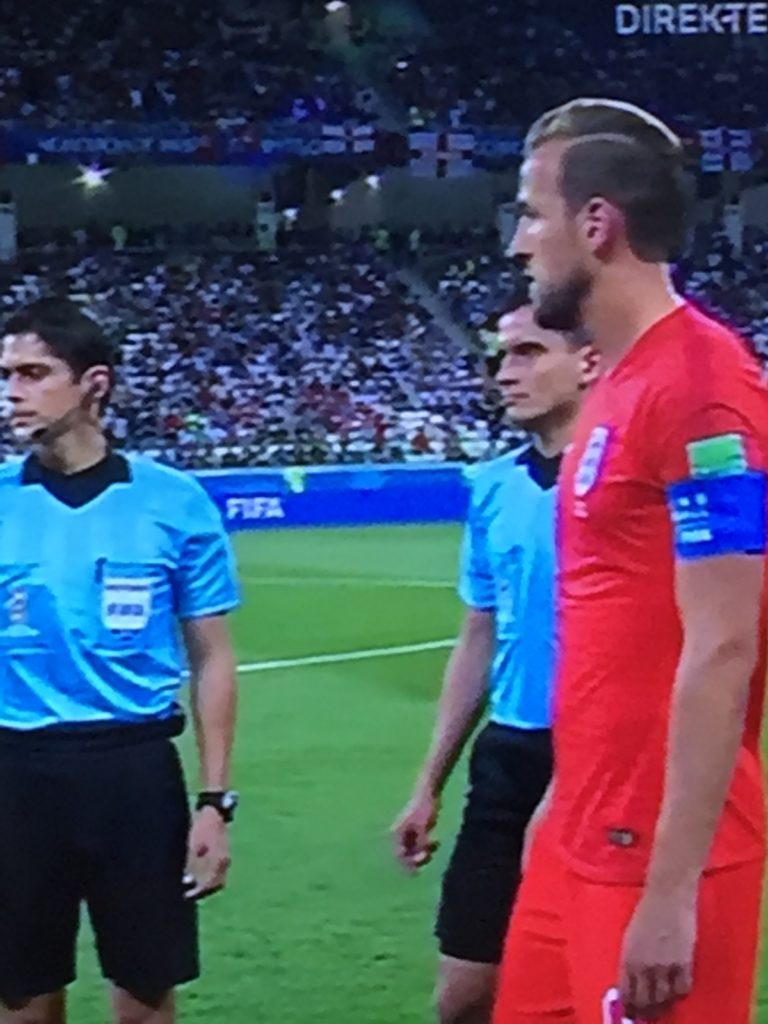 Before the off: the England skipper, Harry Kane, with match officials before his late heroics for England

Moving on to this year, three weeks ago Tunisia had shown something of their talents, or at least their resilience, when they came from 2-0 down to draw 2-2 in Portugal, who are the European champions, in a warm-up friendly. A week last Saturday, they played Spain, the 2010 world champions, and they only lost 1-0 to a late goal from their opponents. It was their first defeat in 10 matches. England had been warned. And they duly got a scare. Admittedly some Tunisia players seemed to think they were engaged in  game of tag-wrestling but in the end England got the job done thanks to two goals from Harry Kane, from a combined total of three yards, with the winner coming in injury time.

England made it out of the group stages in 1998 but came unstuck in the last 16 in a fairly momentous match against Argentina, famous for Michael Owen’s sublime goal, David Beckham’s stupid kick/flick at Diego Simeone for which he was sent off, and the inevitability of defeat in a penalty shoot-out when the match finished 2-2 after extra time. In fact, England have lost six of their seven penalty shoot-outs since losing in the 1990 World Cup semi-finals on penalties to Germany. Their only success was in the quarter-finals of the 1996 European Championships, against Spain, before they lost in the semis to…well, Germany.

Part of the plans to make England better prepared for penalties in the knock-out stages this time – should the team emerge from the group after playing Panama and Belgium in the coming days – has been to study the routine of golfers. I think this is a smart move, albeit it will probably prove futile if/when it comes down it. The traditional comment from football insiders is that there is no point in practising penalties because you cannot replicate the pressure of the real thing on the practice pitch. But the best professional golfers spend hours practising three-foot putts just so that if/when the moment comes and it’s a matter of ‘this one for the Open’, their methodology is honed and the competitor is more inclined to trust his instincts and let technique take over. That’s the theory. However, I fear that if it comes to the crunch in the next few weeks we might find that our football team is populated with too many Doug Sanders’ and Scott Hochs. (Non-golfers should look up the 1970 Open and the 1989 Masters.)

373 thoughts on “FOOTBALL: Twenty years on and it’s Tunisia again”