This coming Sunday will see the staging of the League Cup Final at Wembley Stadium. These days it’s called the Carabao Cup, its immediate previous sponsor having been Carling. But that’s what happens with sponsors; they come and go. I guess that business-wise for Carling their involvement was no longer refreshing the parts the company wanted it to reach. In 1991 the competition was sponsored by Rumbelows and it was won by Sheffield Wednesday, by 1-0 against Manchester United. In the year before the Premier League was announced, United were in the old First Division and Wednesday in the Second.

That occasion remains the last time a team from a lower tier won one of the country’s two premier cup competitions. The trophy, singularly, was presented by the Rumbelows’ employee of the year. Less than four years later, the whole business was bust. From a historical perspective, it’s much simpler to think of the event as the League Cup. (Carabao is apparently an energy drink.) As someone who knows a lot more than I do about sports sponsorship – this not being a particularly exclusive club – explained to me, the ideal is to invent a competition and name it after your product, your brand, as Heineken have done with the rugby equivalent of football’s Champions League. (Come to think of it, there’s a lot of lager about, isn’t there?)

Anyhow, this year’s match will be Arsenal vs Manchester City, with the latter, the runaway league leaders, being hot favourites. But that was the case for their FA Cup semi-final last season, and Arsenal won that by 2-1 despite having conceded the first goal. But that’s the thing about Arsenal and Wembley (an aerial photo of the stadium is shown on the home page). Despite their defeat at the hands of Tottenham Hotspur in a league game there ten days ago, Arsenal’s record at the ground is remarkable. 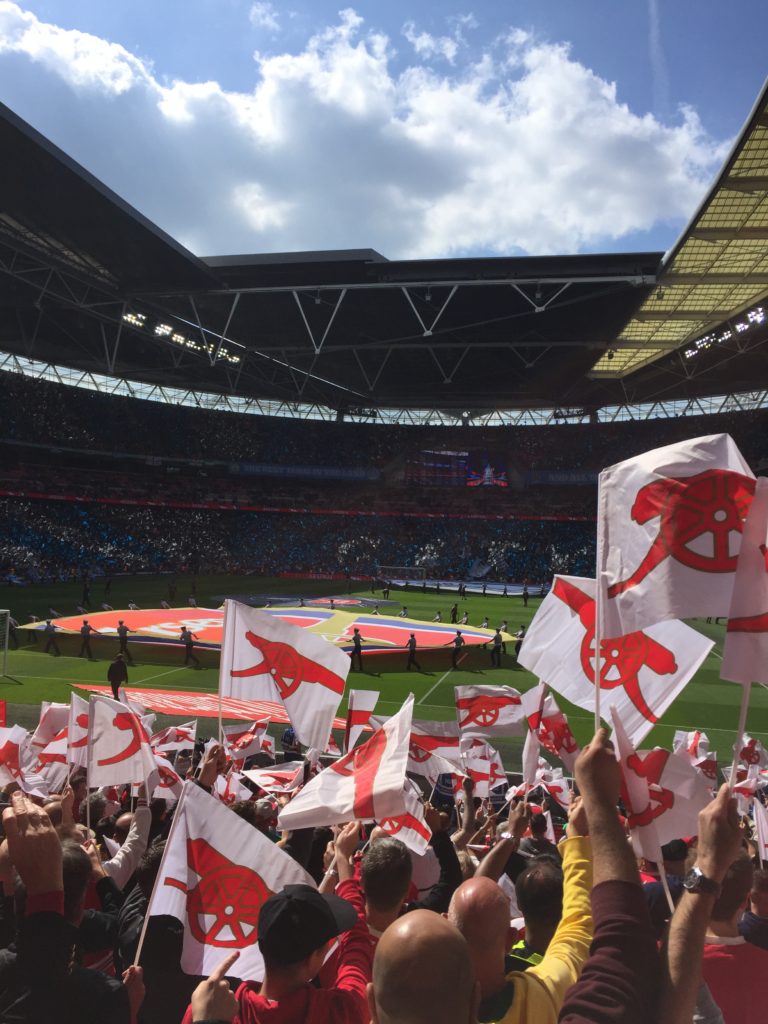 Arsenal fans at Wembley last season, a place where their team took its run to nine consecutive victories

If one discounts the loss to Spurs, for whom Wembley is their home ground in this campaign, Arsenal have won their last nine matches at Wembley when it has been serving in its traditional capacity as a neutral venue. Granted, only four of the nine wins were accomplished within 90 minutes and two of them required penalty shoot-outs, but in three FA Cup Finals, three semi-finals and three Community Shield competitions, the Gunners have been victorious every time. On Sunday we’ll know if it’s 10.