I was in France last week and I was reminded, for the nth time, that coffee there tastes so much better than it does here. I don’t mean that you, me or anyone else isn’t capable of making a decent cup of the stuff at home in Britain, whether with a cafetiere or not. I mean that the fare routinely offered in France – and indeed in Italy and Spain – is not merely borderline drinkable, it’s actually palatable.

In Britain, coffee bought from the likes of Starbucks, Pret A Manger, Costa Coffee, etc is a) branded and b) expensive. Coffee bought from a pavement cafe will likely be iffy. Non-branded coffee bought at a motorway service area might frequently seem like it’s been brewed at the petrol station, with petrol involved. But in France a few days ago, for only €2.50 on an autoroute in Provence, I had a perfect cup of coffee, and not the first one of the week either. I don’t know why this is the case but in my experience it invariably is. 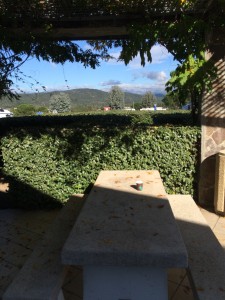 In the foreground, my small cup of autoroute coffee. In the background, the rather larger Alpes Maritimes

Of course, there are worse things than a British cup of cafe coffee. A German cup, for example. And when in the States, I’m none too keen on the contents of a Cona coffee maker, especially when it’s been nicely (not) stewing for an hour or so. And let’s not even think about coffee in Greece and Turkey. Forget the petrol station; that is sump oil.