The Algarve coast of Portugal is a hugely popular destination for British tourists and ex-pats, lured by the year-long decent weather (very warm in the summer months) and excellent value for money, notwithstanding the recent devaluation of the pound again the euro. For example, there’s a native red wine I’m particularly fond of that’s called Porta 6. The beautiful label on the bottle depicts a Lisbon tram climbing a hill while an elderly gent sits outside his house, No. 6, with a glass of red in one hand and a barbecue fork in the other. He’s cooking some sardines while his cat looks on longingly. (Well, I imagine it’s longingly; its back is towards us.) Anyhow, the point here is that in the local supermarket, a bottle of Porta 6 costs €3.50. The same thing in Majestic just set me back £7.99.

The scenario is not dissimilar to the Costa del Sol in Spain. There, away from the coast and the wall-to-wall golf courses, the classic go-to inland excursion is to the glorious village of Ronda. Just away from the same things in the Algarve, the equivalent trip is probably the one to Loulé, a small city of around 75,000 people in the Faro district of the region.

The city’s covered market has been around for centuries. From fresh fish to leather belts, native port to local chorizo, there’s not much it doesn’t sell. (OK, no televisions or CDs but I’m sure you’ll get my drift.) And laces! Goodness, never have I been to a place where there are so many shoe laces for sale. Which, all considered, is quite reasonable, for Loulé is an excellent choice if you’re keen on shoes. My wife can disappear there for hours on end. And wandering the streets in general, as depicted in the photo on the home page, is a pleasant experience. You will not be remotely surprised to learn that the old market area is replete with small bars, coffee shops and restaurants. 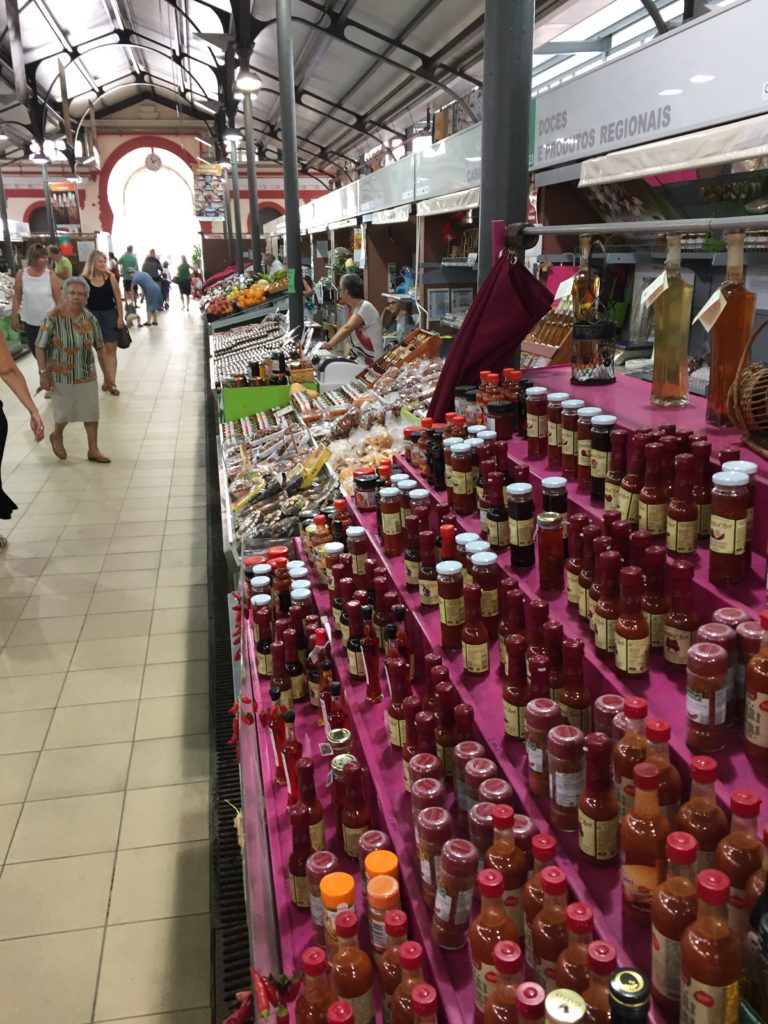 Full up: there’s no shortage of assorted condiments on offer on the shelves of the covered market in Loulé

A highlight of the summer months in Loulé – at least it says this on Wikipedia – is Noite Branca, the Festival of White Night, which is held to celebrate the end of summer. Locals and tourists, clad in all white clothing, fill the town, making it like a sort of Portuguese version of Wimbledon without the tennis. I have not been there at that time of year but I’m sure it would be an enjoyable experience…as well as an excuse to buy a pair of white shoes!