FOREIGN: Bullfighting and some other bull shtick

Bullfighting, hey? Who’d watch it? Actually, quite a lot of people, if they have the opportunity. The photo on the home page shows the Plaza México in Mexico City, the biggest bull ring in the world, with a capacity of around 45,000. As you can see, it looks pretty crammed.

The occasion was the appearance earlier this year of 40-year-old José Tomás, the most celebrated matador in the world. His fans are called Tomasistas and there are legions of them, partly inspired by his reclusive lifestyle – he seldom gives interviews – and more importantly by the daring he displays more than any of his contemporaries in luring the bull to get as close to him as it can, heightening the danger and the sense of theatre. The New York Times described his performances as being “savage ballets, a blend of elegance, fearlessness, timing and sacrifice”.

Of course, we all know who’s going to end up getting sacrificed, but this occasion was no easy pickings for Tomás. The first bull he took on made him pay for indeed allowing it to get so close and he was gored in the back of his thighs. As he lay wounded, helpers led the bull away (note: the bull does not get helpers) until Tomás had recovered sufficiently to be able to return to the fray. This time the bull got its horns under its tormentor’s jacket, lifting and trampling on him. But he evaded the horns and, shortly afterwards, Tomás was bloodied while the bull was bowed. 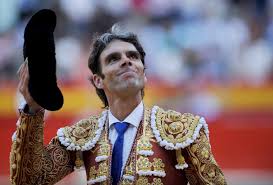 Ernest Hemingway’s famous book Death In the Afternoon, examining the culture and traditions of bullfighting in Spain, was published in 1932. (The book’s title is also the name of a cocktail Hemingway created, a combination of absinthe and champagne, which I’d have thought has the potential to be almost as brutal as bullfighting.) But there’s this thing with the sport, if that’s what it is. We – by which I mean the British and most non-Spanish speaking people – absinthely, sorry, absolutely just don’t get it. Apart from Spain and Mexico, it is practised in Colombia, Ecuador, Guatemala, Peru and Venezuela. They also do it in Portugal, although I gather there that the bull doesn’t get killed, which is certainly more compassionate on the animal-welfare front but seems equally crazy if you’re the matador. It wouldn’t be wise to bank on the bull realising there’s a non-aggression pact in place.

I have been to one bullfight. I was once at a golf tournament in Madrid in May, during the festival of San Isidro, the patron saint of the city. I was informed that I was incredibly fortunate; as a special honour, the organisers had two high-end tickets for the evening’s entertainment. We both knew we’d hate it but my wife and I went along – you know, the “you can’t criticise if you haven’t seen it” argument. The first ’bout’ of the night involved not only a matador on foot but a couple more on horseback. And do you know what? The bull got killed. We left without watching the rest.

68 thoughts on “FOREIGN: Bullfighting and some other bull shtick”