Specifically, and not for the first time as a family, we were entranced in Provence. I think the region is glorious, which I know is not a singular opinion, and in this particular fortnight we were generally blessed with just spectacular weather.

We ventured on three excursions – I mean, one does need the occasional break from swimming, sunbathing and reading. (And, in my case, also from golf.) First off we headed just east of Nice, to Cap Ferrat, to enjoy the Rothschild gardens – or, to give the place and the full potential opportunity of the day-out its full name, the Villa & Jardins Ephrussi de Rothschild. Although we have only once bothered with the villa and we didn’t this time around. The fabulous art collection and captivating grounds were created by Beatrice Ephrussi de Rothschild. The former features a few large paintings, some smart furniture and impressive tapestries – if all that is your sort of thing. I prefer walking the gardens, and looking out to the imposing background of the Alpes-Maritimes. (BTW, spell-check wanted to say ‘Marmite’ there.) 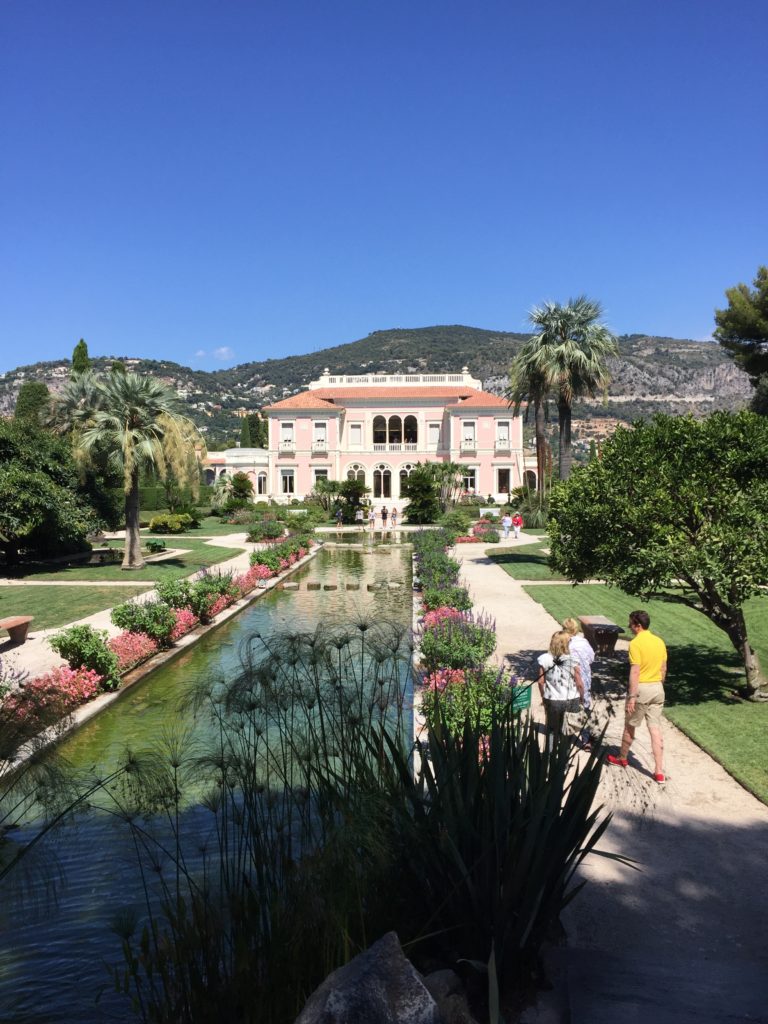 The Rothschild gardens, where (although not in this picture) the fountains play to Canon by Pachelbel

The next trip was to Le Jardin Exotique at Eze Village. To be honest, we thought the main point of paying the six euros entry fee was likely to be for the glorious panorama over the Riviera coastline but in fact the gardens themselves were pretty extraordinary, not least for the way the landscape gardeners have managed to fit so many exotic specimens into such a cramped and vertical environment. The whole thing was constructed after the Second World War on the site of the ruins of an old chateau. And – did I mention? – the views are truly amazing as well as being fairly vertiginous: the sea is 400 metres below you. Also, if you’ve ever seen the movie Rodin, starring Robert De Niro, the big shoot-out was…er, shot in the village square. 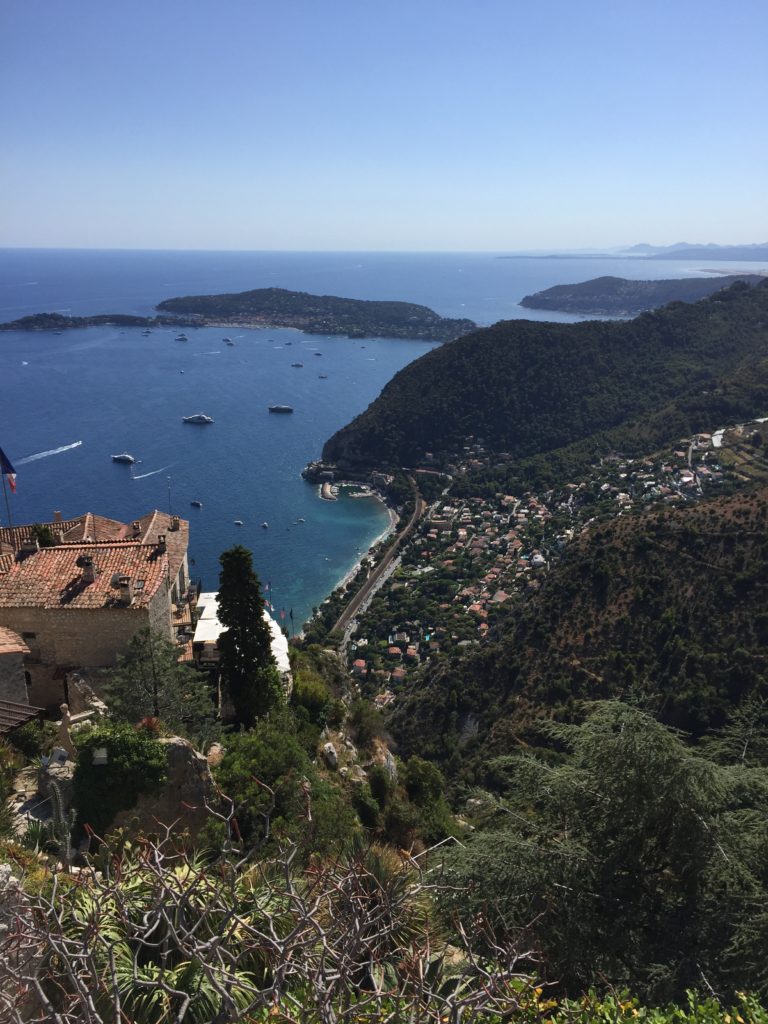 Perched high above Eze Village, the botanical gardens are considerably higher than that above Eze beach

Later in the holiday, we visited Saint-Paul-de-Vence, which is maybe less than 20 minutes drive from Nice airport. It is one of the oldest medieval towns in the South of France but these days it is renowned for its modern-art galleries. Marc Chagall was one of the many famous painters who lived here. Bill Wyman, more of a bassist than an artist, apparently still does at least some of the time. The boules court, a staple of any self-respecting Provencal village, which can be partially seen on the home page, sharing its territory with a brasserie and a few stalls, is a classic of the genre. 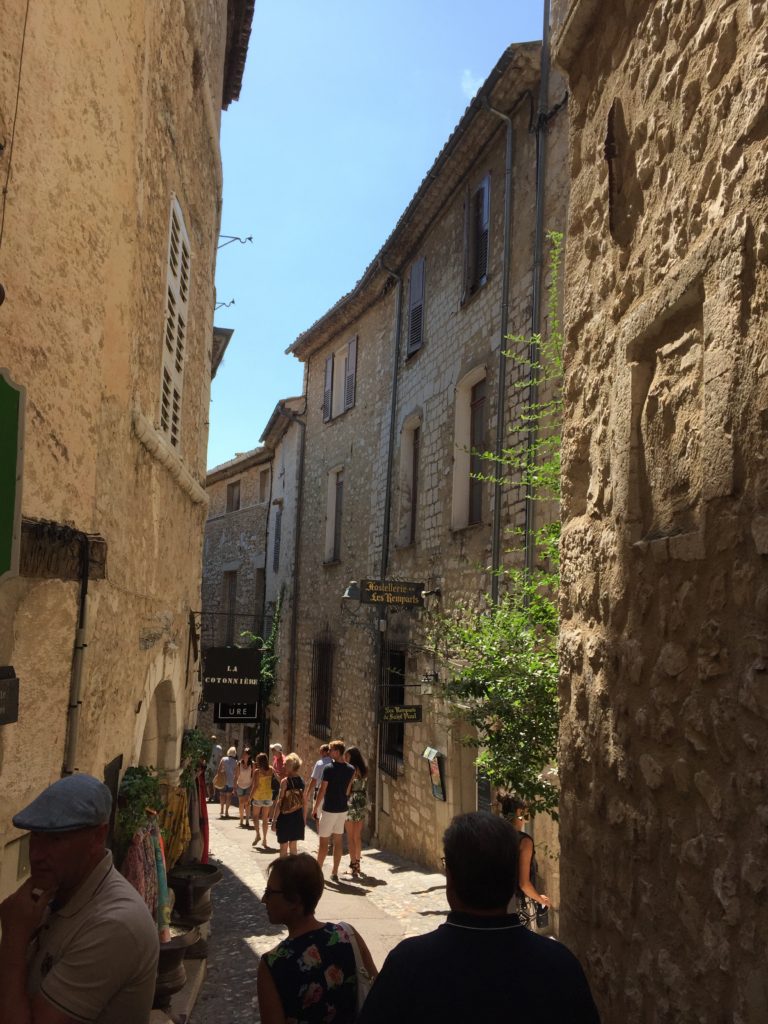 So, after all that sightseeing, I think you’ll agree I deserved a good breakfast. Which is exactly what I treated myself to. 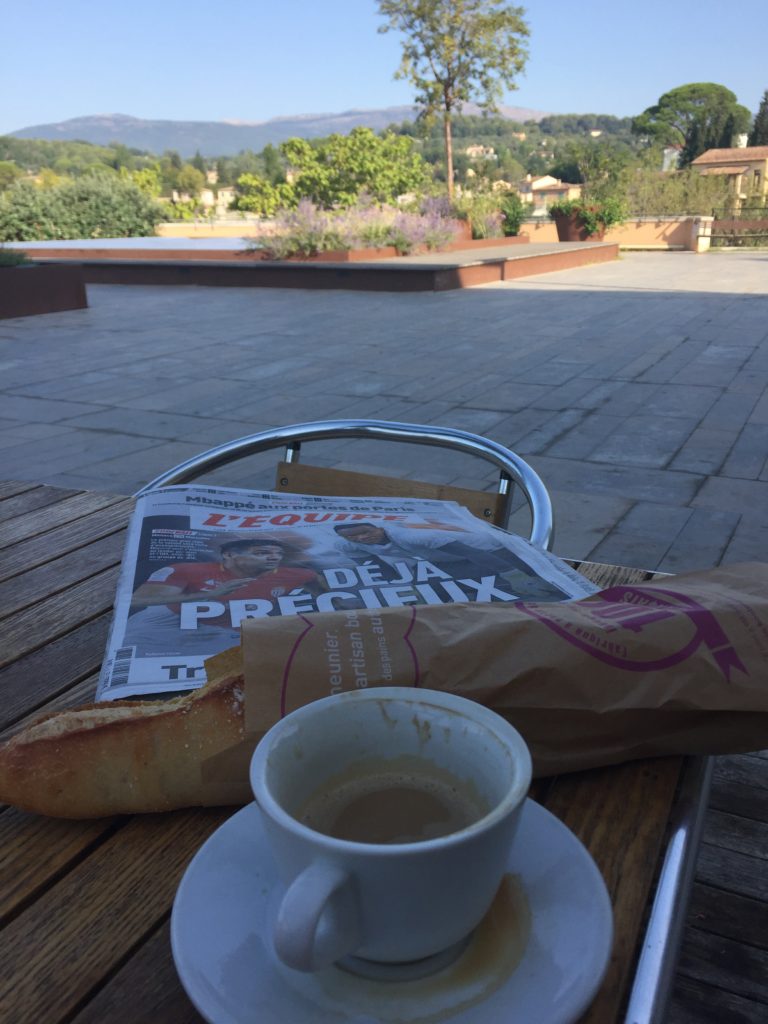 Cafe au lait, a baguette and a copy of L’Equipe: as breakfasts go, you cannot get more French than that!

86 thoughts on “FOREIGN: Entranced in France”