FOREIGN: Loving life in Lisbon…if only for one week

I recently spent a few days with my wife in Lisbon, our first visit there. Strictly it’s not paradise, it’s only Portugal, but nevertheless it is a captivating place. The weather was stunning (OK, that was fortunate in spring, but Lisbon does have the mildest winter climate of any European metropolis) and so are the sights, such as the Jeronimos Monastery and St George’s Castle, which offers a fabulous panorama over the city’s rooftops. But maybe more than anything else, this is a wonderful city for just wandering around, taking it in.

Not that Lisbon hasn’t got enough to recommend itself on a stand-alone basis, but it is also highly evocative of other great cities of the world. I’ll give you four examples. First up, San Francisco. Both are tremendously hilly and in both instances the stupendous inclines are perhaps best negotiated by tram. Furthermore, Lisbon has its equivalent of the Golden Gate Bridge, in this case the bridge over the River Tagus. Many major structures in Portugal are named for either a person or a date, in this case April 25, which refers back to as recently as the ‘Carnation Revolution’ of 1974, an event that witnessed public support for a military overthrow of the then dictatorship. 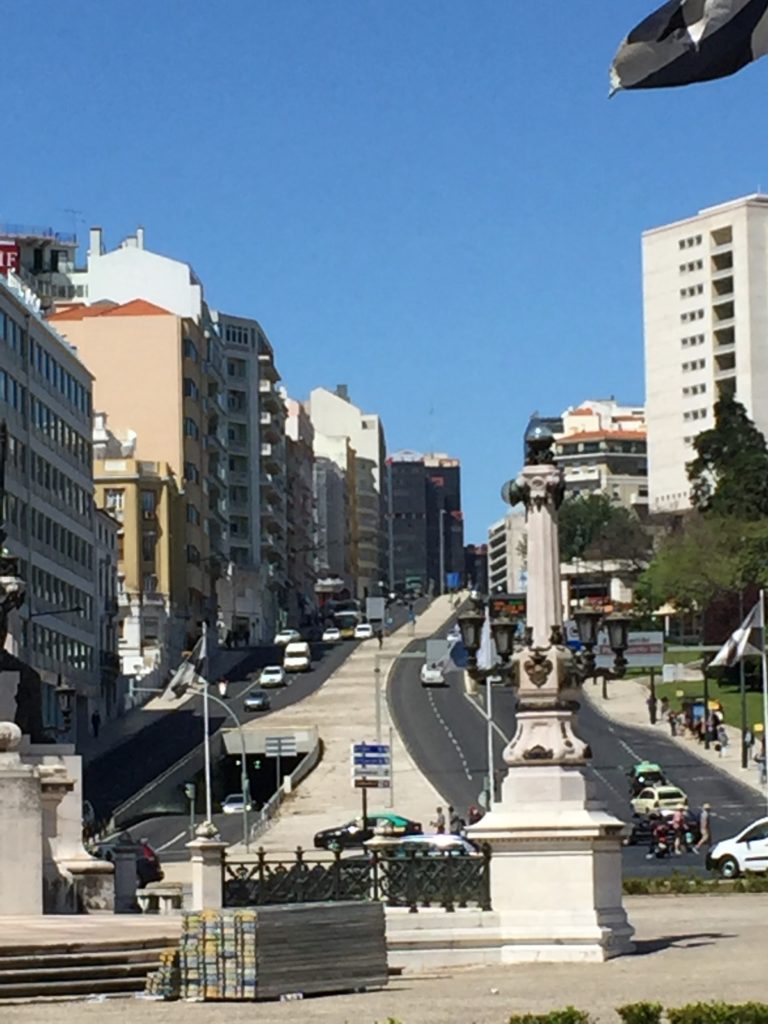 Gosh, that’s a bit steep! Traffic climbs away from the Rotunda Marques de Pombal in the heart of Lisbon

Close by the bridge is the statue of Cristo Rei (Christ the King), an imposing monument on the south bank of the river, which was inspired by the Christ the Redeemer statue above Rio de Janeiro following a visit to Brazil by the chief cardinal of Lisbon. Third, in the heart of the capital, the Avenida da Liberdade is reminiscent of nowhere more than the Champs Elysees in Paris. And, fourth, the Praca de D. Pedro IV – popularly known as Rossio Square – is very like the Piazza Navona in Rome. How awesome a foursome is that?

Not that one would easily get tired of Lisbon but in such a circumstance it really couldn’t be any easier to get away from it. The motorway (A5) out of the city from the Marques de Pombal roundabout shown in the photo above reaches the Atlantic coast in less than 20 miles. That could take you to beaches such as that at Cascais (seen on the home page), an old fishing village turned modern tourist town – but, hey, we were tourists! If you’re feeling energetic, you could walk from there to Estoril along the restaurant-bedecked promenade that runs just above the beach. If you’re feeling foolish, you could lose all your money at the Estoril casino, styled the biggest in Europe.

The best meal we had was at a restaurant called the Decadente (even my Portuguese can run to that translation, though everyone did seem to be fully clothed) in Lisbon’s Alcantara district. Oh, and when you’re dining out, don’t expect to see many screw-top wine bottles. The country is the world’s chief exporter of cork, so it would plainly be unpatriotic for wine producers to undermine their own economy by cutting out the traditional stopper. I think we can all drink to that.