I love big football tournaments. (No, this should not be a football blog.) Euro 2016 in France will soon be upon us and I can hardly wait for England’s traditional quarter-final elimination. The previous huge football event France hosted was the World Cup in 1998 (so only 18 years ago) and that was tremendous. I was fortunate enough to be invited to the opening match – Brazil vs Scotland at the Stade de France – and I remember the match well. I recall we ventured into Montparnasse afterwards but then, to be honest, my recollection does get a bit hazy.

Irrespective of the atrocities which happened there last November, Paris is one of the world’s greatest cities. It always will be. But it’s weird how memories come upon us. I have also been fortunate enough to go to Paris scores of times but even though I went to that match, and also to the David Beckham-inspired England win over Columbia in the group stages in Lens, it may be that my most redolent memory of the whole thing that summer was of the BBC credits that preceded all its broadcasts during the tournament.

The music was Fauré’s Pavane: haunting, atmospheric, melodic. In fact, the first two of those words could probably be used to describe the tension when Beckham was a silly-billy in St Etienne and got himself sent off against Argentina in the round of the last 16. Equally memorable, to me at least, was the so-obviously French brasserie depicted in the sequence that accompanied those credits. 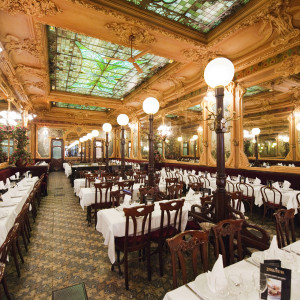 Brasserie Julien in Paris: not 15 minutes from the Eurostar – you could even pop over for lunch!…

In the days pre-Google/Wikipedia, it took a bit more effort to ascertain stuff like this, but eventually I found out that the eaterie in question was called the Brasserie Julien and it was in a northern suburb of Paris. I was definitely going to eat there the next time I was in the capital. The Gard du Nord was so close; it was marvellously convenient to get to by train from London. (To save you the Google yourself, the restaurant is at 16 Rue du Faubourg in St Denis.) It’s a classic French bistro. I mean, you don’t have to have steak frites but it would be no bad idea if you did. As for the decor, the restaurant styles itself as “the most feminine of the art nouveau brasseries”. I’m certainly not competent enough to indulge in gender stereotyping when it comes to interior design, but if they mean that it’s beautiful then I think they’re right.

BTW, do you remember the ITV theme tune for World Cup ’98? FYI, it was Jean Michel Jarre & Apollo Four Forty with Rendez-Vouz 98. Actually, it’s pretty catchy – unlike a namesake goalkeeper I could mention vs the United States for England at the World Cup in South Africa in 2010! Now that would be a football blog.