FOREIGN: Playing it by the book

It is not always easy to arrange but I do think it can be quite a rewarding plan to make sure that at least one book you read while on a trip abroad relates to the place you’re visiting. Obviously, in real life as in fiction, dystopian things happen in nice places, but nevertheless I think it’s a cool idea. This was something I managed to achieve on a recent visit to the Costa del Sol in Spain, taking with me the late J.G. Ballard’s 1996 novel, Cocaine Nights. The Club Nautico in Estrella de Mar (both fictional locations) may or may not be based on the Marbella Club but I find it impossible to think that Ballard didn’t draw some inspiration for Estrella de Mar from spending some time at Puerto Banus. Some of the characters who inhabit his book are very high-end, low-life euro trash. They would be very much at home in the real thing.

This being a Ballard book, what superficially seems like paradise quite quickly assumes an aura of deceit, depravity and violence. (None of that sort of stuff happened to me, of course.) He describes the drive heading west from Gibraltar: “Near Sotogrande the golf courses began to multiply like the symptoms of a hypertrophied grassland cancer.” One such is pictured on the home page. 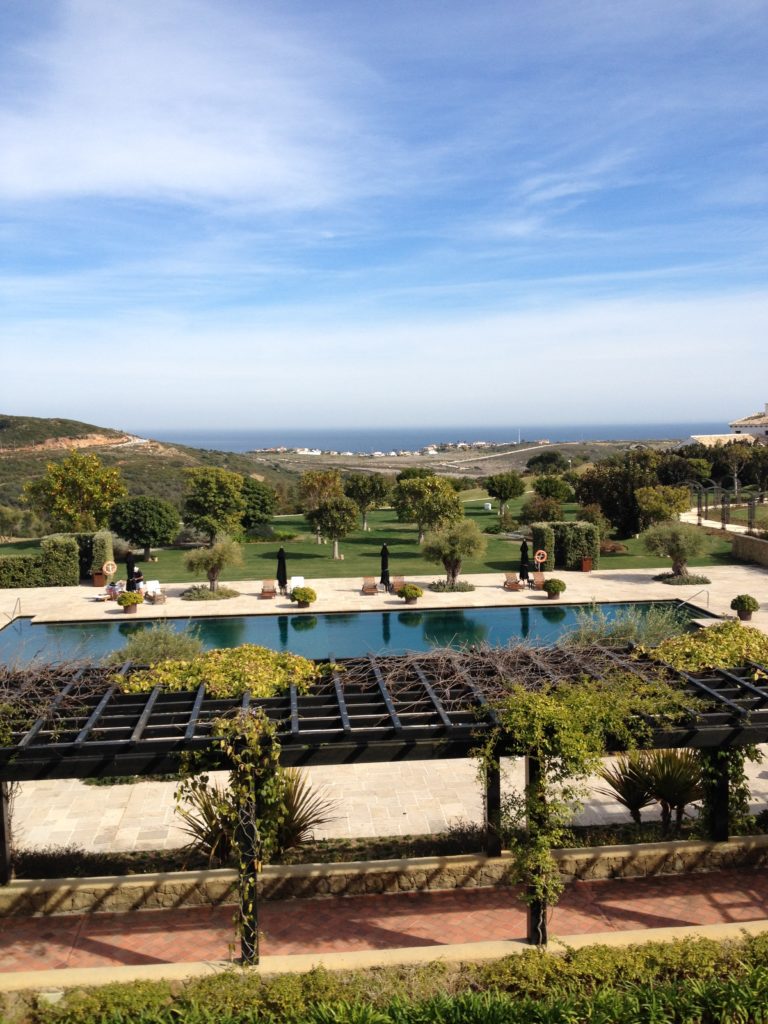 “Pools and no one swimming”…”They’re Zen surfaces; breaking them is bad luck” – reality imitates fiction

Another line from the book reads: “The Costa del Sol is the longest afternoon in the world, and they’ve decided to sleep through it.” The words in the caption above are also lifted from Ballard’s fiction. So does all of this mean that it’s weird I should want to spend any time or money a few miles along the coast from Malaga Airport? I don’t think so.

Granted, the Costa del Sol is not everyone’s cup of tea – albeit you’ll have no problem scoring one of those, even if it’s likely to be on the tepid side. But one of the purposes of going abroad, surely, is to experience scenarios you would not find at home – which makes those Spanish and Italian resorts that heavily promote fish and chips and the like seem a little pointless unless comfort food in the sun is your prime objective. Travel broadens the mind, they say, and I do think it’s more enjoyable to arrive on the Costa del Sol rather than the travelling hopefully bit. But do remember to take an appropriate book with you. And, hey, the overall philosophy behind that thinking gives you another excuse to re-watch Casablanca before you next go to Morocco.

The author Deborah Levy recently wrote that Cocaine Nights was the novel that had most influenced her writing. She said: “Ballard asked a provocative question: what kind of personality will flourish in the 21st century? He decided it was the psychopath and set about chasing his arguments by creating Bobby Crawford, a charismatic but reckless tennis coach in a wealthy expat community in Spain. Ballard looks at the boredom of endless consumerism and leisure. He was interested why people will follow and support a man who is clearly dangerous and damaged, but somehow exciting and desirable.”

Put another way, perhaps, was Ballard a couple of decades ahead of his time in foreseeing the appeal of Boris Johnson? Certainly, a few continental politicians might feel that the British PM regards them as euro trash.