FOREIGN: Winner of the World Cup of Wealth. And of War?

The government of Qatar has a major project. Qatar National Vision 2030 (QNV 2030), announced in October 2008, is a huge overview of where the country wants to be in 13 years time. And they’re working on it. Man, are they working on it. The buildings, the traffic, the road works, the rubble. All seem endless. The code name for the airport of its capital, Doha (in reality the only place of substance in a country that’s about the size of Yorkshire), is ‘DOH’. I wonder if Homer Simpson has been there?

The Gulf state emirate is governed as an absolute monarchy by the al-Thani family. It has a population of around 2.6 million people but only just over 300,000 of those are Qataris. Per capita, they are the richest people in the world, although not many of us are unaware that they pay their migrant workers terrifyingly small wages and enforce laws which means that many of them are effectively enduring slavery. I’ll get on to the 2022 World Cup in a moment.

In June, several Middle East countries announced a blockade against Qatar to prohibit trade, travel and other communication. The sanctions were levied by such as Saudi Arabia, the United Arab Emirates, Bahrain and Egypt. The former is the only country in the world to have a land border with Qatar, so this was quite some weapon to bring to bear. (My flights to Doha,, out and back, were no more than a quarter full.) The reason for this was Qatar’s alleged support for terrorism. Some people I spoke to in Doha blamed President Trump for this – what’s new? get in the queue! – because of his cosying up to the Saudis through their mutual antipathy towards Iran, and they felt that Qatar had rather got caught in the crossfire. I know close to zilch about Middle East politics but for sure this has caused serious downside for Qatar. 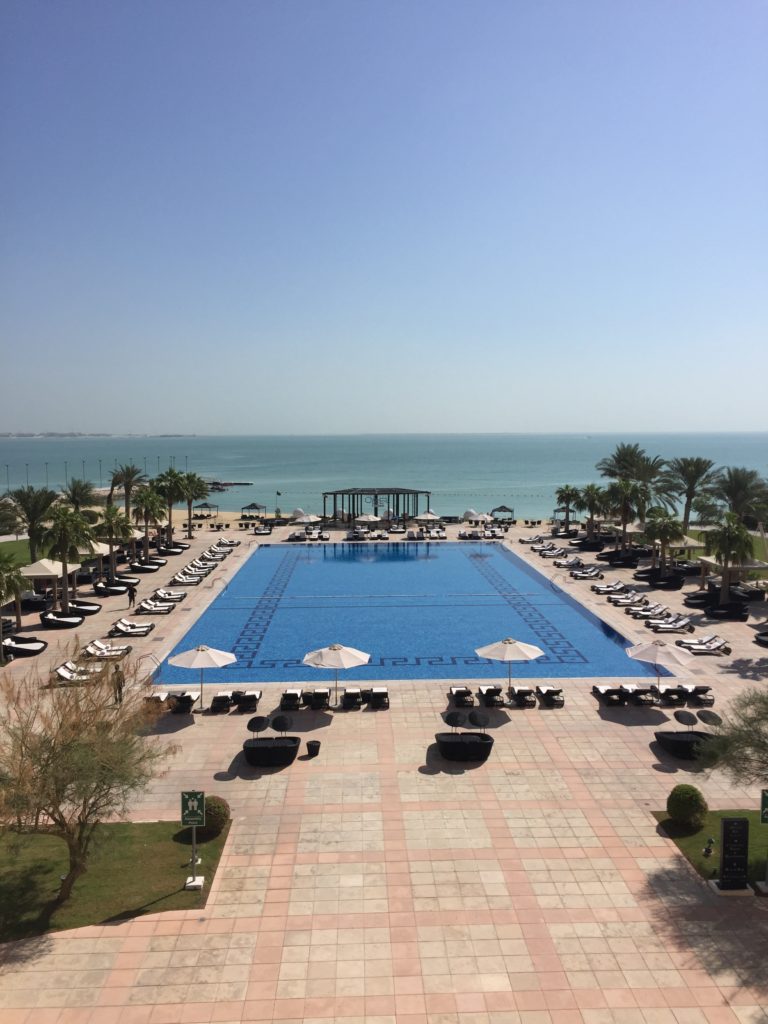 The pool at the hotel, which is also depicted on the home page: it was a bit too hot for sunbathing, though

For routine business life, the situation is bleak. One guy I spoke to used to be a regular on the Dubai-Doha shuttle, a trip of about an hour. But now there is no direct connection. The week before I met him, since that journey now has to be undertaken via Oman, a cancelled flight and some other stuff meant the whole process took him 13 hours. He also talked of knowing a guy in Qatar who can now no longer send money to his mother in Saudi Arabia because the respective banks won’t do business. Someone else mentioned knowing a Qatari guy with a Bahrainian wife; the only way they could go on holiday together was in a third country. More parochially, one British guy I talked to said the biggest thing for his family had been the milk. It used to come overland from Saudi. Now it comes by sea from Iran or Turkey. “My kids hate Turkish milk,” he said. Matters have come to a pretty pass when a Brit can’t get the milk he likes to have with his breakfast tea! Perhaps more seriously, Sheikh Tamim bin Hamad al-Thani, the main man, last week told CBS television: “I am fearful that if anything happens, this region will be in chaos. They [the rival nations] want regime change.” The sheikh added he was prepared to accept Donald Trump’s offer to mediate. Now, if that isn’t a recipe for chaos, I’m not sure what is. Forget the Great British Bake Off. This could be the Great Middle East Face Off. Without Noel Fielding.

Doha is where Andy Gray and Richard Keys have fetched up since their abrupt removal from Sky’s football coverage. On a grander scale, there is the looming matter of the 2022 World Cup. One worries about the fans – and, no, I don’t just mean the heat. I mean the comparative paucity of alcohol. Many ex-pats in Qatar think Dubai will be missing a trick if the travel ban remains. They figure many westerners would go to watch their team play in the World Cup in Qatar and then fly back to Dubai later the same day to stay there, where the licensing laws are more lax, in between matches. Having said that, any such fans might need to be rather careful about slightly touching anyone in a bar there, given the recent very scary case which only got resolved when the ruler of the country intervened to grant a pardon to Scotsman Jamie Harron who had been imprisoned for doing that very thing…in an effort to make sure he didn’t spill his drink!

In a column in The Guardian last month, Marina Hyde noted that the chief of security in Dubai had opined the blockade would end if the World Cup went elsewhere. “If the World Cup leaves Qatar,” he said, “then Qatar’s crisis will be over…because the crisis is created to get away from it.” He later explained he meant that Qatar had turned a regional spat into a crisis because it was looking to get out of staging the World Cup – “the cost is bigger than the [ruling family] had planned”. Put another way, he is saying we are on the verge of a full-blown Middle East conflict, perhaps supervised by The Donald, because the World Cup has got too expensive for the richest country in the world to organise. It’s all mad.

Who knows where this will all end. Or if it will?