FUN: A game to drive you crazy

I am very keen on crazy golf, even if – as with the real thing – I’m not very good at it. For example, when one Michael Smith won the British Minigolf Association (BMGA) British Open at Margate in 2012, he had nine holes-in-one in his second round of 28 – which means he must have taken a three somewhere! I took nine on a crazy golf course in France last summer, which I’m very capable of doing while playing the ‘real thing’, thank you very much. 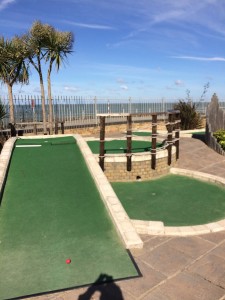 Nice to be beside the seaside: Strokes Adventure Golf in Margate

Does crazy golf have much connection to the main game? Well, during this year’s Open Championship (the other one; the one that Zach Johnson won), the tremendous winds that buffeted St Andrews, causing play on Saturday morning to be suspended after 32 gale-lashed minutes, created what Geoff Ogilvy called “circus conditions”. On the 13th green, Louis Oosthuizen had a three-foot putt which became a one-foot putt and then an eight-foot putt, all of this without him ever touching the ball. If that’s not crazy golf, I don’t what is. The previous month during the US Open at Chambers [of Horrors] Bay, in non-weather related remarks, Patrick Reed described a putt he had on the 18th green as “Mickey Mouse golf”. Not so very different, then.

Adam Kelly was the winner of this year’s BMGA British Open, again contested at Strokes Adventure Golf in Margate. I might add that whereas Johnson got the claret jug, the gold medal and a cheque for £1.15 million for becoming the “champion golfer of the year” in the real deal, Kelly collected the BMGA British Open trophy, a gold medal and £500. If you aspire to follow in the footsteps of champions, the green fee is £4.50 (children £3.50), putter and ball provided. Sorry, that’s at Margate, not St Andrews.

81 thoughts on “FUN: A game to drive you crazy”