A visit to the Centro Botin in Santander, itself a gloriously located small city (population about 170,000) in Cantabria on Spain’s northern Atlantic coast, is a marvellous experience, especially if it’s done in the kind of weather the city was blessed with when I was there last month. And the enjoyment is to be found both inside and out. 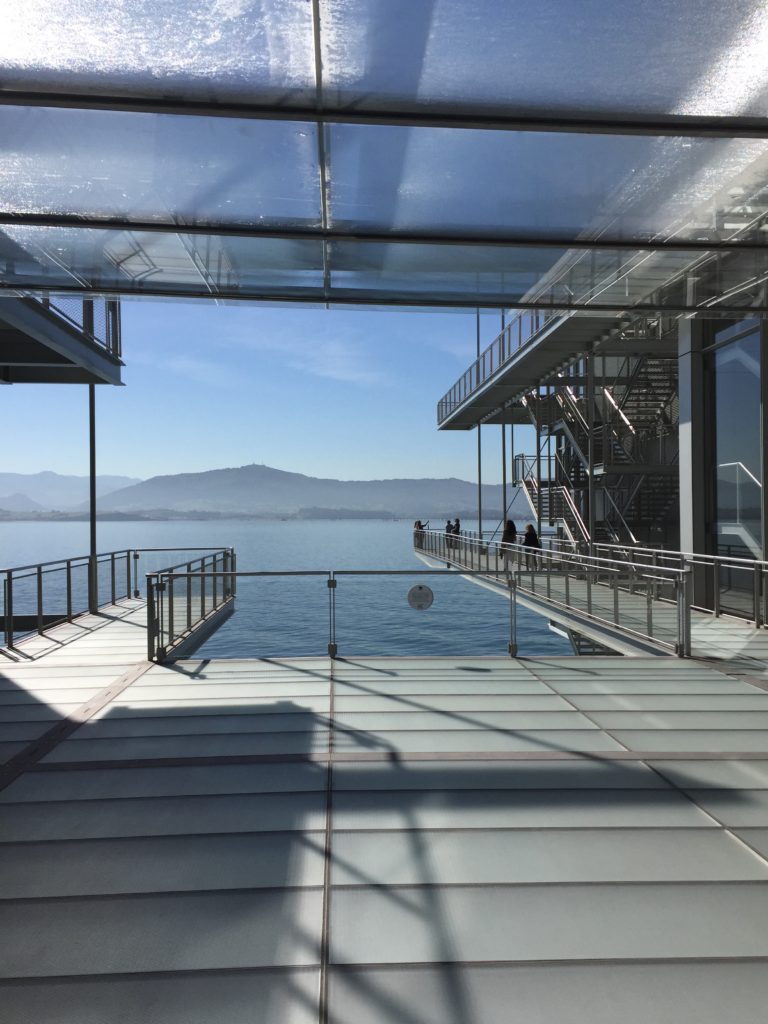 Renzo Piano said of his creation: “I wanted the building to fly”; from here it feels more like you’re sailing

The Centro Botin (depicted on the home page) was designed by Renzo Piano, an Italian architect of substantial renown. The building is effectively on stilts, which means the sea remains in view even from the landward side of the building. The columns which elevate the main structure above the ground are at the same height as the trees in the neighbouring Pereda Gardens, emphasizing the intention that the centre should enhance its environment rather than detract from it. Indeed, prior to its existence, a proper view of the coast was denied by an old port and the hectic road that separated the city from the water. Now the waterfront is an amenity that can give pleasure to everyone. The two lobes which constitute the structure are joined in the middle, and both from inside and out there is the sensation that one might be on a ship setting out to sea.

The project was funded by the Botin Foundation, a charitable trust founded by the family of that name who also founded the Santander bank. There is an educational programme which provides cultural guidance and encouragement for young people, but for the visitor to Santander the main attraction of the building will be for its cultural entertainment value. 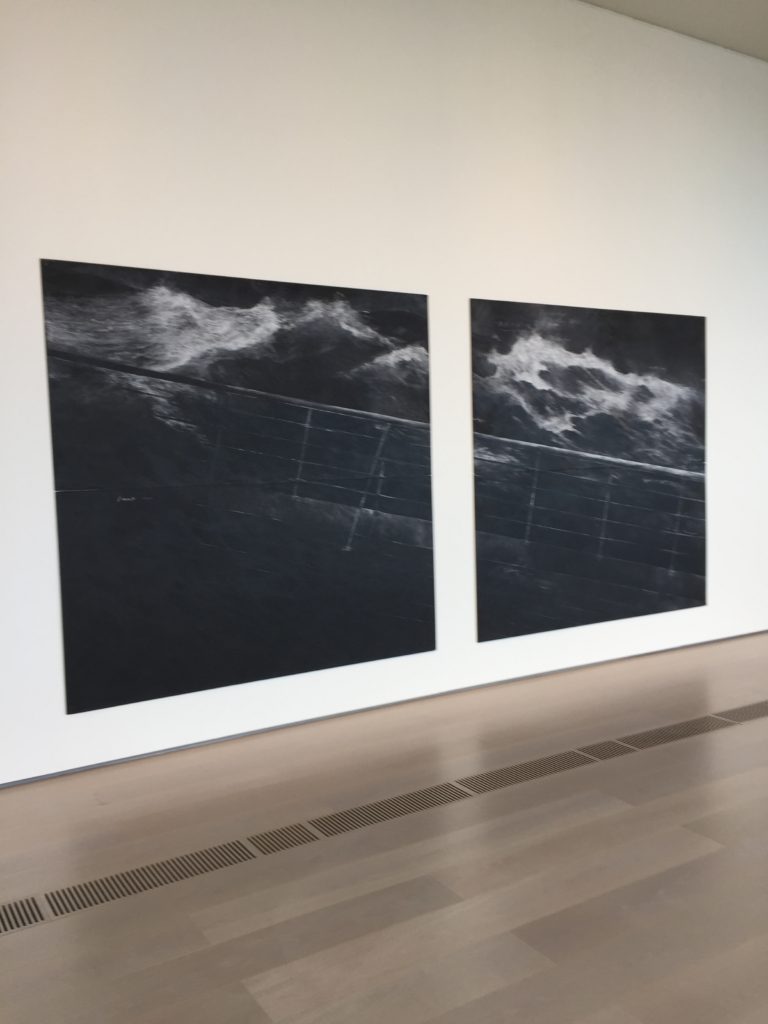 Drawn on two blackboards, The Wet Prayer is inspired by a Rudyard Kipling story about a shipwreck

Several of the exhibits inside are stunning; indeed, as spectacular as the views out to sea and across the bay as seen through the gallery’s huge windows. The work shown above, by a British artist called Tacita Dean, features a very clever use of white chalk, which at times is vividly white – to portray the stormy sea – but elsewhere is extremely subtle. The overall effect may be something like 50 shades of grey. A local artist, Juan Uslé, is represented by one of his Manthis paintings: a series depicting in a colourfully abstract fashion the act of sexual cannibalism, in which the female devours the male during copulation. (Think of it as a kind of severely upgraded reverse Harvey Weinstein situation.) Among the works of the late Juan Munoz, a Madrid artist, is an untitled sculpture in which the ripples on the character’s coat look so real you could swear you’ve seen it move. And talking of Madrid, with the current fraught political atmosphere in Spain given the stand-off over Catalonia, the 1999 artwork by Fernando Sanchez Castillo set at the Valle de los Caidos (‘Valley of the Fallen’), an emblematic site of the Franco regime, may seem more pertinent today than it was 18 years ago. 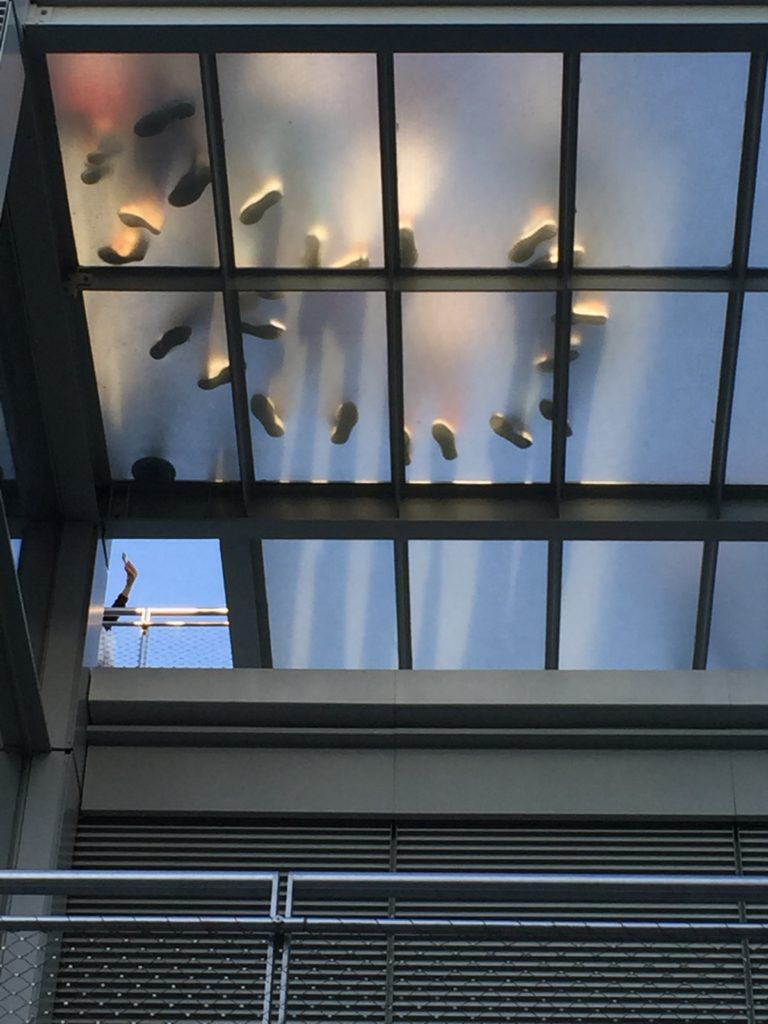 On our way out, a look upwards at the external stairwell of this intriguing edifice produced the view above. Photo-footsy, I guess you might call it. But then it is a fun building.

57 thoughts on “FUN: A new cultural treasure for Cantabria”