FUN: Brighton rocks – if sometimes a bit too literally!

What is it with Brighton and the ‘P’ word? Or words? There’s the famous Brighton Pavilion, there is still one celebrated Brighton Pier (as photographed on the home page), and opposite the burnt-out wreckage of the destroyed and defunct West Pier there is now the Brighton Pole. OK, it’s real name is the British Airways i360, but you’d have to agree that’s not nearly so catchy as calling it the pole.

This erection was the brainchild of Marks Barfield, the husband-and-wife team of David Marks and Julia Barfield who also created the London Eye. It cost £46 million and already its observation tower, a vertigo-inducing 140 metres above the promenade, has become one of Brighton’s main attractions. Admittedly, though, it did suffer one temporary (albeit notable) glitch last month. You see, the bar is on the south side of the tower and one evening in September a sufficiently substantial number of the 200 people aboard decided pretty much simultaneously that they needed a drink and made the move from looking out over the town to venturing towards acquiring one. The sensors had, it seems, been calibrated with too little tolerance, and when the gentle stampede occurred, the pod went into lockdown. The understandable anxiety – OK, let’s say probable panic – of the visitors was inevitably exacerbated when they were instructed exactly where to stand so that the pod’s mechanisms could be re-set. It’s rather like what happened to Millennium Bridge in London when that was opened to the public for the first time; it was too bouncy for people to walk on. And there’s not much point to a bridge which no one can walk on… 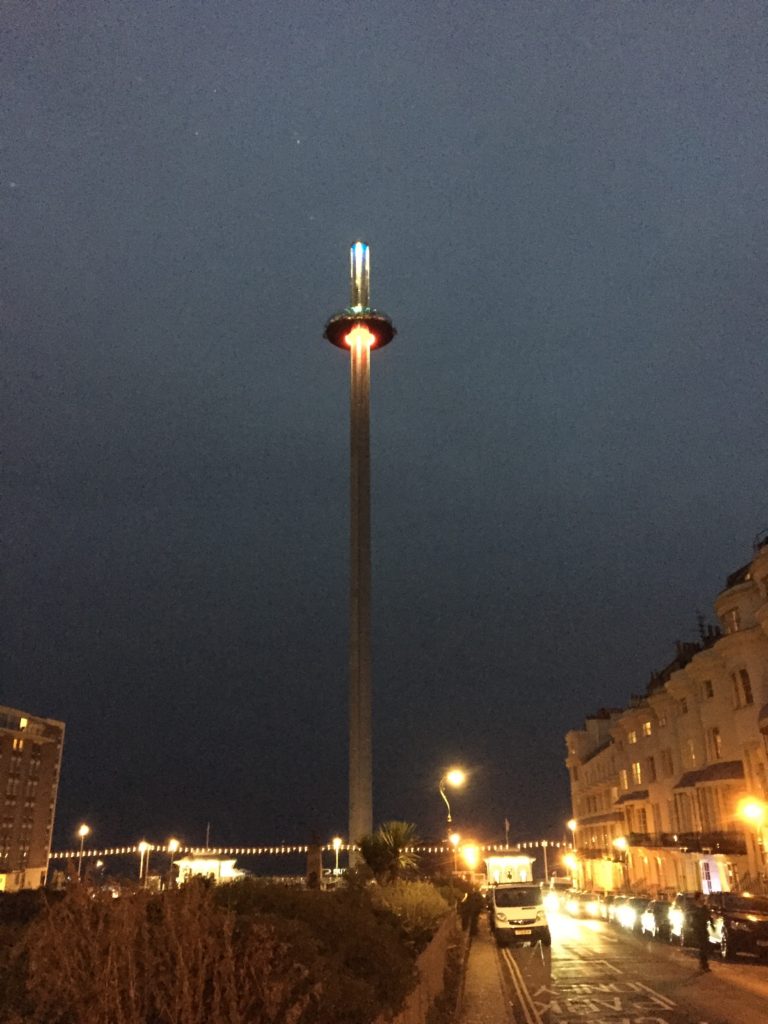 Anyhow, all is now well with the i360. It took Marks Barfield 13 years to make the journey from concept to completion and, apparently, the views from it are stunning, not only of Brighton’s grand cream-coloured Regency terraces but on a clear day the white-faced Seven Sisters cliffs are in view. I say ‘apparently’ because, as you can tell, when I was there it was past sunset, but while there is bound to be a kind of incongruous relationship between a project that is so high-tech and a traditional seaside resort where the most complex gadget might traditionally have been a kiss-me-quick hat, overall the tower not only stands out but withstands aesthetic scrutiny. Remember, the London Eye didn’t get uniformly welcoming reviews when that opened, yet it is now regarded as one of the highlights of the capital’s skyline.

At ground level, too, Brighton is fascinating. Its renowned lanes are well worth exploring for eating, drinking and/or looking around. There is a distinct atmosphere to the place – urban louche, if you like – which renders those occasional ‘London-on-Sea’ comparisons not without merit. The late journalist and author Keith Waterhouse loved Brighton just about as much as he did Soho, the latter being the title of a novel he published in 2001. His famous description was “Brighton is a town that always looks as if it is helping police with their inquiries.” Like the French Riviera, “a sunny place for shady people”, it is still manifestly alluring in many ways.

49 thoughts on “FUN: Brighton rocks – if sometimes a bit too literally!”