FUN: Floyd at the V&A – where pigs do fly

Last month I went to see the fabulous Pink Floyd exhibition, Their Mortal Remains, at the Victoria & Albert Museum in South Kensington. Entering the show (for it is hard to regard this homage to one of the most successful bands ever as anything other than a concert without a stage), one is greeted by a quote from the late disc jockey, John Peel: “They could have joined the audience at one of their own gigs without being recognised.” They did indeed let their music do the talking. Heck, they even made one album, The Wall (1979), which ended in concert with the group being hidden behind one. Remarkably for a band who aside from two early singles – Arnold Layne and See Emily Play – mostly didn’t release any 45s, the one that come off that album, Another Brick in the Wall (Part 2), was a Christmas No. 1.

Their music will assuredly live on but otherwise the Floyd are as mortal as the rest of us. Syd Barrett, the original lead guitarist, has long departed this world. When he departed the band, as described in the marvellous book Inside Out: A Personal History of Pink Floyd by the group’s drummer, Nick Mason, Barrett wasn’t so much sacked for his unreliability and drug misuse as left to realise that he had been replaced by Dave Gilmour because it was the latter who was taking part in rehearsals. Gilmour is still around, as is Roger Waters – although essentially they’re apparently not talking to each other – but the keyboard player, Richard Wright, passed away in 2008.

As one would expect, due prominence is given here to The Dark Side of the Moon, the concept album Pink Floyd released in 1973 and which has shipped around 50 million copies, making it one of the biggest-selling albums in history. Its distinct and now iconic cover image of light emanating from a prism was designed by Hipgnosis and established their own brand. Two years later came Wish You Were Here; this time Hipgnosis had come up with two businessmen shaking hands, one of them on fire. That was supposed to represent a Floyd lament about the capitalist nature of the music business (although I note that entry to Their Mortal Remains is far from free). That image was perhaps the inspiration in Rob Reiner’s 1984 movie, This is Spinal Tap, for the notion of that band’s drummers spontaneously combusting? For the 1977 LP, Animals, Hipgnosis had an inflatable pig hovering over Battersea power station. (See photo on the home page.) At one point the pig broke free, which could have endangered traffic into Heathrow. 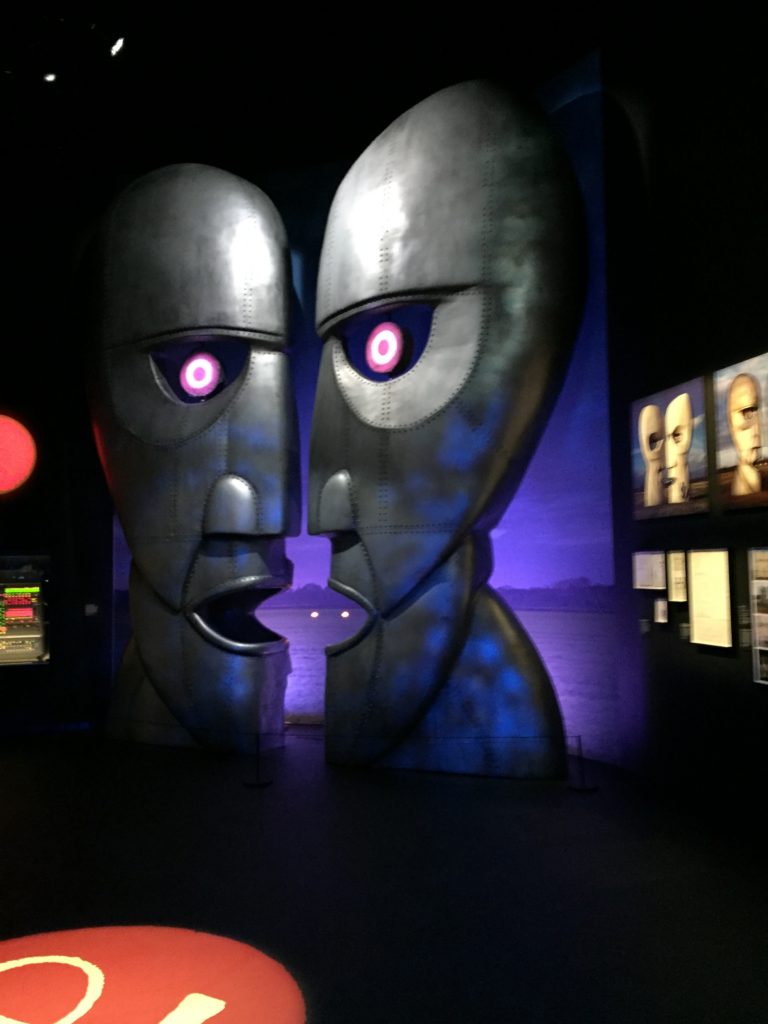 Non-talking heads: the two cover stars of the The Division Bell album are on big display at the V&A

Their last album was The Endless River (2014), which contained a few out-takes amid material in what was a tribute to Wright from Gilmour and Mason. The last ‘proper’ album was The Division Bell (1994), a terrific record on which the cover featured two giant-headed figures either side of Ely Cathedral. They are indeed – like the band in some respects – larger than life. The gig (sorry, exhibition) concludes with the band’s performance of Comfortably Numb, from The Wall, at the Live 8 concert in Hyde Park in 2005, a song which is itself followed by an awkward group hug. But there is nothing awkward about this show. It’s compelling. It runs until October 1 and you really should try to get there.