FUN: Just messing about on the water…but don’t go messing with the rules

While London is renowned throughout the world for its myriad famous buildings and landmarks – the Tower of London, the Houses of Parliament, Buckingham Palace, the London Eye, Madame Tussauds (Lord knows why) – it is the quality and quantity of its parks and open spaces which contribute enormously to a resident’s sense of the well-being that can be enjoyed despite living in such a teeming metropolis. Hampstead Heath, Richmond Park, Hyde Park and Green Park are among these. So, too, is Regent’s Park, just north of the West End and to the east of Camden Town. And here you can get away from it all for a while on the water.

On the scenic lake there are rowing boats and pedalos, and they’re free to hire. Well, actually you have to pay a £5 deposit, but you get that back so long as you don’t overstay your welcome or commit some infraction, which we’ll get to in a moment. Before or after your aquatic exertions, you might like to have a snack at the lakeside cafe, which serves the likes of pizza and macaroni cheese. On a sunny day, this is an especially pleasant thing to do on the terrace outside – a kind of pier garden, if you like. 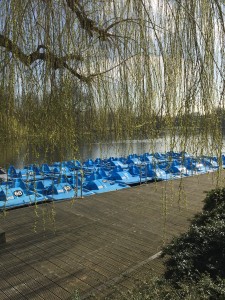 Awaiting your pleasure: an array of pedalos in Regent’s Park

Anyhow, back to the boating. When I was a kid I remember going out with my parents in a rowing boat on the sea, an excursion which last about two minutes before my mother claimed to be feeling sea sick. I think the wake of some fish that had overtaken us must have rocked the boat too much. At least at Regent’s Park there are no waves to disturb the serenity of the occasion, but Camden Council is taking no chances of anything else going wrong.

Every vessel must “include a responsible adult over 18”. As opposed to irresponsible, I suppose. You must not drink or smoke. You mustn’t stand up or rock the boat. (I think they mean this literally rather than metaphorically.) You mustn’t take a dog with you, although interestingly there’s no mention of cats. Or guinea pigs, come to that. You may not disembark to explore any of the small islands. You may not swim, although in fact you would have to be intoxicated, which is not permitted, to even think of doing that in there.

If the water is not for you, Regent’s Park is a lovely place for a walk: maybe have a drink or a meal, perhaps watch some random game of rugby or baseball (yes, baseball) which happens to have broken out. The park is also home to the American ambassador’s splendid residence, Winfield House, set amid 12 acres of gorgeous London greenery, and to the huge Central London Mosque to the west side of the park, close to the boating lake. And it’s the home of ZSL London Zoo. Just don’t try to borrow one of the animals to take out in a pedalo; I’m guessing giraffes are covered by the dog prohibition.